Watching the National Prayer Breakfast as an atheist is really an act of masochism. To see the separation of Church and State made a mockery by national leaders is like nails on a chalkboard. So don’t worry — I did it for you.

Most of it was what we’ve come to expect from such affairs, but it was the comments made by Speaker of the House Paul Ryan this morning that truly highlighted the crux of the problem with the Religious Right and public office (32:40 – 36:40): 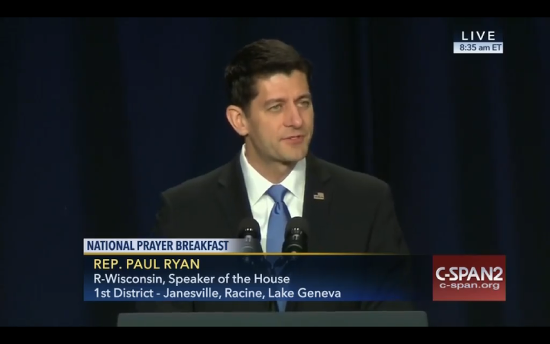 This breakfast is a national tradition because prayer is a part of our national heritage. It goes all the way back to the Declaration of Independence. We believe that our rights come from God. And our job, as office holders, is to protect those rights. So it is only natural that we should ask for his guidance as we seek to do his will.

I’ve noticed a growing impatience, though, with prayer in our culture these days. You see it in the papers, or you see it on Twitter. When people we say we’re praying for someone or something, the attitude in some quarters these days is, “Don’t just pray — do something about it!”

Thing is, when you are praying, you are doing something about it. You are revealing the presence of God. Whenever people are in grief, or even when they’re about to start some great undertaking, they feel the worst pain of all: they feel alone. How am I going to get through this? Why is this happening to me? My God, my God, why have you forsaken me?

That is why there is nothing more comforting or more humbling, really, than to hear someone say, I’m praying for you. Because when you hear that, you realize you’re not alone. God is there. And hundreds if not thousands if not millions of people are all speaking to him on your behalf. They’re not praying for some abstract notion, they’re praying  for you, the person.

You know it says a lot about our country that people of both parties and all faiths will drop everything and pray for their fellow Americans. What it says is we believe in the dignity of the individual, of the human person. And that is why prayer should always come first. All Americans believe this.

There are a dozen reasons to be unnerved by this statement, but they cumulatively drive home the central problem with today’s conservative approach to governance: they cannot respect separation of church and state because they don’t see it.

If our rights are derived from a Higher Power, there’s no reason to adhere to the Constitution they supposedly revere.

If the goal is to protect dictates from that Higher Power, prayer is a more legitimate form of consultation than reading the Constitution they swore to uphold.

If prayer is action enough, they are absolved from acting to protect the downtrodden or preventing the tragedies they say they care about.

If they think everyone’s on the same page, there’s no incentive for them to change.

One might argue that these are just the words of one Republican, but we’re talking about the Republican currently holding the highest office of anyone in his party. And Ryan is frequently cast as a moderate.

Relative to others in his party, maybe that’s not a completely inappropriate description, but that doesn’t make it any better. The far-right conservatives call for abortion bans. They call for an end to same-sex marriage. They call for the closing of mosques and internment of Muslims. They call for dress codes for women so they don’t get distracted. They call for an avalanche of legal limits that reinforce a Christian worldview.

Adding insult to injury, what they’re calling for is a selective enforcement of that worldview. They don’t want to take away divorce, but they want to make sure people can’t access marriage the way they do. They have no problem raising their own pay 15 times since 1989, or encouraging skyrocketing executive pay in the name of capitalism, but shudder at the thought of enforcing a living wage for others. They hate the idea of drug testing legislators but demand it of those seeking welfare.

Ryan spoke eloquently this morning, I’ll give him that. But the content of his speech? Proof positive that religious conservatives have no place in public office.

Watch the whole event here if you’ve got the stomach for it.

February 4, 2016
Bernie Sanders: I'm Only Running for President Because of My "Very Strong Religious... Feelings"
Next Post