Introducing Ted Cruz at an Iowa event this past weekend, Duck Dynasty star Phil Robertson spent some time railing about what gay marriage supporters are forcing him to swallow. 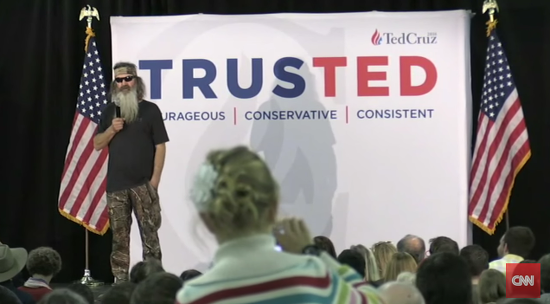 Don’t you understand that when a fellow like me looks at the landscape and sees the depravity, the perversion — redefining marriage and telling us that marriage is not between a man and a woman? Come on Iowa! It’s nonsense. It is evil. It’s wicked.

It’s sinful. They want us to swallow it, you say.

So what is Robertson’s solution to the “depravity” of same-sex couples having the same rights as him and his wife? Well, obviously, it’s to elect Ted Cruz — and to “rid the earth” of marriage equality supporters.

We have to run this bunch out of Washington, D.C. We have to rid the earth of them. Get them out of there. Ted Cruz loves God.

Naturally, this language of ridding the earth of people who disagree with him didn’t distress Cruz. (Not that we’d expect anything less based on past enthusiasm for endorsements from people who say awful things.)

When Cruz appeared on stage, he reflected praise back at Robertson. “What an extraordinary human being,” the candidate said, claiming that “God makes every one of us unique, but some are uniquer than others.”

“What a voice Phil has to speak out for the love of Jesus,” Cruz added. “What a joyful, cheerful, unapologetic voice of truth Phil Robertson is.”

Calling for Christians to “rid the earth” of people who disagree with them might sound a little scary, but as long as it’s done joyfully and cheerfully, we’re cool, I guess.