We know how warped the Jehovah’s Witness mindset is. If you leave the faith, your family is taught to shun you forever in a process called Disfellowshipping.

The February 2016 edition of the Watchtower (Study Edition) offers a clear example of what you should do when a family member who left the faith wants to get back in contact with you: 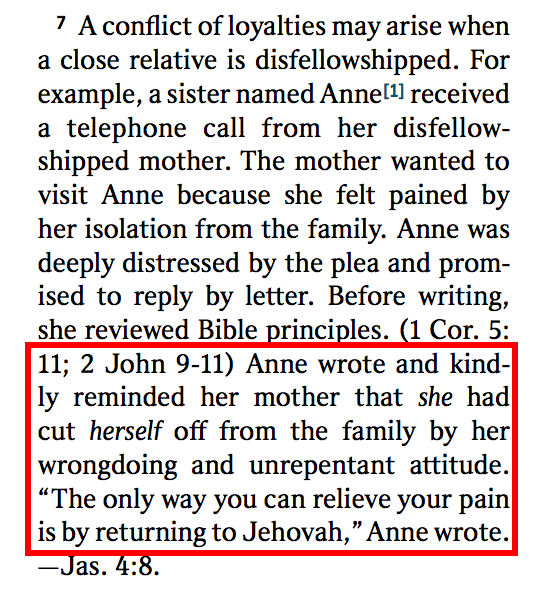 A conflict of loyalties may arise when a close relative is disfellowshipped. For example, a sister named Anne received a telephone call from her disfellowshipped mother. The mother wanted to visit Anne because she felt pained by her isolation from the family. Anne was deeply distressed by the plea and promised to reply by letter. Before writing, she reviewed Bible principles… Anne wrote and kindly reminded her mother that she had cut herself off from the family by her wrongdoing and unrepentant attitude. “The only way you can relieve your pain is by returning to Jehovah,” Anne wrote.

The Church is literally teaching children to cut off contact with their parents if they’re not part of the same religion.

There’s nothing “kind” about that. It’s brainwashing, pure and simple. And telling anyone it’s what God expects of them is deeply disturbing.

I don’t know if “Anne” is a real person, but let’s hope she reconnected with her mother. Anything less, due to what the Church was teaching her to do, would be awful.

January 2, 2016
Former Pastor Ryan Bell Reflects on Life Without God, a Year After Coming Out
Next Post

January 2, 2016 To No One's Surprise, Donald Trump is Now Being Used in a Terrorist Recruitment Video
Browse Our Archives
What Are Your Thoughts?leave a comment