To No One’s Surprise, Donald Trump is Now Being Used in a Terrorist Recruitment Video January 2, 2016 Hemant Mehta

To No One’s Surprise, Donald Trump is Now Being Used in a Terrorist Recruitment Video

Yes, we know Hillary Clinton was wrong when she said in a debate that ISIS was using Donald Trump in propaganda videos. But her error was mostly one of timing.

We’re now learning that a Somalian Al-Qaeda affiliate known as Al-Shabaab is indeed using Trump’s comments about how Muslims need to be banned from entering the United States as a recruitment tool: 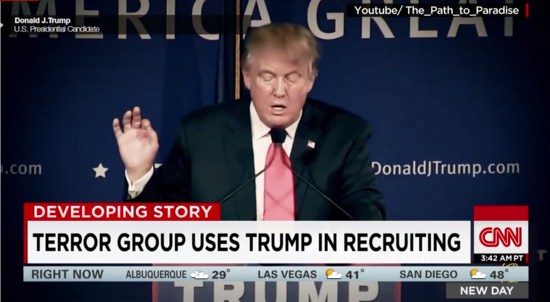 The video includes a clip of Trump calling for a “shutdown” of Muslims entering the United States.

“Donald J. Trump is calling for a total and complete shutdown of Muslims entering the United States until our country’s representatives can figure out what the [bleep] is going on,” Trump says in the clip. The group bleeps out Trump’s use of the word “hell.”

What’s surprising isn’t that this happened, but that it took this long. When you suggest that keeping out Muslims would improve U.S. security — forgetting that it’s not even possible to protect the borders based on ideology — of course the other side will use it to confirm the nasty things they’ve said about us. Trump’s comments fit in with the mindset that believes the U.S. is at war with Islam.

You can believe Islam is wrong and that more needs to be done to prevent radicalization of Muslims. I certainly do. But using religion as a limitation on who can enter this country goes against every principle we’re supposed to stand for. You can’t say we believe in religious freedom when that doesn’t apply to everyone equally. What did we expect when the leading Republican Presidential candidates says we should “take out” the families of terrorists, even when they did nothing wrong?

Trump’s ideas don’t prevent terrorists. They create even more of them.

The question now is whether the other Republican candidates — and their entire base — will repudiate what Trump said. Ted Cruz refused to do it last month, and I’m sure he’ll refuse to do it now. It’s a sad indictment for nearly half the electorate that a racist bigot is their top choice to lead the country — and that their other options don’t have the courage to take him on.