This is a guest post written by Nicolas Frame. Frame is an author of short fiction, nonfiction articles, and some poetry.

You’ve probably heard it before, and perhaps you’ve even uttered the phrase yourself. Atheists are fond of proclaiming their unwillingness to believe in some silly “2,000 year old book,” an argument which is meant to show how outdated the morals and societal codes taught in the Christian holy book are. The New Testament is certainly outdated and its rules have no business in the 21st century, but atheists are still wrong to use the phrase “2,000-year-old book” to dismiss the Bible. 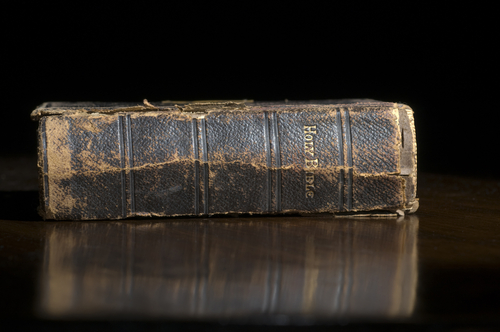 It is believed by most biblical scholars that Jesus was likely born around 4 BCE and died around the year 30 CE. From our present year, 2015, you can perhaps already see the concern with saying “2,000-year-old book” in reference to the Christian New Testament.

Two thousand years prior to this year would land us square in the middle of Jesus’ life, before he even began preaching as the “Son of God.” Is it likely that a book detailing Jesus’ many parables, miracles, divinity, and death would be circulating before he himself had even begun his prophetic apocalyptic crusade? No. In fact no such book would have been circulating, or ever did so, even immediately following his death in 30 CE.

Paul’s letters, or epistles, were written around 50 CE. The first New Testament Gospel, written by “Mark” (though the actual authors of the Gospels are anonymous and unknown), is believed to have originated between 65 – 80 CE. Matthew and Luke’s Gospels followed around 80 – 100 CE. The Gospel of John was the last to be written, between 90 – 120 CE.

So what’s the big deal, you might be asking. So what if “technically” it’s a 1,950-year-old book instead of a 2,000-year-old book? We still have the same problems! Therein lies the rub. While the Gospels were only written 35 to 90 years after the death of Jesus (only, ha!), the actual oldest surviving copies of these texts date to around the mid-2nd century onwards. In fact, the absolute oldest scrap of Christian writing that has been recovered to date is a fragment of the Gospel of John, written around 125 CE. To be clear, this is indeed a “scrap” which is barely as big as a credit card, with text on the front and back. This leaves us with bits and pieces of copies of the originals.

Why does that matter? At that time every text that was to be copied had to be tediously done so by scribes, letter by letter, word by word. This reproduction process resulted in countless variants including spelling mistakes, overlooked words (sometimes even whole passages), creative additions, and theologically inclined editing. So the surviving copies that we have, because we don’t have the originals, were the result of a century or more of handwritten copying. It has been argued that because we are left with copies of copies of copies, filled with errors, separated by so much time from the originals, that the true “original” versions intended by the authors can never be known. For the sake of argument, however, let us assume that the oldest copies we have, from around 150 CE or later, are essentially true to the originals.

So now we have a 1,865-year-old book instead of a 2,000-year-old one? Not quite. Although these writings were produced early on, then copied for years, they were not actually originally meant to be or distributed as a set of canonical scripture. Indeed, the New Testament is comprised of 27 books written by about 16 authors who had intended to address specific audiences at the time rather than create a collection that would serve as some timeless how-to guide.

When did these separate Gospels, individual letters, and additional books actually get drawn together into one distinct “New Testament”?

It seems that early Christians, at least those who were literate, may have recognized the bulk of the texts of what are today called the New Testament perhaps in the mid-2nd or early-3rd century. However debate over certain “books” like Revelation meant a complete canon, as we know it today, was not achieved until after this. There also does not exist any complete “book” from this period showing all of the Gospels and letters and additional chapters as one. The oldest complete New Testament manuscript we have wasn’t written until the mid-4th century, the Codex Sinaiticus. That’s roughly more than 300 years after the death of Jesus and original Gospel writings!

We are now more accurately talking about a book that is about 1,665 years old. Further still, this Codex Sinaiticus does not represent the final version of the Bible as we now know it. There are about 5,700 surviving manuscripts of the New Testament. These “manuscripts” range from the tiny credit card-sized fragment from the Gospel of John to entire copies of the New Testament. Of these manuscripts, the vast majority, something like 90% or more, come from the Middle Ages, generally from the 9th century or later. The revered King James Version of the Bible wasn’t produced until the early 17th century. The New International Version came about in the 1970s, or late 20th century, with its most recent update in 2011.

So what’s the point of all this? Who cares if we say the New Testament is 2,000 or 1,600 or 400 years old? You should care. Because by flippantly saying “I don’t believe in some 2,000-year-old mythological book,” you immediately grant Christians (who you may be debating with) a falsely earned upper hand and you lose the opportunity to educate them. If you incorrectly grant that the New Testament is 2,000 years old, then you’re admitting that the book was written and compiled within Jesus’ lifetime or immediately thereafter. In reality, none of the writers of the Gospels knew Jesus personally or were first-hand witnesses to the miracles claimed in their texts.

Some Christians may be well aware of the decades between the life of Jesus and the first written tales about it. Many, however, are likely unaware that in addition to the 35 to 90 year gap between life and biography we also have a massive gap between the original texts and the oldest copies of such. Even these copies that we have are incomplete fragments and it is not until centuries after the first writings about Jesus that we actually have complete versions (they are “versions” because they often disagree with one another and even with other copies of the “same” text). Even still, it is not until over 300 years later that we have a complete New Testament and nearly a thousand years later that we see a more “accurate” production of the Bible. These 9th century and later copies, while generally having less variations amongst each other, show stark differences when compared to the earliest manuscripts.

That’s why the next time you feel inclined to tell a Christian just how much you disagree with their holy book, don’t say it’s 2,000 years old. At the very least, say it’s a 1,600-year-old book, referring to the mid-4th century when the complete canon was officially adopted. If they have a look of puzzlement on their face, this is a great opportunity to share with them the long and dubious process by which their “divinely inspired” text was created.