Toledo Mayoral Candidate Who Speaks in Tongues Says at Debate That She Knows She Will Win October 30, 2015 Hemant Mehta

Opal Covey, the self-styled “prophetess” running for mayor in Toledo, Ohio, took part in a debate against the six other candidates on Wednesday night, and she didn’t disappoint. (Unless, you know, you live in Toledo, in which case you should be horrified.) 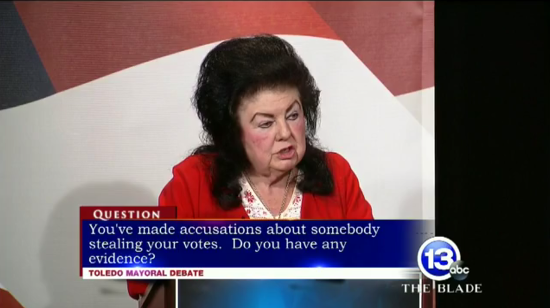 Perhaps the best exchange starts at the 4:23 mark of the video above. Covey was asked what plans she had for the city besides building amusement parks.

Her response? She didn’t have any. She said that once she gets the amusement parks going, it’ll lift the city out of its economic hole and everyone will be thanking her and kissing her feet.

At 14:00, a moderator asks Covey how much the amusement parks will cost and who she’s talking to about building them. She responded that it would be entirely privately funded and she’s already started talking to builders because she knows she’s going to win the race.

Her economic plan makes as much sense as the GOP President candidates who think lowering taxes and cutting nothing will somehow balance the budget.

For her closing statement, Covey asked the board of elections not to tamper with her votes. Because she only lost in the previous election, she claims, due to voter fraud. In Part One of the debate, when she was asked for evidence of this fraud, she said she saw it with her own eyes.

It’s a little strange to make that request though, since she knows she’s going to win the race. If she were right, no board of elections could stand in her way.

Ain’t democracy grand? Just about anyone can run for office. Even people who shouldn’t be elected dogcatchers.

The election takes place on Tuesday.

(Thanks to Tara for the link)

October 30, 2015 Members of Congress Are Defending the Praying Football Coach, but Here's a Terrific Response
Browse Our Archives
What Are Your Thoughts?leave a comment