Despite slamming Planned Parenthood for those videos and saying “there’s nothing that can’t be done without fetal tissue,” turns out Carson actually used that tissue in his own research published in 1992: 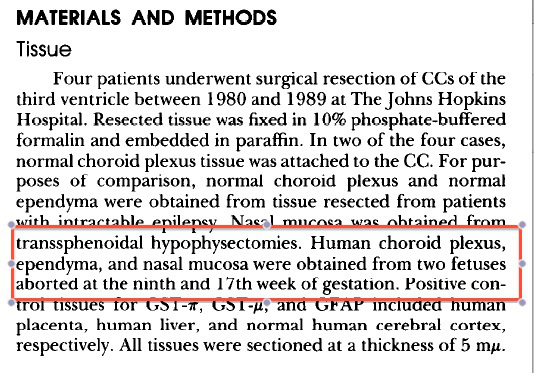 Perhaps Dr. Carson feels that only his work delivered the goods and all other researchers have produced inconsequential work, an Ebola vaccine clearly not of merit by Carson’s logic.

Could he think his own research was useless? However, if it was non contributory to the field why was it published?

As a neurosurgeon Dr. Ben Carson knows full well that fetal tissue is essential for medical research. His discipline would have a hard time being were it is today without that kind of work. What is even more egregious than dismissing the multitude of researchers whose work allowed him to become a neurosurgeon is the hypocrisy of actually having done that research himself while spouting off about its supposed worthlessness.

Carson attempted to explain himself yesterday during a campaign stop, saying it was okay when he used fetal tissue then because reasons.

There was no contradiction between this science and Carson’s pro-life views, he said. “My primary responsibility in that research was when I operated on people and obtained the tissue,” said Carson, who noted that he has not used fetal tissue samples since then. “This has everything to do with how it’s acquired. If you’re killing babies and taking the tissue, that’s a very different thing than taking a dead specimen and keeping a record of it.”

Carson will be thrilled to learn, then, that Planned Parenthood doesn’t kill babies. Or toddlers, for that matter. They donate tissue that would otherwise be discarded during perfectly legal abortions.

If only 1992 Ben Carson were running in this election. That guy seems *way* more reasonable than everyone else in the clown car.