Ray Comfort: Josh Duggar Wasn’t Really a Christian When He Molested Those Girls May 25, 2015 Hemant Mehta

Ray Comfort: Josh Duggar Wasn’t Really a Christian When He Molested Those Girls

***Update***: Turns out Josh Duggar was seven years old when he accepted Christ. Your move, Comfort…

Besides the awful acts themselves, I think what bothers me the most about this whole Josh Duggar story is how other Christian conservatives are just jumping to his defense.

Mike Huckabee called Duggar’s molesting of five girls “regrettable,” adding that nobody’s perfect and that Duggar should be forgiven since he “confessed his sins.” (Take a wild guess how Huckabee would react if, say, we found out President Obama did something similar when he was younger.)

That’s pretty bad. But Ray Comfort‘s defense of Duggar will leave you speechless: 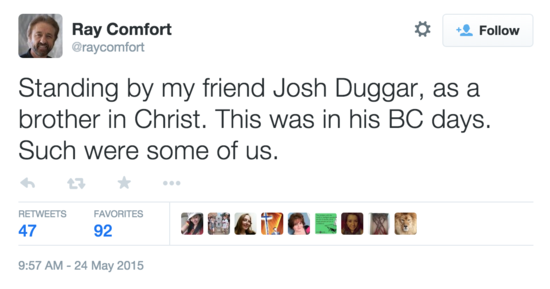 Standing by my friend Josh Duggar, as a brother in Christ. This was in his BC days. Such were some of us.

In case that’s gibberish to you, Comfort is saying Duggar molested his sisters before he was really Christian (“Before Christ”)… so what else would you expect?

It forced you to realize this is how some Christians see atheists. Since atheists don’t fear God, of course they’re capable of inappropriately touching children.

Bear in mind that Josh Duggar was brought up in a family that’s known primarily for how seriously they interpret their faith. It’s not like Josh Duggar was molesting kids only until someone told him about Jesus, at which point he said “No way! I’m *not* supposed to touch little girls’ vaginas?”

Creationist Eric Hovind took a similar approach, saying Duggar should be forgiven. His defense of Duggar, however, somehow included evolution:

Who knew: If evolution is true, then molesting kids is totally okay!

If this is the sort of morality Christians have — where the only thing preventing them from stealing or raping or committing any number of crimes is their fear of God — it tells you how fucked up their worldview is.

The rest of us are moral because it’s the right thing to do.

Eric Hovind is moral because he doesn’t understand how science works.

(Thanks to everyone for the links)