I’m the Student Who Spoke About My Jehovah’s Witness Past on YouTube May 25, 2015 Hemant Mehta

My name is Brie. I’m 18 and a senior at Lincoln High School in Manitowoc, Wisconsin. I graduate next week. And until I spoke about my religious history in class, in a video you might have seen online, I’d never shared that information publicly. My classmates were shocked that I was ever a Jehovah’s Witness. 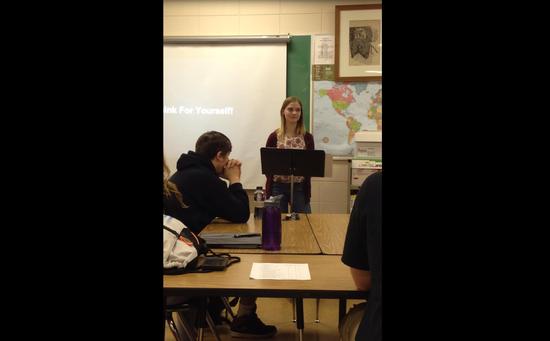 My mother was raised in the JW faith. My father was not, but he joined when I was born. And I was the perfect little Jehovah’s Witness girl, baptized at age 12 and attending congregation meetings every Tuesday, Thursday, and Sunday. (Recently it has been reduced to only two meetings a week.) Saturdays were my day to go out in field service (knocking on doors), though I did that even more during the summer. setting a goal for myself of 40 hours a week.

There were always small things about the religion that didn’t make sense to me at a young age, questions I couldn’t get straight answers for: How will there be room on Earth for all of the Jehovah’s Witnesses that ever lived? Where did all the animals on Earth come from if evolution isn’t true (since we know they didn’t fit on one ark)?

There were four big problems that really made me question my faith.

The first was teaching it to others. The Our Kingdom Ministry pamphlets my family received every month offered suggestions for how to present the literature in field service and I was great at reciting the presentation… exactly as written. I couldn’t ad-lib, because I didn’t feel like I knew enough about the religion to answer tough questions. If someone took the literature, you were supposed to take down their address and return later to encourage them to study the Bible with us. I would never check back because I worried about what they might ask me. In the classroom, I’m always the student who wants everything explained in detail, because I don’t like talking about something unless I truly understand it. But unlike my teachers, the Church elders refused to answer my questions.

I know why I felt that way now that I’m a bit older: Our answers were shallow and scripted. Even if devout followers wanted something more in-depth, we wouldn’t receive it because we were told not to question the teachings. (On top of that, it’s forbidden to look elsewhere for answers.) While there are websites dedicated to exposing the Jehovah’s Witnesses, we were told the people on those sites were being used by Satan to ruin our faith. All of the information out there was just brushed aside by active Witnesses as lies.

The second thing that made me question the religion was its stance on higher education. I have always done well in my classes, but Jehovah’s Witnesses frown upon people pursuing higher education. The reasoning, we’re told, is that life on Earth is temporary so we should be dedicated to Jehovah while we’re here. Any time spent pursuing “worldly” things is wasted and there would be plenty of time to learn in Paradise. But I didn’t want to serve tables the rest of my life. Education meant a lot more to me than they wanted it to.

Then there was the isolation from my father. He was Disfellowshipped by the Church six years ago. Even though he was excommunicated, I never stopped talking to him. (Unlike the God I was taught to worship, I had unconditional love for him.) But for years, that made me feel really guilty. I felt bad for loving my father! Members of the Church told me that by isolating him, he would be motivated to come back… but that’s not a chance I wanted to take. I knew he wasn’t going to return to the faith and I wasn’t ready to cut all ties with him. Plus, if he had given up his chance to go to Paradise, I wanted to make sure my limited time on Earth was spent with him.

The final straw came during in 9th grade when one of my friends and I went to the beach. I had been texting a boy from another JW congregation and sent him a picture of us on the beach… which meant we were in bikinis. Unfortunately, his mother went through his phone and came across our “horrible” photo. It led to Church elders coming over to my house to counsel me.

After that, I was done. I no longer wanted to identify as a Jehovah’s Witness.

I’m actually not Disfellowshipped yet. But I know it’s coming because of my speech (I’m sure this post won’t help, either). Saying anything against the religion is considered apostasy and I know I’ll have to deal with the aftermath of my speaking out sooner or later. I just hope it doesn’t happen before my graduation next week.

I love my family and want them to be there when I cross the stage — but if religion gets in the way, that may not happen. I want them to be proud of my one last time before they cut me out of their lives. They will take this speech very personally and feel that I am speaking out against them and the other members of this religion. To be clear, I don’t hate Jehovah’s Witnesses. My frustration is with the Organization. They’ve destroyed families and have many secrets. While most members, including the ones in my family, are kind people who believe they’re simply doing God’s Will, I think they’re victims, just as I was. Maybe they’ll realize that one day. Until that happens, though, I know my family members will excommunicate me in order to “save” themselves (and, in their eyes, me).

I don’t know how anyone can prepare for that. It’s not something I’m looking forward to. It’s going to hurt. Bad.

I’m not an atheist, by the way, but I’m not exactly a believer either. My views on that are still developing. For now, I think there’s something else out there even if I’m not sure that affects me.

Either way, I’m pretty sure that Higher Power, whatever it is, doesn’t give a damn about whether or not I’m wearing a swimsuit.

That brings me to what happened in my public speaking class.

My teacher, Mr. Hansen, told us to write a persuasive speech. He pointed out that speeches are much more persuasive when you’re using something you value to drive your ideas. It made me think about what I value in life and what my class needed to know about.

My faith has been a part of me my entire life. When my relatives found out my mother belonged to some ex-Jehovah’s Witnesses support groups, they stopped speaking to her. So that idea of love being conditional seemed very relevant to me. I told my mom that’s what I wanted to talk about in class and she loved it. She even told her support groups about it, and some of the other members volunteered to share their stories (which my mom could attest to) with me for my speech.

I warned Mr. Hansen that I might go over time during my presentation, but I really didn’t want to cut anything out. I didn’t want to jeopardize the message or the stories those ex-JWs had shared with me.

The only reason I recorded the speech was so I could share it with my mother and the women I interviewed. I figured only a few people would see it so I just asked one of my classmates to record it on my phone. When I was done, the class was quiet and one girl told me it was beautiful. I felt like the message had come through.

My mother and her friends were also moved by the speech and wanted to share it with some friends, so I made a YouTube account and uploaded the video.

That’s why I was shocked that more than 1,000 people had seen it within a few hours. I don’t even know how to comprehend the fact that it’s now at 350,000 views. I can’t believe people actually care about what I have to say, but I’m glad the speech resonated with them.

In case you’re wondering, I don’t know what grade I got on my speech. But if it’s not an “A,” I might show Mr. Hansen the YouTube numbers…

I’ve been shocked by the response for a couple of reasons. One is that people are sending messages at all. I didn’t expect that. The other is that they’re overwhelmingly more positive and supportive than negative. I know how cruel the Internet can be (especially to young women) but thousands of people have told me they’re proud of me and support my cause. I’m amazed and still in disbelief… given that it’s only been a couple of days since a close friend of mine told me I’m all over Reddit.

I didn’t even know what Reddit was, but she told me, “Brie, that’s where things go viral.”

My mother is very proud of me. When she saw how big this got, she asked me if I would have posted the video knowing it would explode like this. I told I would have. If I’m going to be Disfellowshipped eventually, might as well speak my mind and try to make a difference. I’m also a little nervous, though, because I fear my relatives will find out… and the result will be messy.

Until that happens, I’m glad I did this.

Brie will be attending Carroll University this fall to pursue a degree in physician assistant studies.

May 25, 2015
Ray Comfort: Josh Duggar Wasn't Really a Christian When He Molested Those Girls
Next Post

May 25, 2015 Friendly Atheist Podcast Episode 56: Lloyd Evans, Jehovah's Witnesses Watchdog
Browse Our Archives
What Are Your Thoughts?leave a comment