Six and a Half Reasons Why the Bible Is Not Divinely Inspired February 13, 2015 Terry Firma

What would it take for me to consider converting to Christianity? Simple: Incontrovertible proof of God.

A lot of Christians are fond of saying that all the proof we need is right there in the Bible, but I’ve read the so-called Good Book and I see zero evidence of divinity. In fact, reading the Bible only served to convince me further that Christianity is a house of cards, with a Biblical foundation that is full of mystifying holes and fissures.

Matt, a former evangelical Christian who now writes at Southern Skeptic, recently asked what we would expect to find in a book that was either written by God, or divinely inspired. He’s come up with seven (OK, six and a half) excellent answers.

1. The Bible would be well-organized.

But it isn’t. It’s a hopeless mess. Writes Matt:

2. It would be more specific. 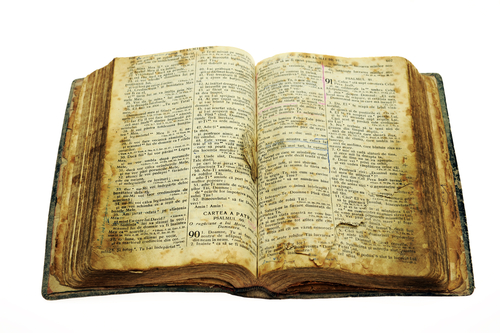 Imagine how convenient it would be if one of the books of the Bible was called “Morality” and it had a different chapter for each area of morality. What if there were a chapter on murder that clearly describes all the various scenarios where killing is permitted (war, execution, self-defense, etc.)? … [W]hen it comes to good, practical advice that we can apply to our daily lives, the Bible falls short.

3. It would be easy to understand.

To some extent, this goes back to 1 and 2. The Bible is cryptic and open to roughly 41,000 interpretations — that we know of.

If God wants his message to be understood by everyone, then even simple-minded people should be able to understand his book. As it is, experts in theology have been debating the exact meaning of many passages for centuries.

4. It would be perfectly consistent.

No dice on that score either.

What does an all-powerful writer need? An all-powerful editor, apparently. When God spoke through his ghost writers, one of his angels should have spoken up and said, “Hey, you might want to fix some of those contradictions.” I mean, come on, there are hundreds of them.

5. It would have specific, verifiable prophecies.

It would name, with specificity, certain crucial events that happened hundreds or thousands of years after the Bible was written. Maybe the Crusades, or the atomic bomb, or the moon landings. A clear mention of world-changing discoveries and technologies would be nice — the printing press, say, or the fact that the Earth revolves around the Sun, or flying machines, or penicillin. Such predictions would go a long way to establishing divine origin.

Instead, Biblical prophecies are feeble in the extreme.

[Y]ou would expect the prophecies to be specific and not subject to interpretation. “Wars and rumors of wars” is not a good prophecy.

How about something like, “On the day after the celebration of our Lord’s birth, a great wave will rise from the ocean of India and swallow 230,000 lives.” Here I’m referring to the 2004 Indian Ocean earthquake and tsunami. In one simple sentence I mention the exact day, the nature of the disaster, and the number of people who die. A prophecy like this could not be fulfilled by people trying to make the prophecy come true, and it is too specific to be a lucky guess.

6. It would contain knowledge that humans couldn’t have had.

This is the most powerful argument of all to me. It’s almost as if everything in the Bible were written by Iron Age humans, with an Iron Age understanding of how the world works. Go figure.

Imagine if there were a Bible verse that said, “For the pieces that make up our Lord’s creation behave as both particles and waves, existing everywhere and nowhere.” It wouldn’t have made sense to people at the time, but millions of people today would recognize it as a description of quantum mechanics. Imagine how many fence-sitters would convert to Christianity after hearing about this amazing piece of scientific knowledge in an ancient religious book. …

“Thou shalt boil thy water lest the invisible creatures therein bring sickness upon your body.” Invisible creatures living in the water and making people sick? This would have sounded very odd to people in ancient times. But you know what? Not only would it impress modern day readers, it would have saved millions of lives. Why oh why didn’t Jesus warn people about germs?

I would add that, oddly enough, everything described in the Bible takes place in the geographical area that its authors knew (or knew about), which happens to be a comparatively tiny patch of Earth. Though God made Europe and the Americas and Asia, all of which teemed with the life he created, he forget to mention any of it to his stenographers. 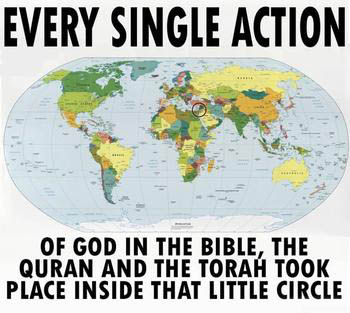 7. It would have beautiful, heart-rending poetry and stories.

Not as convincing as the others, I think. Beauty, being in the eye of the beholder, is neither objectively present nor measurable. Millions of people find the Scriptures exquisitely written. In the Netherlands, a well-known secular novelist once told me that he liked to read the Bible to “cleanse his literary palate” with its beauty. OK then — to each his own. But I do understand where Matt is coming from:

In Judges 19:22-30, an old man takes in a travelling Levite. Later, a group of men who want to rape the traveler come to the old man’s house and beat on his door. The old man offers them his daughter and concubine instead, so the men take the concubine and rape her all night. The next morning the old man finds the concubine (who is still alive), chops her into twelve pieces, and sends them to the twelve tribes of Israel. The story ends with the words, “consider of it, take advice, and speak your minds.”

What are we supposed to make of this horrible story? What’s the point?

In short, if God wanted to make his presence conclusively known through scripture, he could have — and should have — done a lot better than the Bible.

The good news is, it’s not too late. If the Almighty really wants to get his message across with incontestable clarity, I hope he’ll entertain a suggestion.

He could easily make a hundred towering, 1,000-feet-tall, black granite slabs appear overnight in a hundred major cities across the world. The surface of each unique slab would be literally aglow with words from a magical, pre-Babel lingua franca that each of us can somehow read with absolute comprehension. The texts would enter our minds and be available for errorless instant recall whenever we wanted.

They would speak of morality and ethics in ways that, to our collective joy and relief, force an end to the fractious debates over gay rights, abortion, euthanasia, and a range of other divisive topics.

The 100 texts combined would constitute Bible 2.0, a perfect, ever-lasting, globally understood masterpiece created by the obvious Lord of the Universe.

Free will would survive. People would still be able to go against the advice of the Man Upstairs, but they’d finally be crystal-clear on what that advice is.

Almost all religious strife would stop. Many millions of lives would be saved.

Billions of hours uselessly spent debating theology can instead be dedicated to education, inventing things, building a better world.

In Bible 2.0, God could prophesize actual dangers in our future (tsunamis, quakes, massive crop failures, pandemics), and even give us the tools or knowledge to neutralize them. Additional millions would owe him their lives.

Should God desire worship, most would readily oblige. The appearance of Bible 2.0, clearly divine in origin, would make billions of converts in the space of a few days.

I wonder what he’s waiting for.

February 13, 2015
Are You an Atheist Politician? If You're British, It Will Help You, Says New Survey
Next Post