Are You an Atheist Politician? If You’re British, It Will Help You, Says New Survey February 13, 2015 Hemant Mehta

Are You an Atheist Politician? If You’re British, It Will Help You, Says New Survey

According to a survey released yesterday by YouGov, nearly a third of British adults don’t believe in a God. (Compare that to the 50% who are at least nominally Christian.) 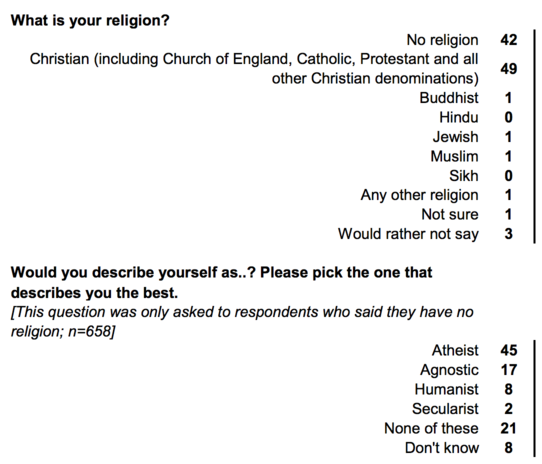 Even more interesting is when those respondents were asked what they thought about Deputy Prime Minister Nick Clegg and Labour Party leader Ed Miliband, both of whom are atheists. More Brits than not said they viewed the men more positively because of their godlessness.

(Obviously, that’s a far cry from the U.S., where a declaration of one’s atheism is essentially political suicide.)

“Political leaders would want to avoid polarizing opinion in that way, but again it’s evidence of a sort that people can express strongly anti-religious views and receive more applause than disapproval,” David Voas, professor of population studies at Essex University, told the Times.

“The mere fact that atheists are more comfortable than Christians in saying what they are is noteworthy. Certainly Americans would be astonished to hear that only 10 percent of British atheists feel uncomfortable telling people their identity,” he added.

Almost one in three under the age of 24 declare themselves to be atheists, compared with only one in 10 people over the age of 60.

These results fall in line with previous surveys done by other groups in the UK. In November, we learned that “More than half of Britons believe that religion does more harm than good.” And last June, YouGov found that 38% of Brits ages 18-24 were atheists.

Even crazier? I’m sure there are British people who think these numbers are ridiculously low.