A couple of weeks ago, three 14-year-old boys nearly drowned in Missouri’s Lake Sainte Louise. One of them, John Smith (below), had no pulse when he arrived at a local hospital and his prognosis wasn’t good. When Dr. Kent Sutterer told John’s mother she should prepare to say goodbye, she began praying… and then something incredible happened: 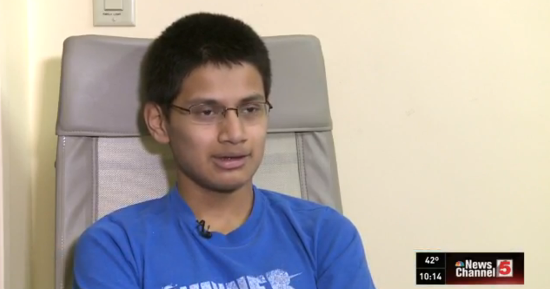 But when Joyce Smith came in and saw what was going on, her reaction was to start praying loudly.

Of course, the word “miracle” is being tossed around:

“I know it doesn’t fit into our neat little box of today,” says John’s father, Brian Smith of this miracle, “but again, you can’t refute the clinical evidence.“

I understand the father suggesting it’s a miracle, but it’s never good when a doctor agrees…

As grateful as I am that John is getting better, it’s worth pointing out that there were some possible natural explanations for his recovery.

Like the paramedics working as quickly as they could:

He wasn’t breathing, and paramedics and doctors performed CPR on him for 43 minutes without regaining a pulse.

John was airlifted to SSM Cardinal Glennon Children’s Medical Center about two hours after the accident. Dr. Garrett says he knew within about the first 16 hours after John’s arrival that his body would physically survive the ordeal what he didn’t know was how much brain function he would have.

And there’s the practice for this kind of situation that took place the week before the accident:

… Lake St. Louis Fire and Emergency crews had just practiced ice rescues the week before they pulled John out.

And there’s the possibility that the ice cold water actually slowed his metabolism so much that it allowed him to survive a situation that might have otherwise killed him.

There may be inexplicable aspects of this case, but a lot of media outlets aren’t focusing on the natural explanations readily available to us. They’re jumping immediately to miracles. It does a disservice to readers and viewers not to be honest about what happened. John very likely could have died despite the prayers — and we never would’ve heard about them in that case. But John got better moments after the prayers started and suddenly everyone becomes a theologian.

And if God was really looking out for him, maybe he wouldn’t have let him nearly drown in the first place.

(Thanks to Erica for the link)

February 6, 2015
Pastor's Wife, a Homemaker, Says Moms Who Work Are Blasphemers and Sinners
Next Post

February 6, 2015Frozen Empowers Girls at Expense of Boys, Say Fox News Host & CEO of Christian Women's Group
Browse Our Archives
What Are Your Thoughts?leave a comment