On Wednesday’s Fox and Friends, host Steve Doocy interviewed Concerned Women for America’s CEO Penny Nance. If you’re not familiar with CWFA, it’s an anti-feminist conservative Christian women’s group designed to “protect and promote Biblical values among all citizens.” And in case you weren’t sure what that means, it’s pretty much forcing far-right Christian “values” on everyone — with a special emphasis on going after women’s rights (although LGBT people are popular targets as well). 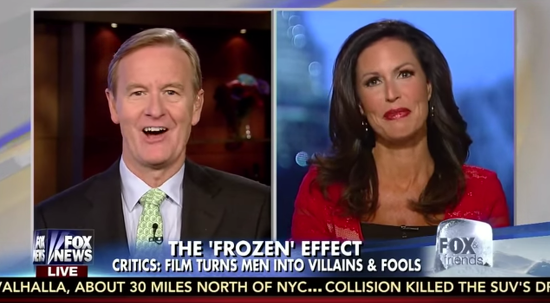 To give you an idea of what I’m talking about, the CEO and President’s bio declares…

Nance oversees CWA’s multi-issue agenda, which includes protecting and supporting the Biblical design of marriage; protecting the sanctity of human life; reforming public education by returning authority to parents and making accessible alternative forms of education; ending sexual exploitation by fighting all forms of pornography, obscenity, prostitution, and sex trafficking; defending religious liberty by supporting the God-given rights of individuals in the U.S. and other nations; endorsing national sovereignty through supervision of United Nation’s efforts and budget restraint embodying responsible spending; and supporting Israel and the Jewish people.

Nance’s job, though, isn’t just reminding the world that pornography is basically no better than sex trafficking (just another form of the same evil!). Part of it apparently includes worrying about which cartoons are destroying little boys’ futures. That might sound absurd, but she’s uncovered a truly terrifying example of Hollywood’s evil: Frozen.

No, she’s not arguing that parents, siblings, aunts, uncles, and moderate acquaintances having to listen to the same set of songs approximately five hundred and eighty-three thousand times is evidence of villainy… if she’d pursued the dark sorcery that made that happen, she would have come across as pretty reasonable to anyone who has contact with other human beings younger than, say, fifty.

Instead, Doocy and Nance’s objections were that the movie was “empowering girls by turning our men into fools and villains.” How? They never explicitly state how Frozen does this, but Doocy plays as his evidence two clips that include these troubling points:

After Doocy wondered what “message” these clips sent to boys, Nance revealed what she saw as the challenge this presents to good mothers.

… the question for us as moms when we bring our daughters to see Frozen or whatever the movie is, we often have our little boys sitting there, and is this message helpful? We want them to know they’re essential, we want to raise heroes, we want to raise real men that will stick in their families and be great dads and be great providers and great husbands.

Because it’s all well and good to have positive messages for girls, but, really, shouldn’t the film’s men be perfect (alongside those imperfect women)? I mean, what kind of message are you sending to boys if they don’t see men as perfect and women as intrinsically flawed? You’re perverting the natural order of the world, Disney!

Remember, this conversation is stemming from the realization that there is no perfect knight in shining armor to save the damsel in distress in Frozen; instead, the day is saved by a confederation of lovable clowns (male, female, human, reindeer, and snowman…). It may seem like a non-issue to you, but you’re missing the point: it’s okay when girls see imperfect, insecure, and otherwise flawed female leads, but if a boy sees those qualities in the male protagonist, it’s an attack on masculinity, society, and the family!

The Religious Right is pretty good at maintaining a baseless persecution complex. But when you have to try that hard to come up with examples of the persecution you face? Well, even Steve Doocy should be ashamed of himself for promoting such patently absurd whining.

February 6, 2015
Missouri Teen Who Nearly Drowned Isn't Alive Because of a Miracle
Next Post