Pastor Who Bragged About Punching a Kid in the Chest Apologizes (After Removing All Sermon Videos from Vimeo) January 12, 2015 Hemant Mehta

The other day, I posted about Pastor Eric Dammann of Bible Baptist Church in Hasbrouck Heights, New Jersey, bragging about how he once punched a bright child in the chest for not taking the Lord seriously enough: 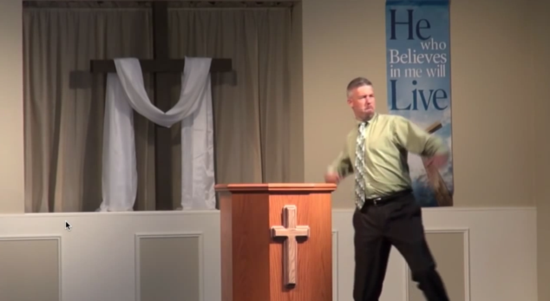 He ended the clip with: “There’s times that that might be needed.”

In the days since that video went viral, Dammann has been trying to do damage control.

He spoke with the Daily Mail:

In a brief statement he said: ‘I would like to say that I do not endorse child abuse or ever will. My actions were inexcusable.’

And then, he (or another staffer) began scrubbing the church’s Vimeo page of all sermon videos.

I’m not sure what that will accomplish. The Vimeo site was useful only in confirming the church and pastor’s names… unless there were other videos in which he said even worse things. Which I suppose is entirely possible given that he so casually spoke about beating up a kid.

For now, the church’s website and Facebook page are still up, though there’s very little information on either one.

My email to the pastor asking for a more detailed explanation of his abuse-bragging has gone unanswered. 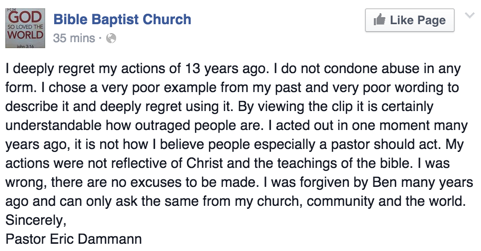 I deeply regret my actions of 13 years ago. I do not condone abuse in any form. I chose a very poor example from my past and very poor wording to describe it and deeply regret using it. By viewing the clip it is certainly understandable how outraged people are. I acted out in one moment many years ago, it is not how I believe people especially a pastor should act. My actions were not reflective of Christ and the teachings of the bible. I was wrong, there are no excuses to be made. I was forgiven by Ben many years ago and can only ask the same from my church, community and the world.
Sincerely,
Pastor Eric Dammann

I appreciate that he regrets his actions, though I would love to hear Ben’s side of the story… It would also be good for Dammann to apologize to his church during his next sermon.

Either way, I still don’t know why he removed the sermon videos from Vimeo.

(via Christian Nightmares. Thanks to Tim for the link)

January 12, 2015
Stephen Fry Reminds Us That Mockery Need Not Be "First Rate" To Deserve Our Strongest Protection
Next Post

January 12, 2015 Turns Out the Married Pastor Who's Attracted To Men (but Not Gay) Has an Openly Gay Brother
Browse Our Archives
What Are Your Thoughts?leave a comment