A Somali-American pressure group is demanding pork-free products from local Minneapolis “food shelves” (akin to food banks for the poor).

Oddly enough, neither the word “Islam” nor “Muslim” shows up in this report from CBS News: 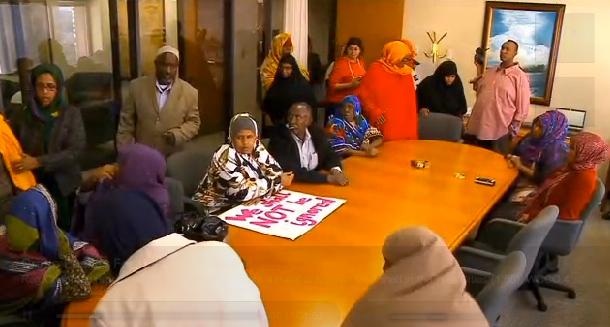 … many in the Somali-American community say finding a food shelf that caters to their religious dietary restrictions is almost impossible. “Some food shelves are trying to meet the need, but some of them already got canned beans that have already been mixed with pork — and there is a literacy issue here,” said community activist Fartun Weli.

A group of first-generation Somali Americans says they need help in developing a food shelf that specializes in healthy foods that do not contain pork or pork byproducts.

With signs in hand, they marched to the Hennepin County commissioners’ office to ask Peter McLaughlin for help.

When you view the video, with its footage of protest signs that say things like “We shall NOT be ignored,” does it seem to you that these protesters are kindly “asking for help”? If they were asking for help, rather than dictating their demands for special religious freebies as if they were entitled to them, I’d be less irritated.

I dare say the same might be true for Mr. McLaughlin, a representative of the secular government, who doesn’t seem too thrilled about being called a violator of human rights — by religionists claiming special treatment, no less.

One is that the protesters, perhaps mindful of the old adage that beggars can’t be choosers, learn to content themselves with the plentiful food-shelf products that already do not contain pork. A more than decent selection of the foods on offer (all fruits, vegetables, breads, beef and chicken dishes, and desserts, for starters) is perfectly unaffected by pig cooties.

Not good enough (for whatever reason)? Fine. Then the other solution is that the Muslim community in the Twin Cities recognizes the apparent need for a separate halal food shelf, and provides just that using donations — that is, private money, without claiming a made-up entitlement of hundreds of thousands of dollars in government funds.

P.S.: I can’t help but wonder if some of these folks don’t have jobs — in retail, or in transportation, or in the hospitality industry, etc. — because they believe their religion forbids them to handle alcohol, or pepperoni pizza, or dogs.

September 25, 2014
Chicago's New Archbishop Blase Cupich Is Indeed a Mini-Pope Francis... but That's Not a Good Thing
Next Post

September 25, 2014 On Being An "Accommodatheist": A Response to Jerry Coyne
Browse Our Archives
What Are Your Thoughts?leave a comment