Vatican-watchers have their eyes on America as Pope Francis just appointed his most recent archbishop. The pontiff has chosen the Bishop of Spokane, Blase Cupich (pronounced “SOO-pitch”), to replace the aging (and reportedly ill) Cardinal Francis George.

Pundits are calling Archbishop-designate Cupich (below) a “moderate voice,” even trumpeting the decision as a decisive blow against conservative Catholic political positions. TIME‘s online coverage of Cupich’s appointment lauds him as a cleric cut from the same cloth as the well-liked pontiff: 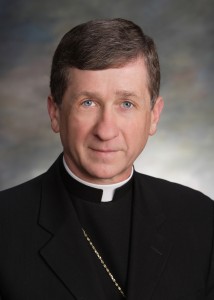 Francis himself has named three things that are needed for an effective bishop: closeness to the realities of the people, a simplicity of life, and a humble engagement with society… Blase Cupich apparently got the memo.

One might well question these categories, and how well either Francis or Cupich embody them. Certainly Cupich is known to echo the pontiff’s devotion to simple living and his stated rejection of economic inequality. As for engagement with society and closeness to human realities… well, that’s perhaps a different story.

Cupich’s secret is to deliver an unpopular message wrapped up in the language of conciliation, compassion, and respect for others. In this, he echoes Pope Francis’ fourth, unspoken category of pastoral effectiveness: media-savvy.

Cupich scolded the Catholic service providers who wanted to shut down hospitals and soup kitchens if the government made them provide contraceptives in their health care packages, calling those threats “unnecessary scare tactics and worse-case scenarios.” But that didn’t mean he accepted female employees’ right to have their reproductive health needs covered by their earned benefits. In fact, he called the HHS Mandate “a direct assault on the Church’s teaching mission.”

Maybe the ultimate example of this sleight-of-hand tactic is his pastoral letter on Referendum 74, Washington’s referendum on marriage equality, in which he bizarrely urged voters to reject the “redefinition of marriage” by spending much of the letter praising the compassion and conviction that motivates gay-marriage advocates. The result he desires, of course, is still the same: second-class status and ongoing stigma for same-sex partners.

And on it goes. He does a great job adopting Francis’ measured tone, but when you pay close attention to the message, what he delivers is the same Catholic missive we’ve heard many times over. Check out the homily where he drew a false equivalency between a child murdered at Newtown and a fetus growing in the body of a woman who did not consent to being pregnant:

The truth will win out and we have to believe that a nation whose collective heart can break and grieve for babies slaughtered in Newtown has the capacity and God’s grace to one day grieve for the babies killed in the womb.

Or another reflection on Referendum 74 in which he solidly emphasized rigid traditional gender roles as a crucial foundation for meaningful family life, the absence of which he considers a violation of children’s human rights.

He was at his absolute worst when discussing the impact of the priestly sex abuse scandals in an interview with the National Catholic Register:

Part of that is the way that we have the 24/7 news cycles, they’re always looking for things that are wrong with either individuals or institutions… We used to be more distant from that in terms of allowing us to be more indulgent of mistakes of people or individuals. We do need to make sure we have transparency and clear reporting when major things are wrong, but sometimes it can get to be very nitpicky and we look at every little foible and erode the confidence of people in their leadership and in institutions.

Child molestation is not something worthy of indulgence. The problem here is not that overheated news cycles have led reporters to unjustly magnify the Church’s foibles, creating an erosion of trust in the institution. The problem is that the Church concealed abusive priests from legal repercussions at the expense of abused children.

But apparently, in Cupich’s eyes, being raised by same-sex parents is a violation of children’s human rights, while if you balk at being molested by a known predator because the Church concealed his past abuses, you’re being “nitpicky.”

All in all, it’s hardly possible to imagine a more Francis-like archbishop. The key to Francis’ popularity, after all, has been to use pleasant sound-bites that sound compassionate and fair-minded — “Who am I to judge?” is a good example — while clinging tenaciously to positions that undermine social equality, strengthen shame and stigma around human sexuality, and keep women subservient, pregnant, and powerless.

So, is Chicago’s new archbishop a mini-Francis? Yes, and he’s no more “close to the realities of the people” than the man who appointed him.