This is a guest post written by Miri Mogilevsky. Miri is a graduate student in social work and the author of the blog Brute Reason, which covers psychology, mental health, and social justice from a secular perspective.

Polyamory — the practice of having multiple sexual/romantic relationships with the knowledge and consent of everyone involved — is currently going through that stage that all “alternative” lifestyle practices must go through: the one where journalists discover their existence and have a field day. 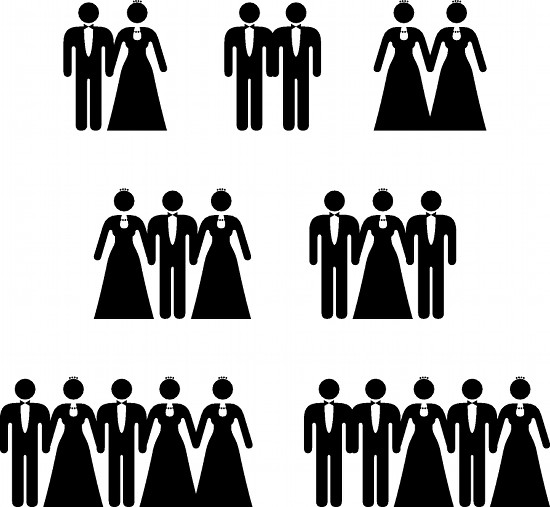 Luckily for them, more and more people are willing to openly talk about their open relationships as the stigma of being non-monogamous diminishes. Journalist Olga Khazan interviewed quite a few of them in this article for The Atlantic. While the article is well-researched, balanced, and accurate overall, it (probably unintentionally) repeats and propagates a few tropes about polyamory that aren’t always accurate.

Note that I said “not always”; tropes are tropes for a reason. There are plenty of people whose polyamorous lives resemble them, and I mean it when I say that there’s nothing wrong with that (as long as it’s all consensual!). But I think that the (presumably non-poly) audience these articles are aimed at might benefit from seeing a wider variety of poly experiences and opinions, so I wanted to add my own voice.

It’s right there in the title, “Multiple Lovers, Without Jealousy.” Although the article does later go more in-depth about the ways some poly couples experience and manage jealousy, the headline perpetuates the common myth that polyamory is for a special breed of human (or superhuman, perhaps) who just “doesn’t do” jealousy.

Some do, some don’t. For some poly folks, jealousy is a non-issue. For others, it’s an annoyance to be ignored as much as possible. For still others, it’s a normal, natural emotion to be worked through and shared with one’s partners. There are as many ways to deal with jealousy as there are to be polyamorous — and there are many.

The reason this matters is because framing jealousy as a thing poly people just don’t experience drastically reduces the number of people who think they could ever be poly. I’ve had lots of people say to me, “Oh, polyamory sounds cool, but can’t do it because I’d be jealous.” Of course, dealing with jealousy isn’t worth it for everyone, so I completely respect anyone’s decision to stick with monogamy because of that. But I think it’s important to let people know that you can experience jealousy — even strong and painful jealousy — and still find polyamory fulfilling and completely worthwhile.

2. Bisexual people try polyamory because it’s not fulfilling to only date a person of one gender.

Some do, yes. But this also ties into an unfortunate, harmful, and inaccurate myth about bisexual people: that they will inevitably cheat on you because they “need” to be with someone of another gender. Myths like these, in turn, contribute to prejudice and discrimination against bisexual people, who may face such hurtful attitudes both from the straight majority and from gays and lesbians.

For many bisexual people, the gender of their partner isn’t nearly as essential a factor as others seem to think it is. We may notice it, sure, but we don’t sit around thinking, “I’m very glad that I’m dating both Suzie and Tom because Suzie is a girl and Tom is a boy!” It’s just like you can be attracted to blondes, brunettes, and redheads, without necessarily feeling stifled and unfulfilled if you’re only dating brunettes at a given point in time.

Poly folks themselves sometimes repeat this trope to counter the assumption that polyamory is just about wild, carefree, casual sex with as many people as possible. However, the fact that that assumption is usually made with a negative connotation by monogamous people doesn’t mean there’s anything wrong with doing non-monogamy that way.

There’s also nothing wrong with doing something in between — meaningful, often-close partnerships with people that don’t necessarily involve long-term commitment, cohabitation, or marriage. Some people call this “solo polyamory,” because the emphasis is not on any central couple(s), but on the individual. People who practice solo polyamory tend to value independence and often reject the idea of labeling their partners “boyfriend,” “girlfriend,” or other terms that suggest commitment.

But that doesn’t mean that solo poly relationships are “casual” or “meaningless,” either. Some experience them as very close friendships that also happen to involve sex. Others have romantic feelings towards their partners, but aren’t interested in the “relationship escalator” of constantly increasing intimacy and commitment.

Many people who practice solo polyamory find that their experiences and issues aren’t much-discussed in the poly community, which is focused more on couples and the challenges and triumphs that they may experience within open relationships. This could be a reflection of the fact that many people come to polyamory after having been monogamous for their entire adult lives up until then, and the couple unit can seem more comfortable and easier to manage. For some, it is, and it’s completely worth it. For others, that aspect of traditional relationships just doesn’t appeal.

Think of this as the general case of the bisexuality trope I mentioned earlier. Many people think that polyamory happens when a monogamous couple discovers that they can’t provide something for each other (kinky sex, frequent-enough sex, being of a certain gender) and realizes that they need to find other partners to provide for the missing needs.

As with the other tropes, this is certainly true sometimes, and more power to people who are able to maintain a healthy and happy relationship rather than breaking up because they decided to try polyamory. However, for other poly people, it’s less about getting particular needs met than about… well, we fall for multiple people. I can’t necessarily point to certain things that certain partners of mine provide that others can’t. I didn’t start seeing them because they met a previously unmet need. I just met them and we clicked.

Poly people sometimes say, “You can’t fix a broken relationship by adding more people.” I’ve found this to be true, and that’s a danger when you believe that other partners can provide what your existing partner(s) cannot. Some people find, much to their disappointment, that it’s not just that they wanted kinky sex or dates that involve skydiving — they wanted those things with that particular partner, and if they can’t have it, they can’t be happy in the relationship.

Overall, Khazan’s article is a comprehensive and interesting introduction to the history, culture, and practice of polyamory. My only serious quarrel with it is the inclusion of some dubious evolutionary psychology. She cites a researcher and uncritically claims that “most people aren’t biologically predisposed to share their lovers,” because, you know, it’s not like the cavemen did it.

What I’ve found from studying psychology in general is that evolutionary psychology in particular is rarely good science. Its hypotheses are rarely falsifiable, and it allows any researcher with sufficient creativity to invent a plausible-sounding explanation for just about any phenomenon in human behavior. Many studies from evolutionary psychologists merely show that a phenomenon exists, and then assume that that phenomenon has an evolutionary origin. In fact, most of our behavior is probably caused by an interplay of genetics, socialization, culture, and other factors that are too complex to distill into a statement like “most people aren’t biologically predisposed to share their lovers.”

However, most polyamorous people probably don’t care very much whether or not our relationships go against our “hard-wiring.” We enjoy them, they’re fulfilling, and we wouldn’t have it any other way.

July 24, 2014
No, an Ohio State Class Did Not Teach That Christians Are Dumber Than Atheists
Next Post