No, an Ohio State Class Did Not Teach That Christians Are Dumber Than Atheists July 24, 2014 Hemant Mehta

No, an Ohio State Class Did Not Teach That Christians Are Dumber Than Atheists

According to an article on the conservative site Campus Reform, a recent online quiz for a Psychology 1100 class at The Ohio State University asked students:

Correct answer? Aine (with a higher IQ) is an atheist, while Theo is a Christian. 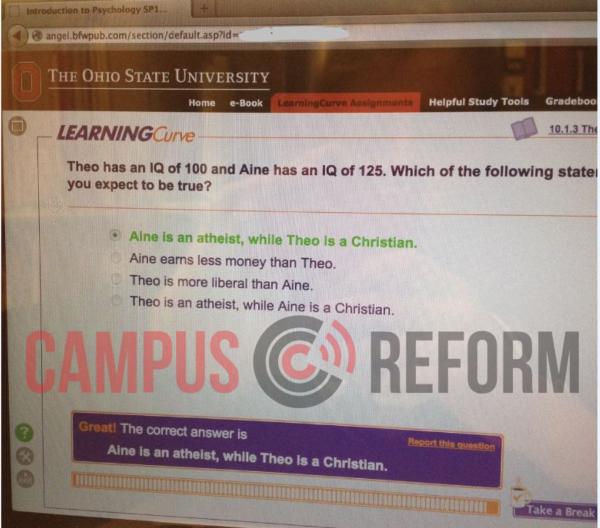 Assuming nothing here is doctored, it just strikes me as a horribly written, too-simplified-to-be-useful question.

It’s true that a research paper published last fall said there’s a negative correlation between religiosity and IQ — the higher your IQ, the less religious you were — but even the researchers didn’t jump to the conclusion that the quiz question suggests:

But [psychologist Miron] Zuckerman is careful to point out that his work — known as a “meta-study” because it examines a range of other studies — does not mean only dumb people believe in God.

Rather, he said, it shows only that more intelligent people may have less need for religion.

“It is truly the wrong message to take from here that if I believe in God I must be stupid,” he said. “I would not want to bet any money on that because I would have a very good chance of losing a lot of money.”

“We say it is possible that having a high level of intelligence provides similar functions to what religion provides” for people who adhere to a religion, Zuckerman said.

It’s also true that countries that are more atheistic tend to have higher average IQs. However, averages say very little about individuals and the quiz question simplifies the data so much that it becomes flat-out weird. (What do we really know about Theo and Aine? Next to nothing.)

Kaitlyn Schallhorn at Campus Reform says that the quiz may have been created by a teaching assistant, not the professor, and an unnamed employee in the psychology department told her students concerned about their grade could talk to someone in the department.

Here’s a simpler solution: Toss the question and have a discussion in class about how to properly interpret studies. There’s no evidence of anything nefarious going on, and it’s telling that Schallhorn never tells us what the textbook or professor actually said about the subject in question.

“Colleges will tolerate pretty much any religion other than Christianity,” the OSU student [who took the quiz] said. “If colleges really want to give everyone a fair shot, they should stay away from making comments about any religion.”

That has absolutely nothing to do with it. This isn’t about colleges being “liberal” or against religion. But no one tell University of North Carolina professor Dr. Mike Adams. He’s too busy auditioning for Fox News:

“So would it be permissible to force blacks to take a class teaching that blacks would have a lower IQ than white people?” he said in an interview with Campus Reform.

(How did this guy become a professor…?)

Look, a psychology or sociology class is a great place to talk about the benefits and drawbacks of religion. If there’s evidence of religion hurting us as a society, then we should talk about it. A college classroom is the perfect environment in which to challenge your beliefs, whatever they are. And if there’s reason to believe skin color affects your IQ, yes, it should be discussed, even in a required class. (Spoiler: Skin color doesn’t affect your IQ. But many other factors, like access to a quality education, do.)

None of that excuses the bad quiz question. But it’s not worth the big fuss. It’s a one-off question that should be simple to correct, so let the professor correct it (or get rid of it altogether). There’s no reason to jump to the conclusion that it’s somehow evidence of anti-Christian discrimination.

July 24, 2014 Debunking Four Myths About Polyamory
Browse Our Archives
What Are Your Thoughts?leave a comment