Why Are Conservatives Defending the Woman Who Posted a Picture of Herself Holding a Gun and a Bible? July 9, 2014 Hemant Mehta

Why Are Conservatives Defending the Woman Who Posted a Picture of Herself Holding a Gun and a Bible?

By now, you’ve inevitably seen the picture of a Christian woman holding a gun in one hand and a Bible the other, while standing in front of an American flag. Because that somehow relates to Hobby Lobby: 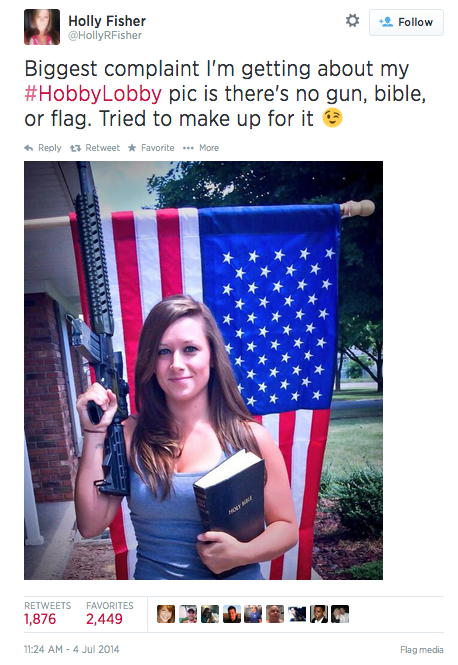 The picture went viral after it was juxtaposed with a similar image of terrorist Reem Saleh Al-Riyashi (often including the phrase: “Explain the difference”): 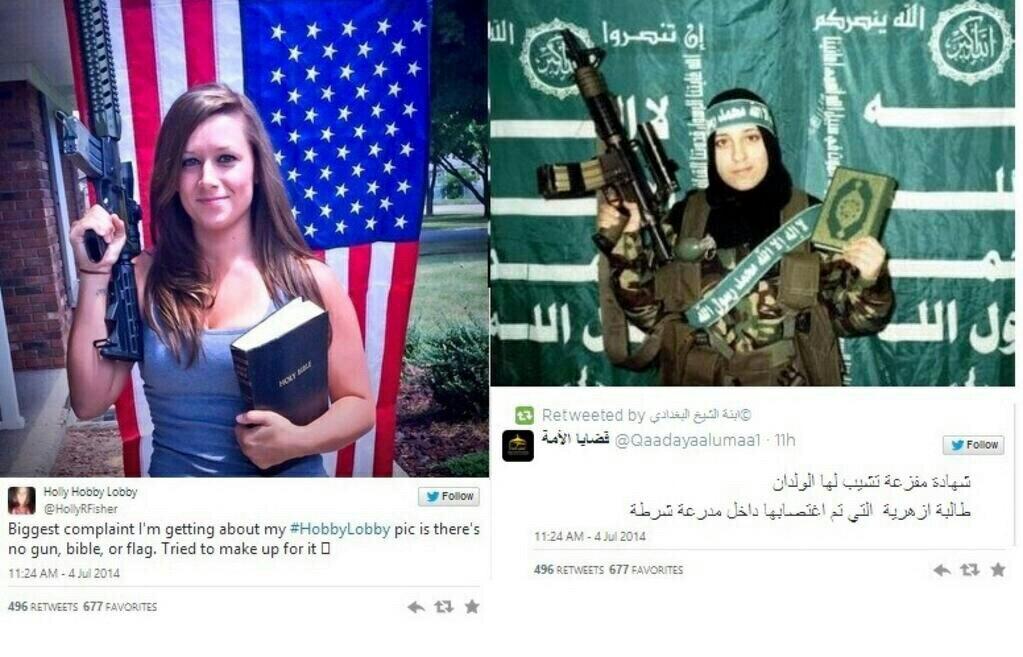 Conservatives are giddily defending Holly Fisher, the woman on the left: Of course we can explain the difference. She’s a good patriotic Christian woman who wants to defend her family!

As if that’s everyone’s first reaction when they see the picture.

David French, a conservative blogger at Patheos, doubled down on that idea (while naming the wrong terrorist, because facts don’t matter when you’re defending the faith):

Truth be told, no sentient leftist would feel threatened by Holly Fisher if he met her, but most would be terrified to the point of incoherence by any true encounter with a woman like Ms. Lewthwaite. No, the visual comparison between a peaceful American intentionally trolling the Left and a vicious terrorist is all about shame and stigma, trying to place the Holly Fishers of the world outside the pale of civilized discourse.

The Left can mock, shame, and rage all it wants, but the fact remains — if a leftist ever does encounter a Sherafiyah Lewthwaite, he would feel far, far better if a Holly Fisher was nearby.

Christopher Hitchens wrote about this exact kind of setup in God is Not Great:

I was to imagine myself in a strange city as the evening was coming on. Toward me I was to imagine that I saw a large group of men approaching. Now — would I feel safer, or less safe, if I was to learn that they were just coming from a prayer meeting? As the reader will see, this is not a question to which a yes/no answer can be given. But I was able to answer as if it were not hypothetical. “Just to stay within the letter ‘B,’ I have actually had that experience in Belfast, Beirut, Bombay, Belgrade, Bethlehem, and Baghdad. In each case I can say absolutely, and can give my reasons, why I would feel immediately threatened if I thought that the group of men approaching me in the dusk were coming from a religious observance.“

Needless to say, Christianity was the religion of choice in many of these cities.

The fact is, when I look at Holly, I don’t feel safe. I don’t know her. I don’t know how she interprets certain passages in her holy book. I don’t know how safely she handles guns. I don’t know how easily provoked she gets. I don’t know how she acts around atheists. The only thing she has going for her is that she resembles all those other right-wingers who, at worst, believe and say idiotic things but don’t necessarily resort to violence. But if I didn’t live in this country, then how the hell would I know that? Not to mention that if the best thing conservatives can say is, “At least Holly won’t kill you,” that’s hardly a compliment.

The point of the image is that both women believe a sympathetic audience would find them admirable. Their religious books are meant to symbolize goodness to other people who already think the words in them are true. They both hold weapons they believe represent strength and freedom. They’re both just daring us to mess with them. Both sides think the other side is batshit crazy. And neither is doing anything useful. (Though this Canadian dude is kind of awesome.)

As Sinclair Lewis is said to have written, “When fascism comes to America, it will be wrapped in the flag and carrying a cross.” It’s frightening that conservatives are working so hard to defend Holly, acting like her picture is no big deal at all. It’s a terrifying response, even if we’re supposed to “know” Holly doesn’t want to kill us.

(Update: Sinclair Lewis may not have written the quote often attributed to him. My apologies.)

July 9, 2014
Christian Pastor Who Tortured a Child Will Spend No More Than Two Years in Prison
Next Post