Ken Ham is furious that Pat Robertson said “you have to be deaf, dumb, and blind to think that this Earth that we live in only has 6,000 years of existence” on his show the other night. 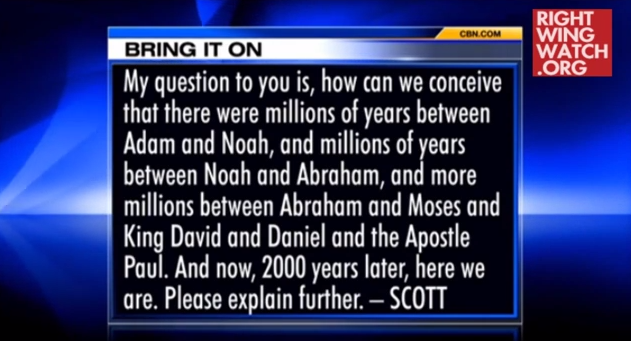 So now, Ham is challenging Robertson to a debate:

I wonder if Pat Robertson would be prepared to discuss these issues with me or one of our AiG scientists on the 700 Club? Or maybe in some sort of debate format at Regent University? We are certainly willing to do that — maybe all of you reading this could challenge CBN/Regent University to allow such a discussion, debate, or forum to occur publicly. I wonder if Pat Robertson, who is allowed to state these things so publicly through CBN will agree to have his statements publicly challenged and tested!

I can see that debate now…

We’re the ones in the center, of course.

I never thought I’d say this, but Robertson should decline because, on this issue, he just knows too much. It wouldn’t be a fair fight…

Oh, screw it. Who am I kidding? That debate would be comedy gold.

Make it happen and get it on pay-per-view. I would pay all the moneys to watch that go down.

And then, after that, Ken Ham can dare a five-year-old to argue with him so that he’ll finally be matched up against an intellectual equal.

May 16, 2014
The Unbelievers, Starring Lawrence Krauss and Richard Dawkins, Now Available to Watch Online
Next Post