On Friday’s episode of “Moyers & Company,” Neil deGrasse Tyson spoke with host Bill Moyers about his upcoming series “Cosmos,” space, and science literacy — it’s one of the most engaging discussions about the subjects you’ll hear on television. 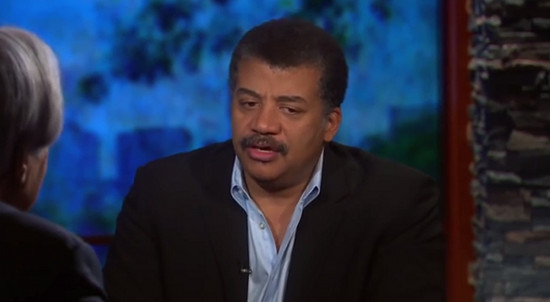 The most controversial part of the interview — though it really shouldn’t be — involved Tyson explaining that he doesn’t believe science and faith are compatible during a discussion of the Big Bang (16:46):

Moyers: Do you give people who make this case, that that was the beginning and that there had to be something that provoked the beginning, do you give them an A at least for trying to reconcile faith and reason?

Moyers: What do you mean?

Tyson: Well, so let me say that differently. All efforts that have been invested by brilliant people of the past have failed at that exercise. They just fail. And so I don’t, the track record is so poor that going forward, I have essentially zero confidence, near zero confidence, that there will be fruitful things to emerge from the effort to reconcile them. So, for example, if you knew nothing about science, and you read, say, the Bible, the Old Testament, which in Genesis, is an account of nature, that’s what that is, and I said to you, give me your description of the natural world based only on this, you would say the world was created in six days, and that stars are just little points of light much lesser than the sun. And that in fact, they can fall out of the sky, right, because that’s what happens during the Revelation.

You know, one of the signs that the second coming, is that the stars will fall out of the sky and land on Earth. To even write that means you don’t know what those things are. You have no concept of what the actual universe is. So everybody who tried to make proclamations about the physical universe based on Bible passages got the wrong answer.

So what happened was, when science discovers things, and you want to stay religious, or you want to continue to believe that the Bible is unerring, what you would do is you would say, “Well, let me go back to the Bible and reinterpret it.” Then you’d say things like, “Oh, well they didn’t really mean that literally. They meant that figuratively.”

So, this whole sort of reinterpretation of the, how figurative the poetic passages of the Bible are came after science showed that this is not how things unfolded. And so the educated religious people are perfectly fine with that. It’s the fundamentalists who want to say that the Bible is the literally, literal truth of God, that and want to see the Bible as a science textbook, who are knocking on the science doors of the schools, trying to put that content in the science room. Enlightened religious people are not behaving that way. So saying that science is cool, we’re good with that, and use the Bible for, to get your spiritual enlightenment and your emotional fulfillment.

Tyson went on to say he doesn’t care what people believe, as long as they don’t try to push their religious beliefs into science classrooms.

It’s really amazing how he can say something so controversial on the surface without denigrating religious people in the process. They can have their faith, he argues, but don’t think for a moment that faith can ever replace what science has discovered. Whenever religious goes up against science, religion loses. It may have its place in society, but that place has nothing to do with explaining the natural world

In all of this, Tyson’s atheism seems apparent, but he never comes right out and says it. It’s something he’s tried to avoid most of his public career — in part because he doesn’t want to get pigeonholed in any sort of belief. He doesn’t want to be known as an “atheist scientist.” He just wants to be known as a scientist. From a strategic perspective, it makes a lot of sense. Personally, though, I wish he would add himself to the roster of openly-atheist science communicators.

But if it means that a few more Christians will be willing to watch “Cosmos” and hear what he has to say, more power to him.

January 21, 2014
UConn Assistant Football Coach: 'Jesus Christ Should Be in the Center of our Huddle'
Next Post