The Ugly Side of Modesty

Pop your blood-pressure meds, kiddos, because I’m about to take you on a carnival of terrible, horrible, no-good, very-bad gender relations, according to one conservative Christian website.

We have to start by talking about “modesty.” In my opinion, the teaching of modesty to teen and preteen girls is one of the most toxic and divisive aspects of Christian culture. It can have life-long implications in the way that women dress, act, and feel about themselves, as well as their understanding of how to interact with men. It comes from pure, unfettered patriarchal nonsense that reinforces the idea that men are slavering goons, hapless at the sight of a tantalizing shoulder or waist. It is the woman’s responsibility to mitigate mens’ desires by covering up all of their “problem bits.” (Oh, and no need to worry about same-sex attraction. That doesn’t exist, don’tcha know!)

But which parts should they cover up? It’s not always clear cut. Hair? Breasts? Legs? Feet? Shoulders? The suggestion of undergarments? Butts? Thighs? Smoldering glances?

For those outside of Christian culture, this is a laughable non-problem. Um, hey, guys, don’t you know that people are attracted to wildly different things and you can’t possibly create a standard that crushes every salacious impulse in every conceivable instance? Also, not every guy is a sex-crazed maniac like you think they are.

But if you’ve grown up with Christian dogma, especially if you’re male, you’re probably familiar with “stumbling blocks” (a.k.a. “Anything that might possibly be considered a sin that I might accidentally or purposefully engage in”). The “stumbling blocks” vary from denomination to denomination but, in general, the idea is that any activity that takes your focus away from God is a potential sin.

At the top of this list of stumbling blocks in large, unfriendly letters is: The Female Body.

In order to get young Christian women to comply with this unnecessary modesty, there’s an obvious method: Start indoctrinating them young. Really, really young.

Take an adolescent or a teenager, preferably with already-skewed body image issues, at a time when they are physically transitioning from childhood to adulthood, and heap on the shame and guilt. Tell them how sinful their body parts are. Tell the girls that they need to reserve the “gifts” God gave them for the man that He selects to be their husband. Failure to do so means giving away “a piece of themselves” to random, stumbling men. Then, tell them how easy it is to cause men to stumble, to force them to be hyper-vigilant in their Quest to Be Non-Offensive to Everyone.

That brings us to SecretKeeperGirl.com.

Geared towards girls as young as eight, SKG is an organization that promotes devotional books and a tour created to help mothers bond with their daughters through a sleep-over, lock-in style event complete with worship sessions and a fashion show. The whole organization hopes to instill the value of dressing modestly in a way that will “stick” with the girls for the rest of their lives.

So, what constitutes modesty in this particular breed of Christianity? Let’s tour a few screenshots from the website’s “Truth or Bare” section, a guideline for helping young girls decide whether or not their outfits are modest. 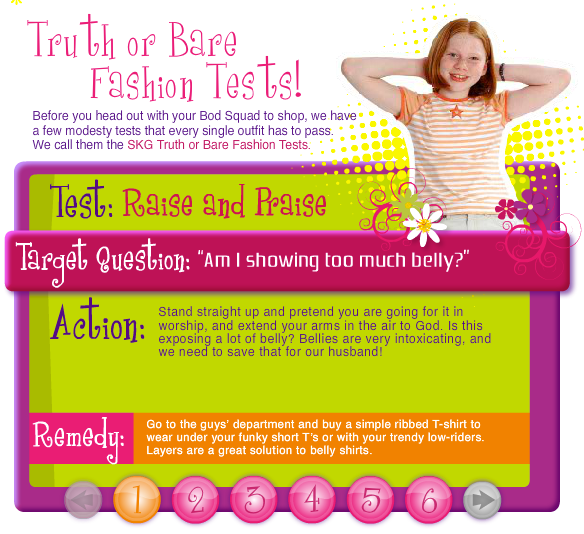 Oddly enough, for a group pushing very hetero-normative and gender-essentialist (“men are men and women are women!”) concepts, this breed of Christianity — the one I am familiar with — has no problem putting girls in clothing from the men’s section, nor would they care that the design and cut of said t-shirts would be totally unflattering to female bodies.

Naturally, there is no blurring of gender lines for men whatsoever in the church. Any man displaying feminine characteristics or clothing could expect a quick and thorough praying-for, and, at minimum, a stern rebuke from the church elders. 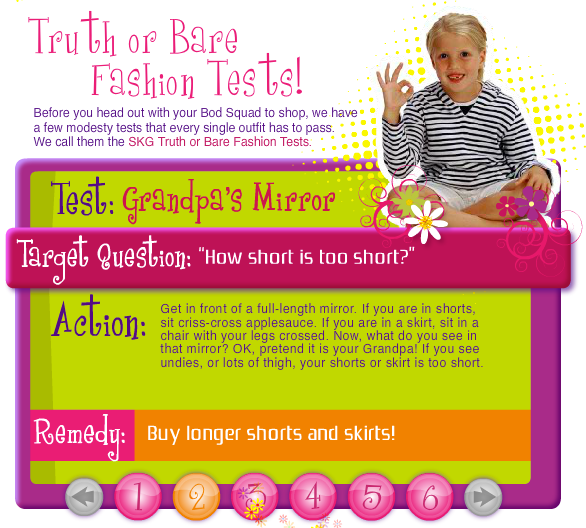 First off, what creepy grandfather is looking up an eight-year-old’s skirt? It is no coincidence that the person making the imaginary judgment call here is male. (With incestuousness tossed in just for good measure!)

Second, longer skirts and shorts do not grow on trees.  It is not particularly viable to tell an 8-year-old to just go “buy longer shorts!”

Third, why not just teach them not to sit cross-legged while wearing a skirt? It seems to me that overhauling a wardrobe is the least efficient way of dealing with a “problem” that can be solved by sitting in a different position. 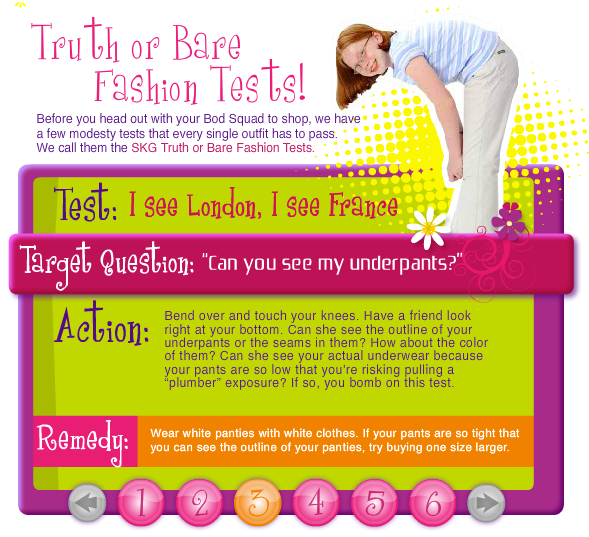 Ah, yes, the “bend over and touch your knees” directive from the days of Christian yore. Are you receiving a spanking with a wooden spoon? Are you checking to see if anyone can see any part or suggestion of your undergarments? Or something more… sinister?

Beyond the creepiness of this little ritual and the level of obsession one must have to ensure that nothing ever shows ever, it’s also just bad fashion advice. FYI, while wearing thin fabric, wear undergarments that are close to your skin color; unless you’ve been dipped in bleach over and over again, wearing white underwear with white trousers will show through just as strongly. 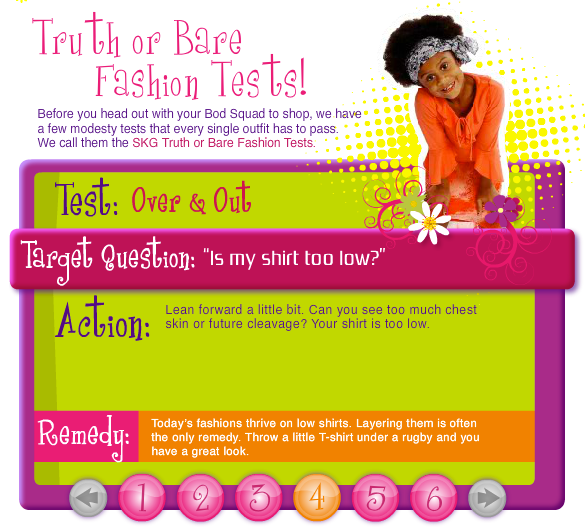 Oh, no! Not only do these eight-year olds have to worry about their intoxicating bellies, Grandpa’s opinion on skirt length, and creepy rituals involving ass-gazing, they now have to worry about potential modesty issues that are not even current realities.

To be clear, this has nothing to do with peer pressure, purity, or an individual’s empowerment: This is about control. There is no sane reason that an eight-year-old should be worrying about whether or not their potential future cleavage is showing when trying on clothing. Advocating this kind of insanity only creates paranoia and concern over the nebulous, constantly changing, unseen forces that dictate “modesty.”

This is the culture I grew up in and I know the kind of damage it causes later in life. I am living proof of how destructive it can be and how long it can take to recover.

Even reading the website was difficult for me, since, at one point, I was the girl that this website wanted me to be. I don’t remember being indoctrinated this young with these beliefs, but I painfully remember being the girl who never visually fit in because of the clothes I wasn’t allowed to wear. During my middle school years, where blending in is a huge benefit, being forced to wear dowdy and ugly clothing seemed to add insult to injury; not only did I not choose my style for myself, I also was forced to wear clothing designed for women more than twice my age (and size).

At a current 5’9″ and 125 pounds, XL sizes ought to never grace the inside of my dresser, but huge t-shirts were a staple of my wardrobe, due to concerns that they might “shrink in the wash” and become immodest (again, paranoia over potential immorality and sin). Since I have always been tall, shorts were a practical impossibility, unless I wore boys’ athletic shorts, under these modesty requirements. Spaghetti-strap tank tops were not allowed in my house. It made for many hot, humid Indiana summers spent indoors. I was ashamed at how my wardrobe made me feel. At a certain point, more comfortable clothing elicited more panic and shame, once the ideals of modesty were well-enough ingrained.

The result of this forced, visual separation, instead of empowering me by allowing me to realize my “inner beauty,” made me feel insecure and unattractive. Here I was, a pre-teen, keenly aware that I should be developing my own sense of personal style, only to have it smothered by the ideals of my parents’ church.

So, why does this all matter? Some random contributor on Friendly Atheist is bitter that she didn’t get to dress how she wanted to in middle school… so what?

From my perspective, it’s not so much about the clothing itself — it’s about a choice, a choice that is granted to boys and taken away from girls. Not having a choice means not being able to dictate or even participate in the discussion. There is no way to fight against purity culture while immersed in purity culture, and the psychological damage extends far beyond the closet. The eight-year-olds that are targets of this and similar campaigns have no idea and no ability to see the damage being done. This information is being presented to them while they still lack the cognitive ability to think critically. That’s not an accident.

This isn’t really about the grudge that I carry when I go shopping. It’s about me hating what I see and feeling dirty in certain clothing without rational basis. It’s about me learning to fear the “power” in my chest, legs, and shoulders. It’s about me being told that parts of me are so wrong they must be covered. It’s about men like my husband being taught to distrust women for the “sinfulness” they carry due to inherently being attractive to men.

Issues like this one are what make me wonder what the hell people are thinking when they claim that feminism has nothing to do with atheism. Is it a perfect cross-over? Do all of the issues perfectly align with one another? No, of course not, but neither is any issue that we discuss at all in the atheist movement. We don’t talk about just “atheist” issues; we already know why we don’t believe in the supernatural. Just like anything else, the subjugation and the subordination of women is driven, primarily, by irrational religious belief thus making it a topic of concern for atheists.

As atheists and humanists, we generally oppose harm done to others (I hope), particularly at the hands of religious belief, but more broadly by irrational beliefs in general. The good news is, the damage isn’t permanent. It can be undone, with some time and effort, but that effort is stymied with the constant assertion that these aren’t issues that are “atheist enough” to be talked about within our community.

I am an atheist, and I am a feminist, and I am coming to your online community with more than a few scars from my religious past. There are lots more people, men and women, just like me, who bear similar scars. The question is, will this be the kind of community worth joining, or will we have to look elsewhere for support and healing? Will our concerns and stories be welcomed, or spurned and judged as not atheist-y enough to warrant inspection?

I hope I don’t have to look elsewhere. I hope you’ll let these issues be part of our conversation.