A Suggested Alteration to the FFRF ‘Winter Solstice’ Poster

Several times in the last few years, the Freedom From Religion Foundation has attempted to put up a poster in government buildings across the country where a religious holiday display such as a nativity scene has been allowed. This has had mixed results, from the poster being outright refused, to being stolen, to being begrudgingly allowed, and now most recently, disallowed by a federal court because it was deemed to be too directly a rebuttal of the nativity scene. Here’s the original: 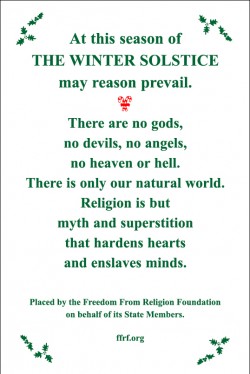 The merit or weakness of that court’s decision can be argued exhaustively, and it will likely be appealed, but that’s not the point I want to make here.

Although I’m a member of FFRF and I’m very pleased with much of the work they do, I’ve never been comfortable with the original poster written by Dan Barker, simply because it just seemed too Scroogey. It has nothing positive to offer other than “may reason prevail,” which is good, but much of the rest of the text seems bitter and condemning.

I got the impression that it was intended to be so awful that it would hopefully discourage allowing any religious displays in government buildings in order to avoid having to allow that one. Perhaps my impression is not correct, but if that is the underlying goal, I don’t think it will succeed. More likely, atheist displays will increasingly be allowed alongside religious displays, and so I think it would be to our advantage to start offering positive messages instead of just “Bah, humbug!”

Yes, I agree that what the original poster says is true and correct, but perhaps it’s time to move beyond that to making positive statements about what we support rather than just what we condemn, and to affirm that during the coldest, most challenging season for all people, atheists can be a source of guidance, encouragement, and practical assistance for everyone and anyone.

I have no idea if Mr. Barker has ever shown any interest in changing his message. It would be nice to hear from him. Here’s a graphic that I very quickly threw together, so please forgive the visual or textual imperfections. What do you think of the general idea and spirit of this? 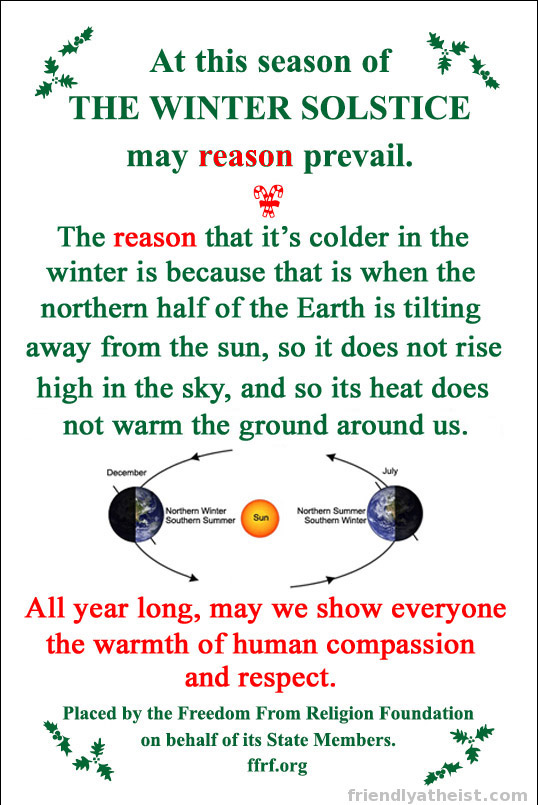