After Surviving a Car Accident, God Doesn’t Need a Thank-You

Neece, a blogger at Heaving Dead Cats, got into a horrible car accident earlier this week: 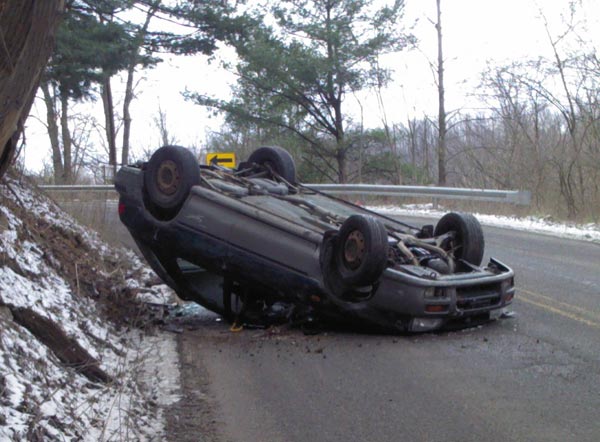 She’s ok, for the most part. Minor injuries.

The car… not so much… but after something like that, the car is really the least of your worries.

But the reason I’m mentioning it here is because of how grateful she is toward everyone and everything that helped her get through the ordeal.

I thanked God and Jesus all the wonderful strangers who stopped and helped me when I was so shaken up; the truck driver who called 911 for me, the two guys who made sure cars didn’t have a bigger accident by directing traffic for about 25 minutes, and all the fire and other guys. And even the cop, who was very nice, didn’t grill me or make me nervous, and (most importantly) didn’t cite me (since it was just an Act of God unfortunate accident).

So I was standing there waiting for them to flip my car over and tow it, and for my friend to come pick me up so that I could help him with his project (yes, I still helped him out. But he bought me dinner with dessert, so it was all good, lol). And I realized, damn, this could have been so much worse and I took the time to count my blessings evaluate the good things.

I had my seatbelt on. If I hadn’t, I might have gotten half thrown out of the window, or otherwise seriously battered or even killed. The seatbelt did a great job to keep that all from happening. So I was grateful to seatbelt designers and makers.

When you find yourself surviving a bad accident with relatively few injuries, it’s easy to resort to supernatural thinking to explain why you were so lucky.

But it’s far more honest to thank the people who really played a role in keeping you safe. It’s almost jarring to see someone do it because it happens so rarely, but it’s good to know some people can keep their minds in the right place after going through a traumatic event like that.

January 19, 2012 Secular Coalition for America Flunks More Than 50% of the U.S. House of Representatives
Browse Our Archives
What Are Your Thoughts?leave a comment