Here’s a politician who doesn’t get it… and keeps digging herself into a deeper hole.

Yesterday, Republican Rhode Island State Senator Beth Moura tweeted an insult about Jessica Ahlquist, snidely calling her the ‘ACLU’s sweetheart’. That suggests to me that the ACLU manipulated Jessica into fighting this battle, a claim which is not at all true. Her uncle, Steve Ahlquist, even said, “She was interested in doing this. She found this issue herself, she was very passionate and she glommed onto it.” 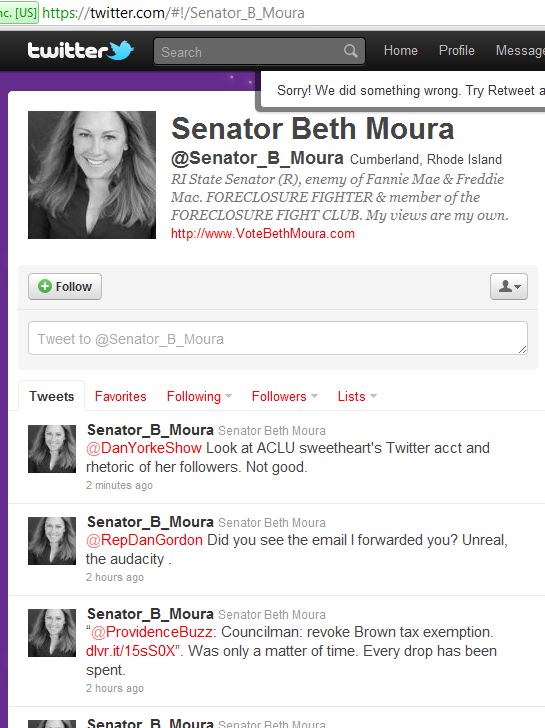 After that comment, atheists on Twitter let her know that she was acting like a fool. She was behaving immaturely. She was acting undignified for someone of her stature.

Twitter user @ologies said that Moura was putting her foot in her mouth.

How did Moura respond to that?

She called the police. Because, apparently, that was a violent threat and not the use of a well-known idiom… 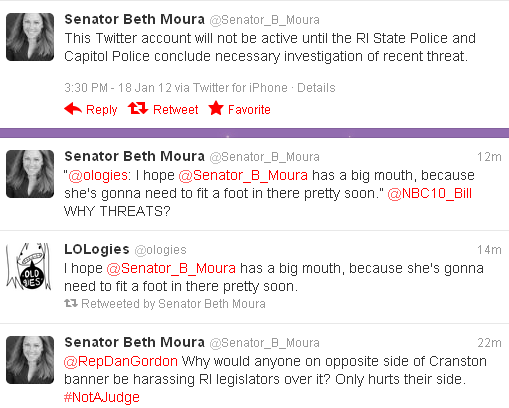 *Sigh* (I guess that’s what happens when Wikipedia is down for the day…?)

Like I said, she just keeps making herself look increasingly ignorant.

Beth Moura: Enjoys criticizing a brave high-schooler. Runs away when she gets called out on it.

Mark Panzarino, The Honest Atheist, actually got a voicemail back from Moura… he transcribed it and offers his commentary here:

An excerpt from the rebuttal:

… Senator Moura made several comments about Atheists being angry — a comment which includes Jessica Ahlquist in the general sense, of course and is bigoted and ignorant in the specific sense. The “debate” between Ms. Ahlquist and the radio journalist (@JohnDePetroWPRO) did not involve the Senator at any time…unless she involved herself in the discussion willingly. And was ignored…willingly. The Senator was not “brought in”…and the Tweets reveal this to be true.

If you want to show your support to Jessica, contributing to her college fund is one way to do it:

(Thanks to Sarah for the screenshot!)

January 19, 2012
Sensible Voices Emerge in the Wake of the Cranston High School West Saga
Next Post