Survey Says: A Record Number of Americans Have No Religious Affiliation

The percentage of Americans who claim no religious affiliation is now at 29%, higher than it’s ever been.

That’s the takeaway from a major new report out today from the Pew Research Center. Using information gleaned from their 2020 and 2021 National Public Opinion Reference Surveys (NPORS), they are seeing a continued push away from organized religion — a trend that we’ve been seeing for many years now.

Just to give you a baseline here, in 2014, when Pew released a landmark study about religion in America, they found that the percentage of Americans with no religious affiliation was at 22.8% (up from 16.1% in 2007). That was a bombshell at the time.

Since that time, we’ve seen the presidency of Donald Trump, the white evangelical shift toward Trumpism and bigotry, a pandemic that was made worse by religious Americans who refused to abide by sensible restrictions, and more sex scandals in the Catholic Church and major Protestant denominations. While this survey doesn’t attempt to explain the trend, it shows that organized religion is still losing ground. 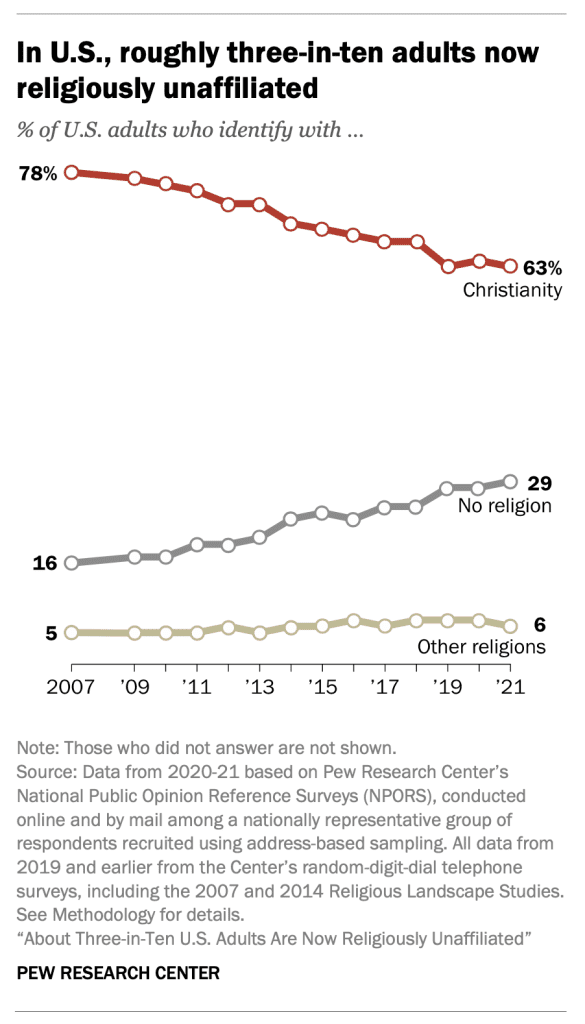 I feel like that chart doesn’t do justice to what’s actually happening because “Christian” is used as a catch-all term. Catholics, white evangelicals, and other Protestants may be united under Jesus, but there’s really no reason people should lump them together. In fact, as Pew also found, most of the ground we’re gaining — and they’re losing — is the result of Protestants ditching the label.

Maybe you see all that and assume the decline in organized religion has something to do with how toxic those labels have become. But there’s other information suggesting that belief in God itself is on the decline, not just the various groups that exist to worship Him. Pew found that the percentage of adults who pray every day is also at an all-time low — under 50%! 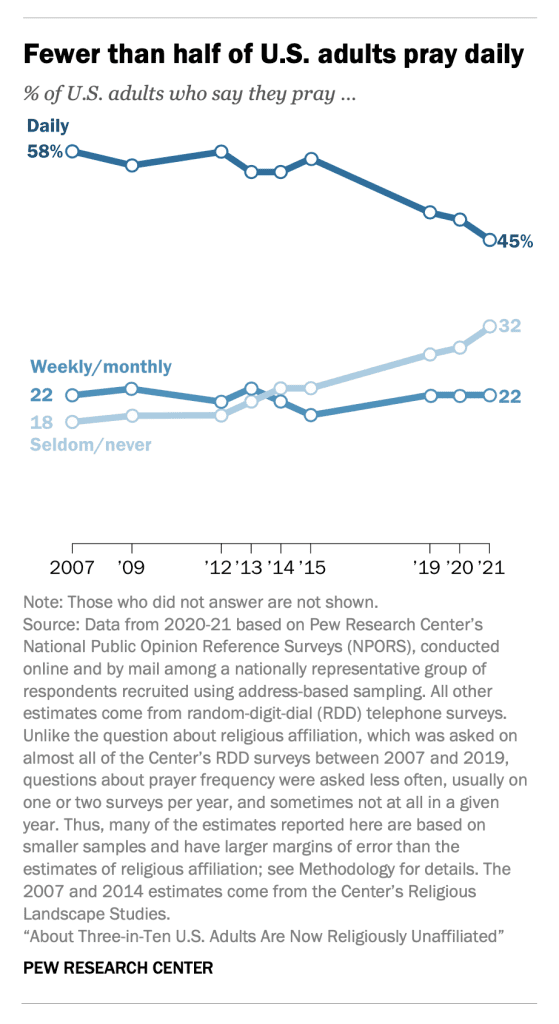 I thought for a moment that those daily prayers just shifted to weekly/monthly prayers… but that’s not the case here! It’s actually worse than that if you’re a fan of religion. The decline in daily prayer mirrors the rise in not praying at all (or doing so rarely). So it’s not that people shifted from being religious to thinking of Christianity as something they do on a Sunday morning. They shifted to finding a better use of their time entirely.

In fact, Pew says, while it’s tough to measure if religion is an important part of people’s lives, their surveys show that only 41% of Americans feel that way today, compared to 56% back in 2007. (Those are not apples to apples comparisons, though, because they come from different types of surveys.)

In case you’re wondering if these numbers mean there’s a rise in atheism, sorry to burst your bubble. Atheists are still about 4% of the population, as we have been for several years. Agnostics have been around 5% for a while now too. The rise in Secular Americans comes entirely from the “Nones” camp, which has jumped from 12% in 2007 to 20% today: 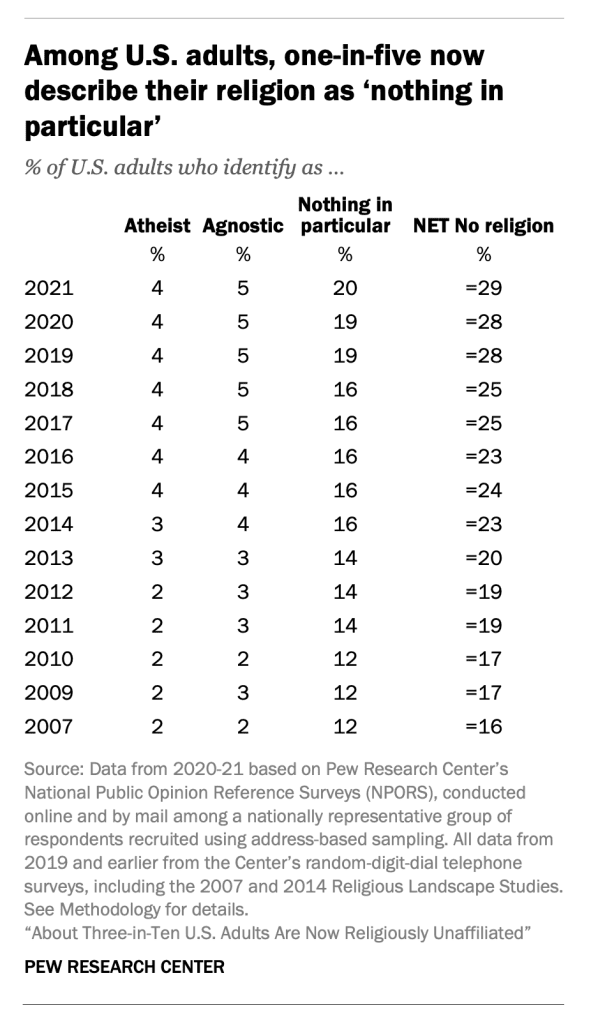 I’ll take it. It could be so much worse.

The next step, however, is converting those numbers into political power. I mentioned earlier that the “Christian” catch-all term didn’t mean all that much, and I could say the same here. People with “no religion” are not monolithic in their views, at least compared to atheists, who are overwhelmingly aligned on the side of progressive politics. It doesn’t matter how large our numbers grow if we vote below our weight compared to conservative Christians. It also means if Democrats want to court a reliable voting bloc, they need to play up their support for church/state separation, science education, LGBTQ rights, reproductive justice, racial justice, comprehensive sex ed, reason-based legislation, etc. All those things Republicans and their Jesus-loving voters actively oppose. 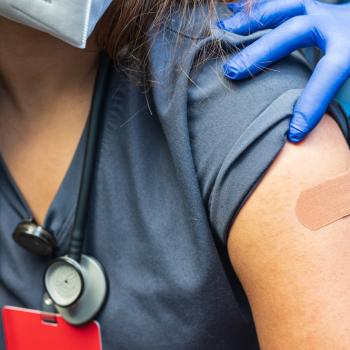 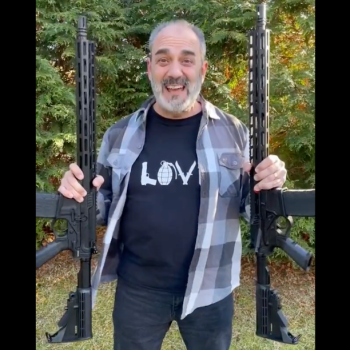