After Leaving Christianity, Here’s What One Atheist is Still Deconstructing November 28, 2021 Hemant Mehta

After Leaving Christianity, Here’s What One Atheist is Still Deconstructing

Drew McCoy (a.k.a. Genetically Modified Skeptic) was raised in a very conservative Christian home and left it all behind five years ago.

He thought the hardest part of that journey — getting over God — was over. But as he talks about in his latest video, there are still so many parts of his life he’s still deconstructing.

Among the things he’s still working through? The idea that someone’s worldview, whatever it is, is the exclusive path to morality. He believed that as a Christian. He once believed that about a God-free “reason”-based existence. But it’s obviously more complicated than that.

He’s not alone in trying to deprogram all those harmful ideas Christianity taught him — ideas that he hd no reason to question at all until he was on the other side of the religion spectrum. The exvangelical movement has been full of people working to get over those barriers and helping others do the same. It helps to raise these issues publicly, though, so others in the same position know they’re not alone.

November 28, 2021
Christian Mommy: Female Preachers Are Heretics Who Were "Abused in Their Lives"
Next Post 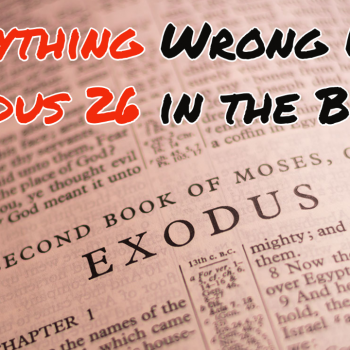 November 28, 2021 Everything Wrong With Exodus 26 in the Bible
Browse Our Archives
What Are Your Thoughts?leave a comment