The Church of a Christian Hate-Preacher Was Bombed Over the Weekend January 25, 2021 Hemant Mehta

On Saturday morning, an improvised explosive device went off inside First Works Baptist Church in El Monte, California. No one was hurt, thankfully, but no suspects have been apprehended yet. It’s obviously an awful situation made all the more newsworthy because of the man who runs the church.

That would be Bruce Mejia. His church used to be called “Faithful Word Baptist Church in Los Angeles” — an offshoot of the church of the same name in Arizona. That’s not a coincidence. Mejia belongs to the same brand of New Independent Fundamentalist Baptist churches as his mentor Pastor Steven Anderson, and it came through in his sermons.

For example, here’s Mejia explaining why celebrating Halloween is evil and why little girls who dress like Disney princesses are whores:

… we as Christians, when this stuff comes around, we need to be the ones who are casting down that imagination and say, “Sorry to crash the party, Christians. But your trunk-or-treat is wicked.” “Sorry to, you know, crash the party on this whole fun you’re having here, I know you already bought your Frozen costume, but trick-or-treating… is wicked as hell, and you’re worshipping Satan actually, and your daughter is dressed like a whore, because that girl in Frozen is a whore. Sorry to crash the party on you about that. She’s not a princess. She’s a whore.”

He also claimed LGBTQ stood for “Let God Burn Them Quickly” and said preaching against gay people isn’t enough because they deserve to be executed.

Make a clip out of that and put that in the news.

Was that bigotry the reason his church was bombed? There’s no evidence suggesting it, but anyone looking for a motive is undoubtedly grasping at that straw. It would also be strange given that the sort of people who oppose Mejia are the people who reject violence in all forms.

Laura Eimiller, a spokeswoman with the F.B.I.’s Los Angeles field office, said that no one had been taken into custody and that it was too early to determine a motive behind the bombing. “We have not ruled anything out,” she said.

Ms. Eimiller said that bomb technicians from the Los Angeles County Sheriff’s Office were working with the F.B.I. and its evidence response team to assess the damage.

For his part, Mejia is already acting like a martyr for the cause. He preached outdoors on Sunday morning. The sermon’s title? “The Blessings of Persecution.” 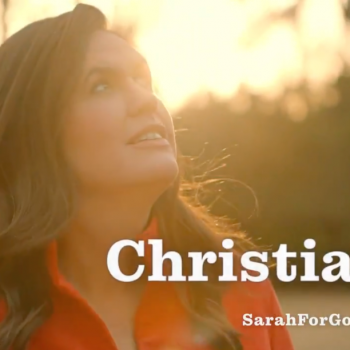 January 25, 2021 Christian Liar Sarah Huckabee Sanders Announces Run for Governor of Arkansas
Browse Our Archives
What Are Your Thoughts?leave a comment