It’s never good when a website that’s almost certainly satirical posts something silly… and has the local news media chasing after the story.

The site is “Christians Against Dinosaurs,” which for years now, has lashed out against depictions of dinosaurs anywhere and everywhere under the premise that dinosaurs are obviously fake and that scientists planted fossils to convince people to ditch religion. (For what it’s worth, even Creationists accept that dinosaurs are real; they just believe dinosaurs existed a few thousand years ago.) The Facebook page for the group is meant to be entertaining, not serious. It’s a perfect example of Poe’s Law at work because commenters come off as sincere.

A couple of weeks ago, however, a post to the private group focused on a large dinosaur replica that sits outside a McDonald’s in Tucson, Arizona; it’s been there since the restaurant’s opening in 1994, not long after Jurassic Park came out, and it’s so distinctive that they never removed it. 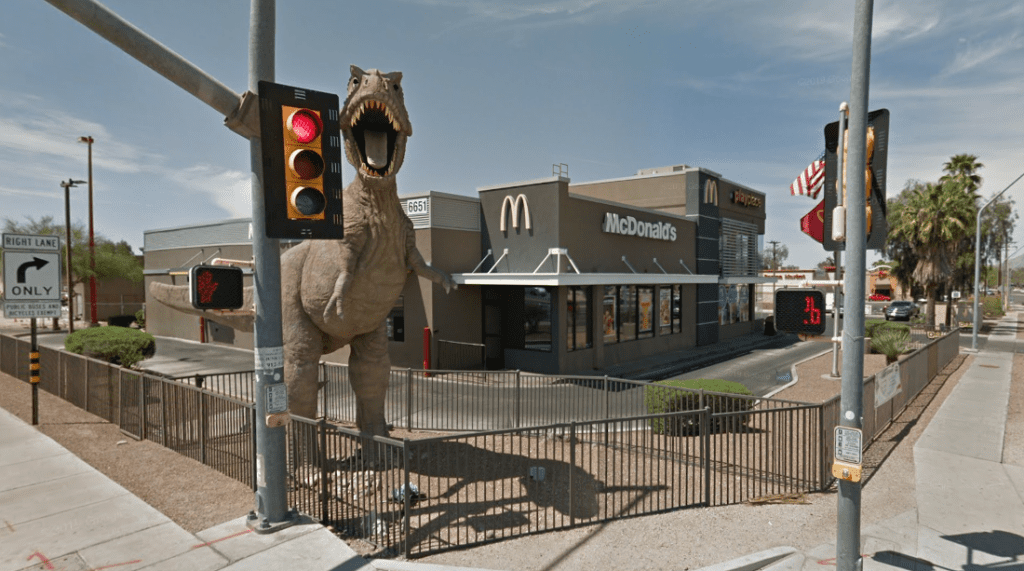 Please help! This McDonald’s has this dinosaur and refuse to remove it! This is in Tucson, Arizona. Call the manager and demand the removal of this blasphemy! 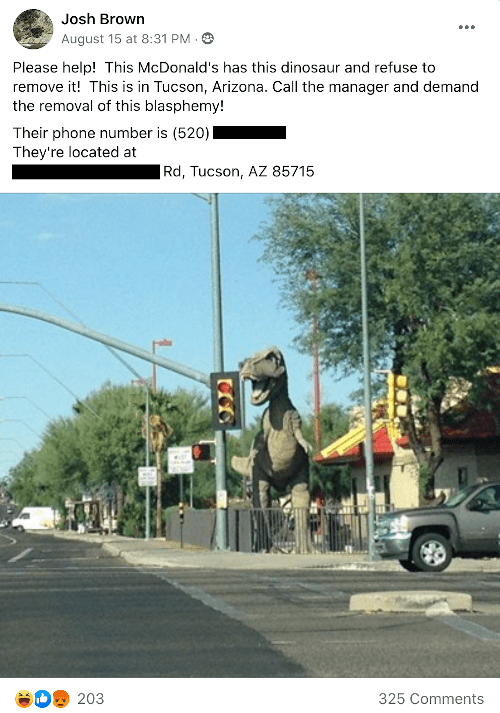 The actual phone number was posted and people actually called.

So the Arizona Daily Star got in touch with Josh Brown, the person who posted about the dinosaur (and whose personal Facebook page is nothing but memes and the tagline “who gives a shit?”):

… CAD poster Josh Brown insists he isn’t joking around. Reached through his Facebook page Tuesday night, he said he lives and works in Tucson, and he doesn’t see anything funny about “lying to our children.”

“It seems to me that every dinosaur story and display or dinosaur themed event is furthering the myth that the Earth is much older than the Bible says it is,” Brown said via Facebook Messenger. “Yes, the dinosaur should go unless they’re willing to compromise with a plaque of some kind stating that it’s a fictional character.”

In a later post to the CAD community, Brown took aim at a different drive-thru dinosaur, this one in front of the McDonald’s off I-10 in Benson. He called it a “conduit of lies and dinoporn that are corrupting our children’s minds.”

He’s almost certainly joking around. Also, it takes a real troll to insist the Bible is real but dinosaurs are fake…

In any case, the restaurant isn’t taking down the dinosaur. But the trolls got the attention they wanted, and they made Christianity seem even more absurd than usual. So… success? 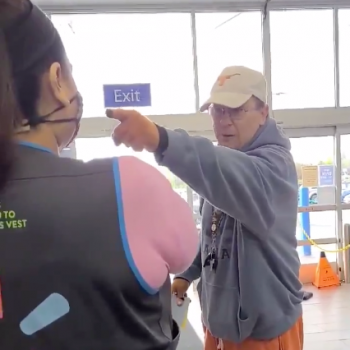