Starting in 2004, singer and guitarist Jon Steingard rose to fame in Christian circles with the band he’d just joined, Hawk Nelson. Seven albums later, Steingard, now 36, is done. He’d started to feel troubled every time he and his bandmates climbed on stage to praise God. His doubts about the existence of a Creator and the authenticity of the Bible gnawed at him, poisoning his joy in performing.

Now he’s free, Steingard announced on Instagram yesterday — in a half-pained, half-relieved confession that runs to about 2,200 words.

I’ve been terrified to post this for a while – but it feels like it’s time for me to be honest. I hope this is not the end of the conversation, but the beginning. I hope this is encouraging to people who might feel the same but are as afraid to speak as I am. I want to be open. I want to be transparent with you all – and also open to having my heart changed in the future. I am not looking for a debate at all – just a chance to share my story in the hopes some good can come from it. I love you all.

After growing up in a Christian home, being a pastor’s son, playing and singing in a Christian band, and having the word Christian in front of most of the things in my life, I am now finding that I no longer believe in God. … It didn’t happen overnight or all of a sudden. It’s been more like pulling on the threads of a sweater, and one day discovering that there was no more sweater left.

Steingard, a resident of southern California, grew up in a Christian family in Ontario, Canada. His dad was and is a pastor, with all that that entails.

As far back as I can remember life was all about the church. It was our community. It was our family. … It wasn’t a part of our life, it was our life. When you grow up in a community that holds a shared belief, and that shared belief is so incredibly central to everything, you simply adopt it.

It’s impolite to call it brainwashing, but in the end, that’s what it was. (Kids will believe anything. For a while, when they were still in the single digits, I made my two youngest daughters think that chocolate milk comes from brown cows, and regular milk from white ones. It took no effort at all. I said it, they believed it, and that was that.)

Remarkably, one of the key things that pushed Steingard out of his bubble was a force from within that bubble. When he began opening up, in confidence, to other Christians around his age, they hesitatingly confirmed that they harbored serious misgivings too.

I’ve had private conversations with trusted friends about my doubts, and discovered to my absolute shock that they are shared by nearly every close friend my age who also grew up in the church. I am stunned by the number of people in visible positions within Christian circles who feel the same way as I do. Like me, they fear losing everything if they’re open about it.

He wrestled with basic but big questions that not even the best Christian apologists could answer convincingly.

If  God is all loving, and all powerful, why is there evil in the world? Can he not do anything about it? Does he choose not to? Is the evil in the world a result of his desire to give us free will? OK then, what about famine and disease and floods and all the suffering that isn’t caused by humans and our free will? …

Consulting and discussing the Bible didn’t answer my questions, it only amplified them.

Lots of other things began bothering Steingard about the Good Book. God often seemed so very un-godlike. Dickish, even.

Why does God seem so pissed off in most of the Old Testament, and then all of a sudden he’s a loving father in the New Testament? Why does he say not to kill, but then instructs Israel to turn around and kill men, women, and children to take the promised land? Why does God lead Job to suffer horrible things just to win a bet with Satan?! Why does he tell Abraham to kill his son (more killing again), and then basically says, “Just kidding, that was a test”? Why does Jesus have to die for our sins? … If God can do anything, can’t he forgive without someone dying?

Clarity arrived during a conversation with his father-in-law — a pastor, like Steingard’s own dad. When the rocker brought up a particularly unpleasant sexist passage in 1 Timothy,

… My father-in-law asked me if I’d been reading the King James version, because he felt King James had put his own spin on a lot of things and that version couldn’t fully be trusted.

Steingard took it from there, saying

He replied. “Well, if you believe that, what do you have left?”

And just like that, the singer realized the house of cards had come down.

Not that he’s an atheist now, per se.

I’m open to the idea that God is there. I’d prefer it if he was.

But no more church visits for now, no more Bible reading, no more praying — none of the Christian staples that, to Steingard and his wife Jessica, had become joyless obligations.

Stepping away from belief in God felt like a loss in some ways — but it’s felt like freedom in others. … [W]e have a tremendous sense of relief now. …

It’s going to be 72° here in San Diego today. The sun is shining. It’s a beautiful day. No sweater needed.

I can’t admire him for the sappy pablum he recorded on those seven albums; but I do respect him a helluva lot for following his conscience at the expense of his career and, possibly, his relationships with friends and relatives.

Steingard has turned to video editing and directing. I hope he finds satisfaction, financial security, and plenty of new friends in that field. 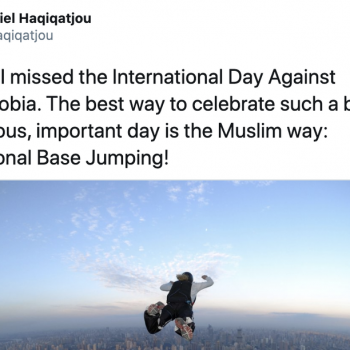 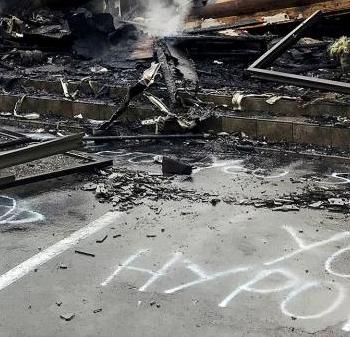 May 22, 2020 Atheist "A" Logo Found Near Graffiti at Site of Burned Down Mississippi Church
Browse Our Archives
What Are Your Thoughts?leave a comment