We’ve seen plenty of dissent against the #ChurchToo movement (the Christian version of #MeToo), usually from men who stand to gain from defending toxic churches and preachers. But it’s especially disheartening to see it coming from a woman, as we do in this video by Lisa Bevere, a best-selling Christian author.

While I hesitate to define a woman by her marital status, it’s relevant to mention that her husband is John Bevere, a John Piper-esque preacher who also espouses “traditional” complementarian thinking.

The TL;DR version is this: stop talking about your sexual abuse. It makes the church look bad. (She also throws in a Godfather reference for funsies. Because nothing says “shut up” like invoking the mafia.)

That’s a threat if I’ve ever heard one.

When we attack the church on social media, we are taking our mess-ups to a mob. Jesus already promised that the world is going to hate us. This does nothing but confuse the issue.

Okay, couple things: it’s not “attacking” the church when you take to social media to talk about abuse — it’s exposing. Any church that tries to cover up abuse by its staff to preserve their reputation is wrong and deserves to be exposed, if for no other reason than to warn other people who already attend, or are thinking of going there.

Second, Jesus told his followers to expect to be hated in a time when being a Christian — that is, worshiping something or someone other than the Roman emperor — was punishable by death. I’m not getting all that worked up about people who condemn Christians who have a lax attitude about the severity of sexual abuse.

Bevere wrote a follow-up post on Facebook a few days ago to explain that she does encourage abuse victims to go to the police. But that caveat probably should have been mentioned in the video, and she does herself no favors by doubling down on the same rhetoric about how Christians should never air dirty laundry if they can help it. (Does she not know that police reports would be part of the public record?)

I can’t think of a single church that’s been affected by the #ChurchToo movement — that’s been exposed for harboring an abusive leader — that shouldn’t have been. They all deserved the reckoning. For once, churches should embrace more transparency. It’s better for everyone. 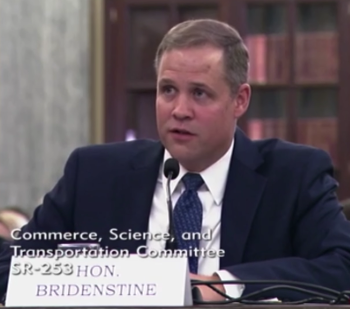 June 8, 2018
NASA Chief, Once a Climate Science Denier, Changed His Mind Due To New Evidence
Next Post