It all started with a viral video released on Friday by conservative comedian Steven Crowder.

In it, he claimed Amazon’s Echo — or at least the digital voice at the center of it — was a “CRAZY SJW LIBERAL.” His evidence? When you asked the device “Who is the Lord Jesus Christ?” it responded by saying Jesus was a “fictional character.”

A number of conservative news sites fell for the hoax, including RedState and Ben Shapiro‘s The Daily Wire, and expressed outrage at the “progressive propaganda.”

RedState, a popular website among conservatives, earnestly said that Amazon founder Jeff Bezos was using the robot to push an agenda.

“We normally associate the Washington Post as his venue for spreading his progressive propaganda, but it turns out Alexa, the digital assistant produced and distributed by Amazon, is another way he pushes his agenda,” the website said.

As I said, Crowder is a comedian, so it wouldn’t be surprising if he did this as a joke. But, after being called out for it by people who fact-check things, he actually doubled down on his assessment of the Echo, telling the Daily Wire that he deserves an apology from anyone who doubted him.

The outlet actually retracted its initial article after discovering Crowder’s claim was false, but later republished a new story claiming to have “proof” of its veracity and calling those who claim otherwise “conspiracy theorists.”

The video of the clearly “editorializing” responses Alexa provided to simple, direct questions resulted in a flood of conspiracy theories accusing Crowder of “faking” the whole thing. In response, on Monday Crowder posted the raw footage of the back and forth with Alexa proving that her leftist slant is no “hoax.”

Crowder introduces the raw footage… by slamming those accusing him of trying to pull off some kind of hoax. No, “Simon says” mode wasn’t on, he explains, and they didn’t fake Alexa’s voice or ask Alexa different questions then deceitfully edit them for their purposes.

Crowder also said atheists appeared to be the most upset by his video, which he said surprised him:

“What’s so funny is the atheists are the ones who are the most angry about. I mean, she said ‘Jesus Christ is a fictional character,’ which is exactly what they believe, so you’d think they’d be happy about it,” he said.

“Whoever entertained these conspiracies owes an apology,” Crowder said in an email. “And hopefully will learn to trust Alexa a little less.”

As an atheist myself, I can tell you why I’m angry: Crowder is lying to people about what Amazon’s product does. He’s the only one who owes people an apology.

Amazon didn’t respond to my request for comment, but I personally invited more than 20 of my friends to conduct an experiment by asking their Echo the exact same question: “Who is the Lord Jesus Christ?”

The results? Every single person said Alexa read them a Wikipedia entry for Jesus Christ. And if you ask, “Who is our Lord and Savior?” Alexa says some variation of, “Sorry, I don’t know that one.”

In fact, it’s pretty clear that Alexa (much like many atheists) isn’t a Jesus Mythicist. If you ask the Echo if Jesus Christ is a “mythical character,” Alexa will say (again quoting Wikipedia) that “virtually all New Testament scholars and Near East historians have been able to prove the existence of Jesus…”

So, again, Crowder is lying and riling up his fellow conservatives, while the rest of us watch on the sidelines wondering how people are falling for it.

This is testable stuff, people! If you don’t believe me, try it yourself, and leave your results in the comments. 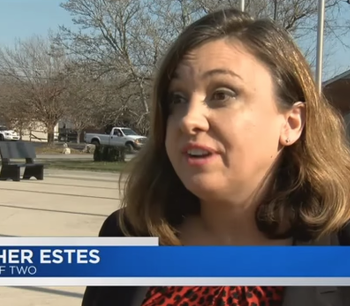 November 30, 2017
Kentucky Mother Says Her Kids Are Bullied at School for Not Being Christians
Next Post