On Christmas Day, Kevin Wesley posted a question on Facebook that you don’t always expect from a pastor: “What if the bible, is NOT the word of God?”

A day later, he made a video elaborating on that idea and effectively declaring himself an atheist*. 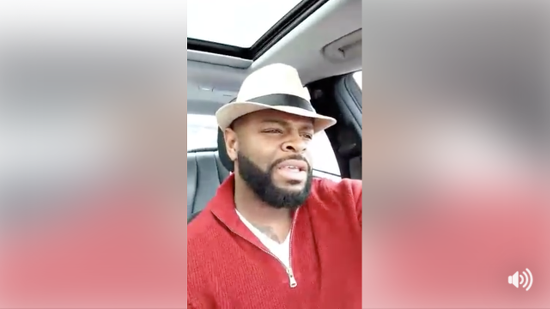 I put up a post yesterday on Facebook that said, “What if the Bible is not the word of God?” Needless to say, people were appalled by — disgusted even… I’m quoting them, okay?

But if I can do all these things, and you witnessed my sincerity while I was doing these things, don’t you think I must have came across something sincere? Something that’s so valid that it shook my belief, even when I didn’t want it to?

I tried. And it’s just not true. Okay?

So [there] comes a time in every man’s life when he has to make a choice. I understand there’s a lot of people who saw me be Christian, who saw me love Jesus, pray to Jesus, worship Jesus. I understand that. But to all of you people that I love dearly, I have to tell you: I am making a choice to stand on what I now know to be truth. And if you don’t wanna be my friend anymore, then you were never my friend to begin with…

Wesley then rattled off a brief list of why he doesn’t accept the Bible (or the characters in it) as true. Historical evidence, for example, doesn’t back up biblical stories. The fossil record doesn’t match up with what we’d expect from a recent global flood. There were civilizations and relics that existed long before the biblical “Adam” was ever created.

And then there was this:

Listen: There’s no way you’re gonna convince me that this God, that you believe in… is okay with slavery. There’s no way, when your Bible teaches you that slavery is okay, that what our ancestors went through is okay with God? Then I have a problem with that.

Listen: We’re being lied to. At some point, we have to use common sense, that the same people who stole us from our land, raped our ancestors, hung us… why would they give us a book that would benefit us, set us free? Why would they do that? They would not.

The implication is that the Bible is just another method of controlling black people.

Those are powerful (and controversial) words, and they clearly hit home with a lot of people. The Facebook video was seen by 65,000 people. A separate YouTube version of the video already has 300,000 views. And a comment thread on a popular website was well into the thousands.

Wesley said yesterday that it’s been quite a week, adding that he was “suspended from work.” It’s unclear if that’s because of his atheism, but that was certainly the implication.

I asked him a number of questions last night — when was he a pastor? Did he just realize he was an atheist last week? What sort of job did he have? — but I haven’t heard back as of this writing. If his story checks out, though, it’d be one of the more interesting ways I’ve ever seen someone come out as an atheist. He went from 0 to 60 in a hurry and he’s already dealing with the repercussions.

***Update***: In an interview Wesley gave on January 5, he said he wasn’t an atheist, but he no longer bought into organized religion (including Christianity). So while he would fall into the “None” camp, it’d be unfair to say he’s an atheist when he hasn’t rejected belief in God just yet. I’ve updated the post’s title to reflect that.

January 4, 2017
Why Religion and Morality Should Not Be Synonymous
Next Post