The Jehovah’s Witnesses Released an Awful Guide for Kids on How to Defend Anti-Gay Bigotry September 28, 2016 Hemant Mehta

The Watchtower Society has released a guide to help kids explain their stance on homosexuality to non-Jehovah’s Witnesses, and it has all the educational value of a biology textbook authored by Ken Ham.

The worksheet, titled “Explaining Your Beliefs About Homosexuality,” is remarkably disturbing for something only three pages long.

For example, how should you reply to friends who don’t think being gay is a big deal? The guide says that, before responding, kids should consider this:

Do you think the person you’re talking with feels that all Bible standards are outdated — including its prohibition of theft, adultery, and murder? 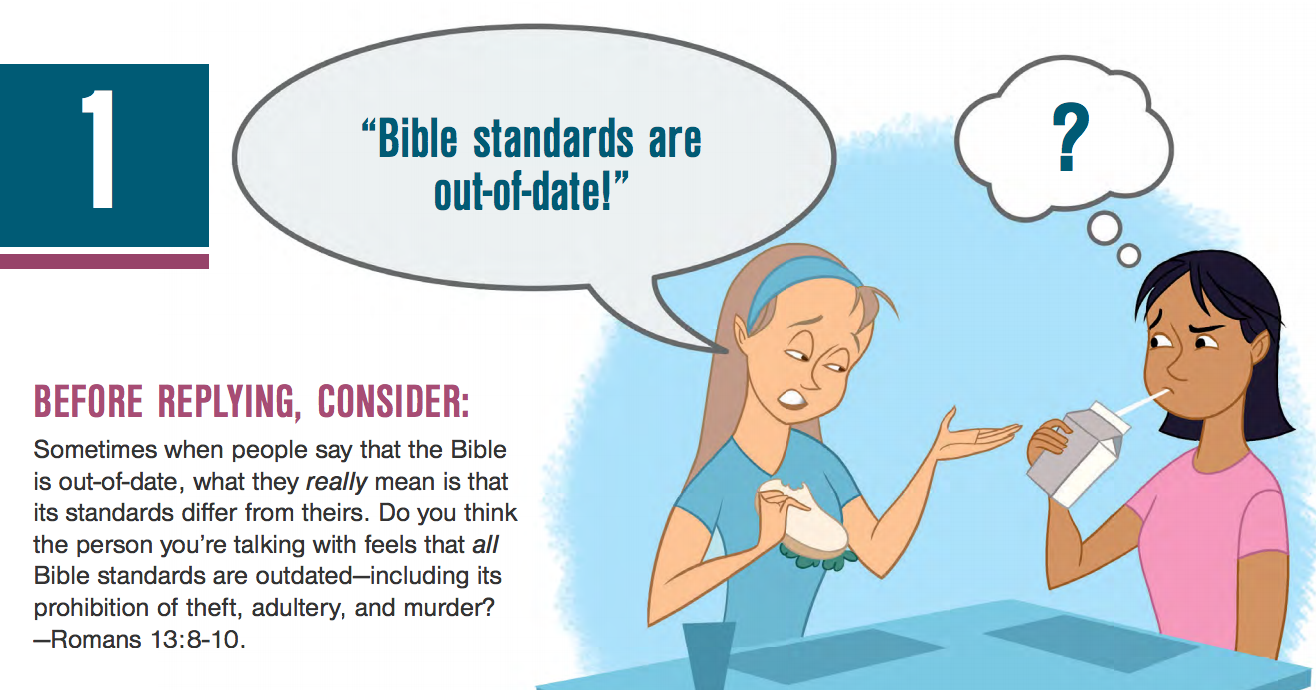 This is the problem with treating everything as a sin. Just because the Bible was wrong about this particular issue doesn’t mean it’s wrong about everything, and this insinuation that accepting homosexuality is akin to saying murder is okay is ludicrous. It’s the same slippery slope argument we hear from conservatives who think permitting gay marriage will lead to bestiality.

What about the argument that gay people were “born that way”? 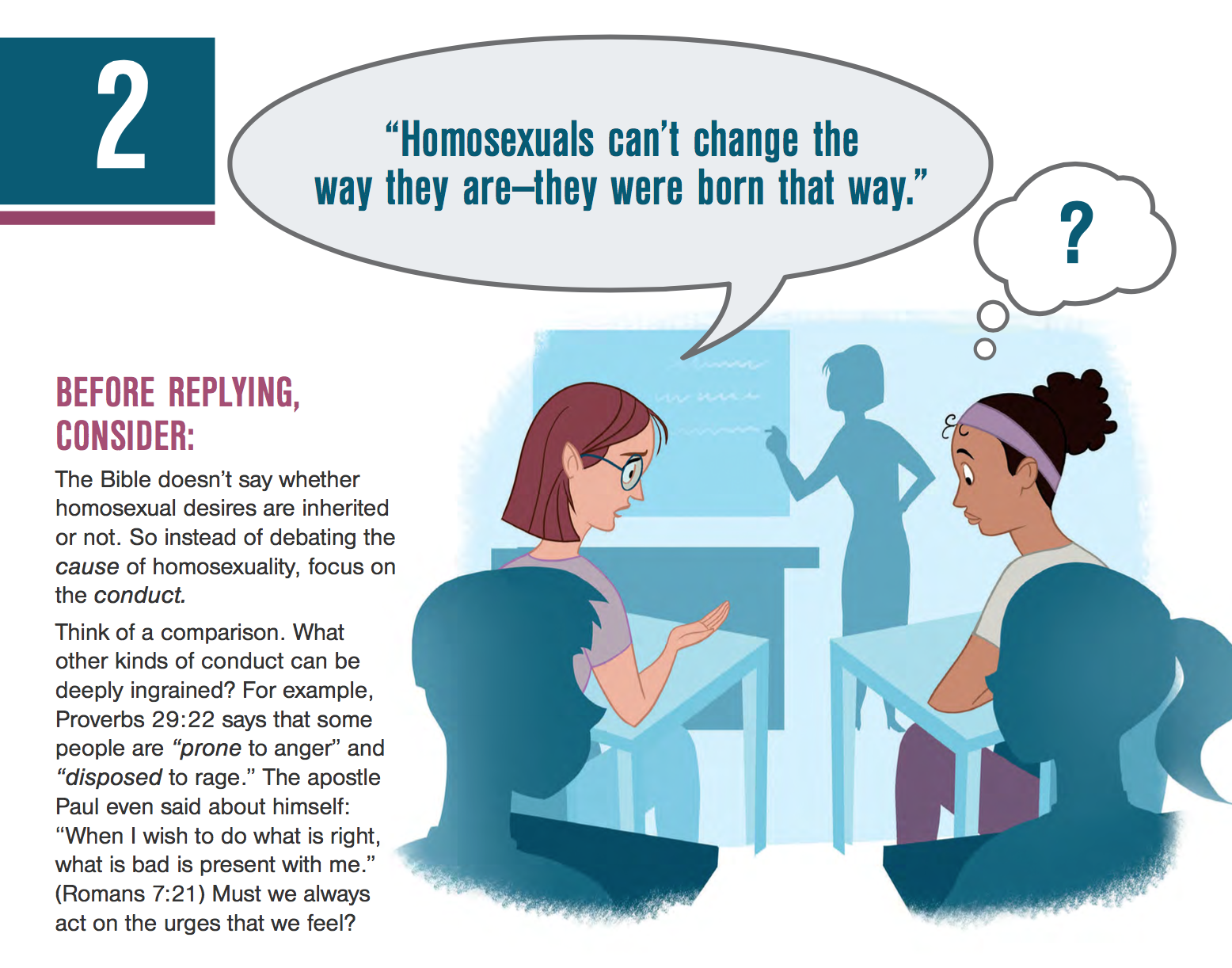 The Witnesses don’t take a stance on that, but they immediately jump to other problems people may be born with.

For example, Proverbs 29:22 says that some people are “prone to anger” and “disposed to rage”… Must we always act on the urges that we feel?

Ah, yes… the old “being gay is like being an alcoholic” trick.

Needless to say, alcoholism, anger, and rage are actual problems. They hurt the person with the affliction and the people around them. The problems can be managed and tamed. They can be overcome.

Being gay isn’t a problem. It doesn’t need a cure. It doesn’t hurt anyone. And it’s downright cruel to suggest that people shut down their sexual urges for life just because they are gay or lesbian.

Finally, the guide explains how to respond to someone who says you should change your anti-gay stance. 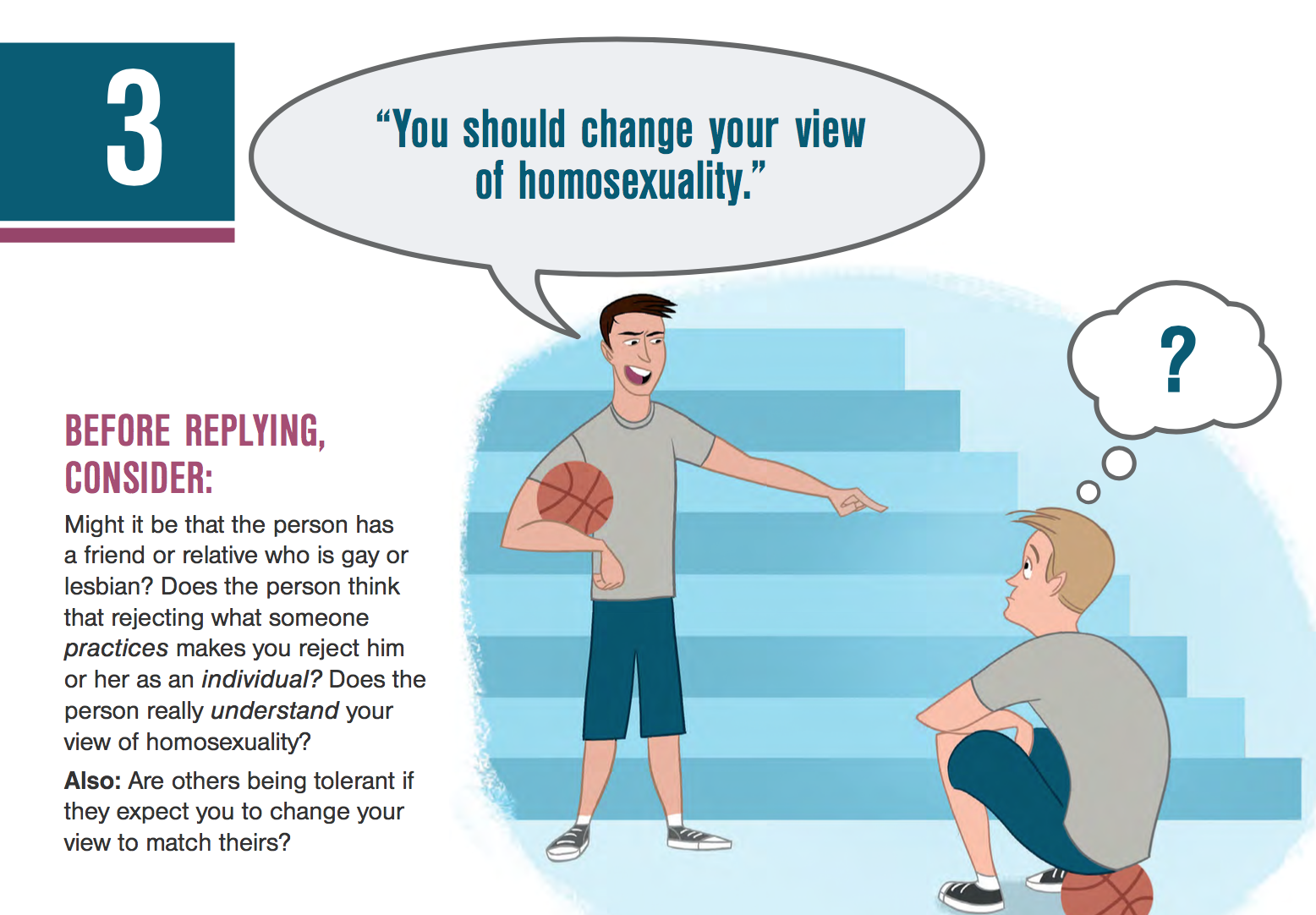 After suggesting those critics just don’t understand your position, the Witnesses ask:

Are others being tolerant if they expect you to change your view to match theirs?

In other words, those critics are just being intolerant of your intolerance. How dare those bigots try to stop your bigotry!

What a horrible guide. Any young person who has to read it would be better served ripping it up than writing in it. Those of us who have dealt with evangelicals who hold a similar stance have gotten used to responding to these tired attempts at defending an indefensible position.

It’s obvious the entire guide was written by someone who has never actually had these conversations.

Lloyd Evans has an excellent rant about the entire worksheet right here:

September 28, 2016
Despite Legal Euthanasia, Canadian Catholic Doctors Did Nothing as an Old Man Suffered
Next Post