More than a month ago, we posted about Marcus Rogers, a person who spouts biblical gibberish on Facebook and makes Joshua-Feuerstein-style vertical videos on YouTube. He had big plans to spread the Gospel throughout the world, a feat which he said required some cash. And that’s why he launched a GoFundMe campaign for $455,000.

Where that money was going, however, no one knew… 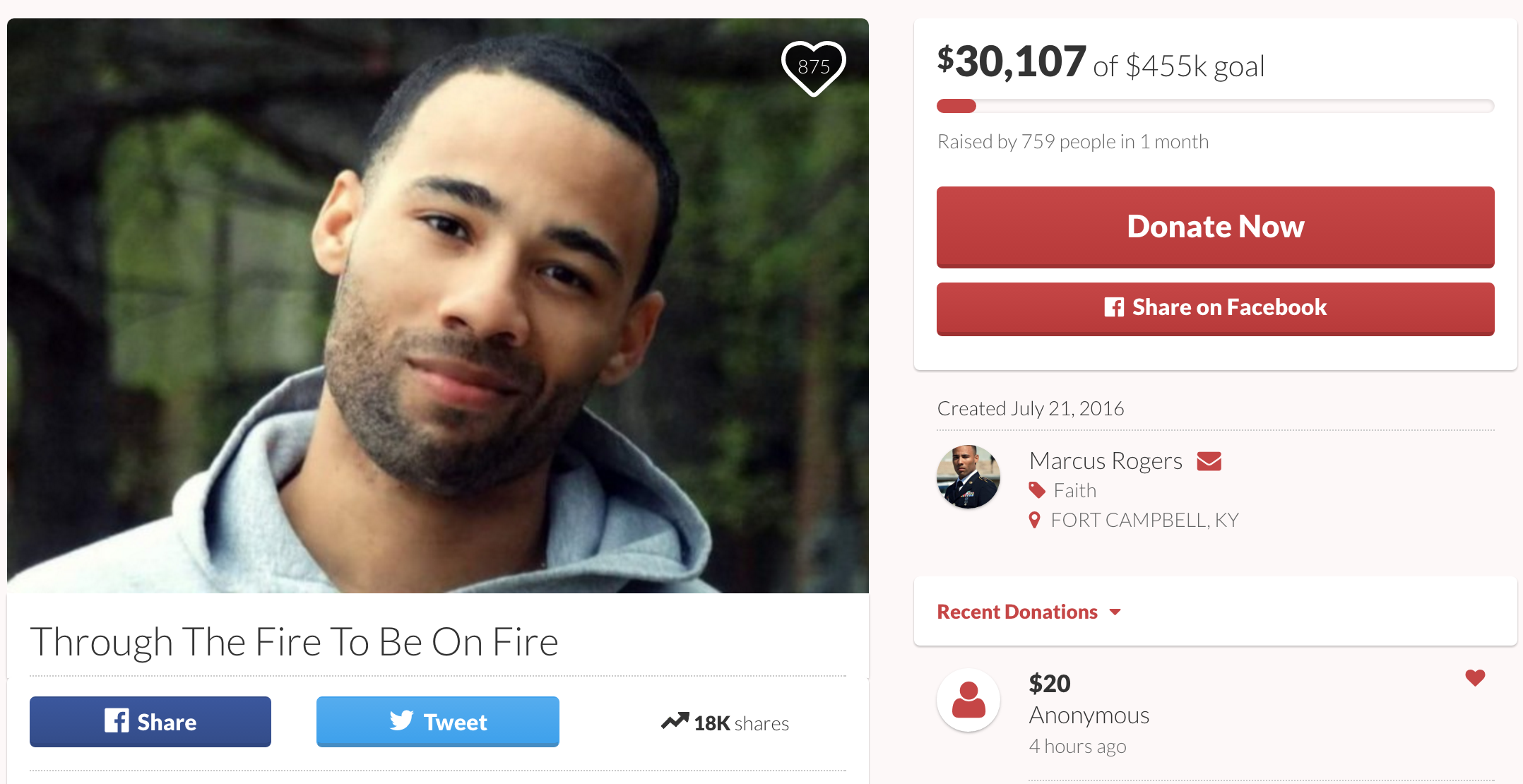 I just want to reach this world with the love and truth of Jesus Christ. I feel like if I am not doing that to my full potential I might as well be dead. I know the vision that I had, and God told me to prepare the way for His return with Holy Ghost Fire. It is time for me to expand beyond Facebook and Youtube. God told me the other day that darkness would hit this earth, but the fire of revival would burn through the night. I want to go around this world and encourage, motivate, inspire, heal in Jesus name and do whatever I can for the Kingdom of God. I am not ashamed of Jesus. I am not scared to stand for truth. I am willing to go from church to church. I am willing to hit the streets. I am willing to do tent revivals. All I know is that when two or three or gathered in His name Jesus will be in the midst. I have big dreams, but I can not do it on my own. I humbly ask for help and prayers. I promise you whatever seed you plant will go into spreading this gospel to the world. I want this more than I want to breath. I am going to give God everything I have. I am ready to live and die for this truth. If you will help me, I will go out and rock this world for Jesus. I will set this world on fire through the power of Jesus Christ. I will be bold. I will be loud. I will be unashamed even if it cost me my life, my image, or anything else. I want God to look down at me and smile. I want Him to know that I gave everything I got for His glory. I did everything I could to reach as many souls as I could before my time is up. I promise I won’t sell out by the grace of God. I want to inject this world with the truth of God with everything I have until the day Jesus calls me home. I love Jesus. I love His people. I love souls…..Souls are the heartbeat of God. I just want to be the hands, the feet, and a mouthpiece for God to speak through in these last days. If you choose to bless this ministry, I pray that God blessed you right back ten times over as a sign to you that you made a investment in His work that He has ordained and blessed. I love you all. Be encouraged in Jesus name.

There was a video, too:

It was the same pitch that televangelists often make: Give me money, you’ll be rewarded many times over for your generosity, and I’m not going to tell you anything more.

And yet he raised more than $30,000 since starting his fundraiser.

As this was going on, Rogers was also under investigation by the U.S. military for baptizing someone at a military base even though he wasn’t a chaplain (and therefore not authorized to perform those actions). It didn’t help matters when the person he baptized, Army Specialist Dhaifal Ali, drowned shortly after the ritual took place.

I don’t know if this is a coincidence or a consequence of that investigation, but Rogers’ GoFundMe campaign (which had no expiration date) is now coming to an end. He made the announcement yesterday:

I will be shutting this page down. I have a great idea to continue to grow. I see so many negative comments from people who claim to have a relationship with God, funny thing is if they really did they wouldn’t stress about it so much because they know God is just and everybody will have to answer to Him for everything we do. God bless you guys. I get more good feedback then bad. I have done nothing but grow the more people talk about me. The bottom line is some of you can’t understand and you wish you could understand what me and God have…but sorry you have your own walk. Love you guys 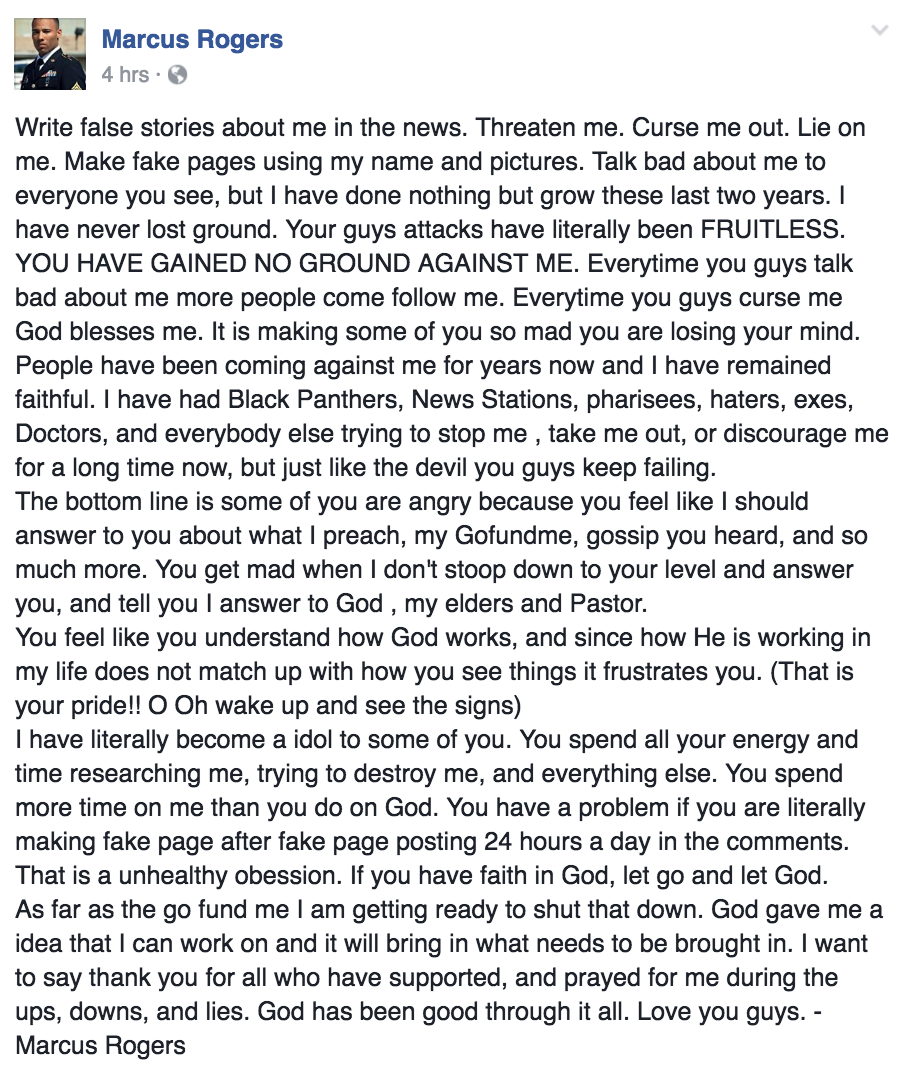 Write false stories about me in the news. Threaten me. Curse me out. Lie on me. Make fake pages using my name and pictures. Talk bad about me to everyone you see, but I have done nothing but grow these last two years. I have never lost ground. Your guys attacks have literally been FRUITLESS. YOU HAVE GAINED NO GROUND AGAINST ME…

The bottom line is some of you are angry because you feel like I should answer to you about what I preach, my Gofundme, gossip you heard, and so much more. You get mad when I don’t stoop down to your level and answer you, and tell you I answer to God , my elders and Pastor.

Got that, everyone? We’re the bullies for asking how he’s going to spend his money. He doesn’t have to explain anything.

This response to a commenter was even more telling:

If I blew it all on candy that would be between me and God and He would deal with me. I am sorry if that makes you upset, but I dont have to explain anything to you. Love you though;)

That’s a pretty horrible way to justify all the money you raised to honor God.

He didn’t say when he would end the fundraiser, so there’s no telling how much time is left for gullible fools to hand over their money. It’s possible he’s just bluffing publicly, hoping others will continue to donate.

When it’s all said and done, though, he’ll get to pocket the $30,000 and erase the entire page (which I made sure to archive).

Where’s Megareverend John Oliver when you need him?

(Thanks to Evan for the link. Large portions of this article were posted earlier)

September 13, 2016
Football Announcer Who Said Anthem Protesters Should Be Shot Resigns, But Says He Was Misquoted
Next Post