This is a guest post written by Lucien Greaves. He’s the spokesperson for The Satanic Temple. 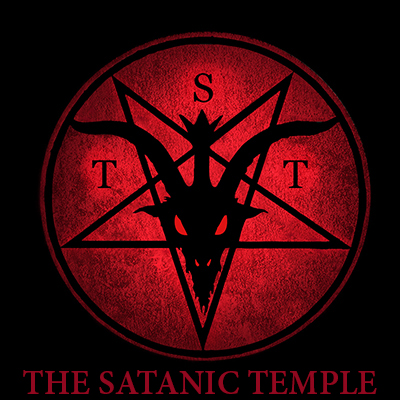 Tonight, the City Council of Phoenix, AZ convened to consider proposed measures aimed specifically at blocking The Satanic Temple from delivering any invocations in the “open forum” of their Council Chambers.

Media reporting was often scattered and unclear regarding how, exactly, the Council intended to block the Satanic invocation but indications were that certain Council members advocated for a rotating roster of Council-approved clergy. Clearly, the idea presented a fundamental misunderstanding of First Amendment freedoms and the government’s inability to act as arbiter of “legitimate” religious expression.

Tonight’s meeting began with three-minute public comments, which were kicked off by a citizen-veteran speaking desperately in defense of pluralism and free speech, followed by a tired and unconvincing Christian reading from the Book of Isaiah asserting that there is a Constitution “higher than the United States Constitution.” A fiery older lady then took the podium to declare that “Satanism is a not a religion; it’s a cult,” without ever defining either one. The Mayor interjected to insist that all testimony regarding the invocation controversy be withheld till the Council reached that particular item on the agenda.

The Mayor noted the large public turnout several times, and he seemed surprised at the number of people outside of the chambers still clamoring to get in half an hour into the meeting. Clearly, The Satanic Temple’s invocation was the contentious topic that spurred this newfound sense of local civic engagement.

After belaboring the other “agendized items,” the Council begrudgingly came back to the question of invocations. They considered either changing the prayer policy to allow only for Phoenix residents and approved “chaplains” to speak or to revert to a moment of silence. Naturally, a number of citizens had submitted to speak on the issue.

Zenaido Quintana, Chair of the Board for the Secular Coalition for Arizona, spoke on behalf of secular pluralism, as did Dianne Post of the Freedom From Religion Foundation, who holds the distinction of having delivered an atheist invocation at the opening of a prior Phoenix City Council meeting. Their message was clear: either the public forum had to be open to everyone or it needed to be shut down.

A representative of the Arizona State Legislature, with a letter signed by 20 of his peers, testified that a discriminatory prayer policy must, by God, be instated to preserve the sanctity of their great State.

No members of The Satanic Temple spoke, and it was unclear whether or not the baffled Council members who opposed our right to give an invocation would agree we could approach the Council to speak on our own behalf.

Yesterday, I wrote a statement pointing out that the City Council’s deliberation upon the issue could only result in one of three possible outcomes:

Lucien’s Law states that options one and three were the most likely choices.

Any one of the options, I asserted, suited us just fine. The Law is the Law, and there is no confusion amongst those of us with a basic understanding of the Constitution as to what the Law says. However the City of Phoenix came around to handling the Law, it was going to end up fitting our interpretation of it — the question was whether we’d have to make a detour through the courts. For that reason, we were victorious in Phoenix before today’s Council meeting ever began.

As I elaborated, “we’re neither fighting solely for our presence in the public square, nor are we fighting to have public religious forums shut down… What we’re fighting against is a situation in which one religious voice assumes a place of privilege with Government sanction.”

One Council member, Sal DiCiccio, felt that he knew our intentions better than we did, saying in a statement earlier today, “The goal of the satanic group has always been to ban all prayer. If the Mayor and Council were to give into [sic] the satanists; then they would be granting them their wish.”

Leaving aside the issue of DiCiccio’s arrogance in assuming he could speak to our intentions, even thought he completely missed the mark, consider also the brazen pettiness of a public official whose first consideration, in a question of legal importance, was an outright refusal to consider his chosen enemy’s proposals. And not because it was the least preferable, productive, or legally sound proposition, but rather because accepting any of our suggestions would hand us a victory that he couldn’t bear. This is not how an adult who represents the citizens should be acting.

DiCiccio also lacked the basic tact and legal savvy to pursue his clearly unconstitutional agenda in any plausible way. He didn’t bother framing this in a legally appropriate way. Instead, he took to Twitter and boasted about how he was working furiously to block The Satanic Temple from delivering invocations.

Politically correct PHX politicians pushing SATANIC PRAYER about to get pushed back. I move to block Satanic prayer https://t.co/P7XjfOzjxI

Councilman Jim Waring had been quoted in the press saying that he wanted to take us to Court rather than allow us to exercise our freedom of speech, “even in the face of almost certain defeat.”

As I commented at the time, “[Waring is] willing to take us to Court, even if facing certain defeat. This indicates that he realizes that the law is not on his side, but he’s willing to fight a legal battle, at taxpayer expense, in hopes of unconstitutionally privileging certain types of religious expression in the public forum over others.”

Councilwoman Thelda Williams motioned to have the invocations replaced with a moment of silence to precede Council meetings. Representative Kelly Townsend, who has organized a “Prayer Rally” against us, claimed that a moment of silence would silence Christian voices unfairly (though silencing The Satanic Temple was somehow entirely acceptable to her). One citizen cited the fact that “under God” was weaseled into the Pledge of Allegiance as evidence that the government can indeed engage in viewpoint discrimination, while another cited “In God We Trust” printed on currency. The Satanic Temple was continuously disparaged as a “cult” (a convenient pejorative), and a self-identified veteran called Satanists a domestic threat.

Ironically, a woman opposed to our prayer argued against the moment of silence on the grounds that people needed to have the courage to hear that which offends them!

We were later called a misogynistic “hate group who promotes violence against women,” because Michelle Shortt, who would deliver our invocation, is a model whose public professional pictures are altogether too sexual for the puritanical sensibilities of some. My “desecration” of the grave of the mother of Fred Phelps (in an anti-Westboro Baptist Church demonstration) was invoked as evidence of my hateful and sinister criminality. I was accused of having slurred Jews because of my criticisms of Orthodox Jewish religious superstitious practices in a 15-year-old podcast (where I clearly said then that it’s okay to criticize a “faith” but not an ethnicity). I was slandered as a racist hate-monger for interviews in which I actually offered a counterpoint against racist hate-mongers (supposedly for engaging in the dialogue at all).

As my own reputation continued to be slandered, my phone began buzzing with outraged texts from The Satanic Temple members personally stung by the ludicrous claims they were hearing about online. The woman offering this testimony was clearly, clearly coached and openly prodded by Council members.

There were ultimatums declared by self-appointed “representatives of Jesus Christ.” Superstitious fury clouded the majority of public statements. Tears were shed for “the One True God.” The Council Chambers took on the atmosphere of an old school revival tent as Jesus’ name was shouted from the podium incessantly to the members of the City Council and the heavens above. Our being allowed to give an invocation was compared to allowing one”s own children to play with El Chapo or Jack the Ripper.

Even we didn’t expect this level of hysteria.

It was absolutely medieval. The whole thing was terribly depressing. The unending line of Christian representatives was tedious and aggravating.

We kept hearing the idea that it was The Satanic Temple trying to muzzle free speech when the truth is that we merely wanted to engage in it.

At least there were some speakers on our side. One dared to ask “which God” the Council defended to the exclusion of all others. A Vietnam veteran received applause for his status as a vet, but silenced the enthusiasm by speaking in defense of secularism. A veteran of the Iraq War asserted that he didn’t “need a middleman between” himself and God — he was for a the moment of silence. A representative of the Universal Life Church cited Matthew 6:6, admonishing public prayer, reminding the Council that the city is not in the business of running a church. A man speaking for Phoenix’s Human Rights Commission tried to remind everybody that Satanic beliefs are irrelevant to the issue of our Constitutional Rights.

After everyone had finished up at the podium, the city’s attorney advised the Council that if they voted to block The Satanic Temple from speaking, the city would likely lose a lawsuit against us. He also advised them not to apply new rules retroactively blocking our scheduled invocation later this month, even if they adopted discriminatory policies in the future. Council member Waring berated the attorney for changing his argument from whatever he had said during their closed executive session, as well as “giving away” the City’s legal strategy: “People in Kabul could be listening to this on the internet!” he said. (He neglected to think about the Satanists who might reference his comments in court.)

DiCiccio accused the attorney of “rigging” the hearing. Apparently, conspiracies are often afoot in Phoenix, and DiCiccio saw it coming. He vowed to round up a mob of public outrage should the vote not go his way and a moment of silence be instituted. He’ll appeal to churches, he said, and demand a vote. (However that would work.)

After DiCiccio’s temper tantrum, Waring pointed out that he didn’t think anybody on the Council was secretly a Satanist, though he did seem to feel that there were some dark forces silently working against prayer.

Council member Kate Gallego pointed out — as I have — that the Council members who were attempting to block us from speaking put the City in a situation where it may owe “wheelbarrows of cash” to The Satanic Temple if discrimination became public policy.

The Mayor asserted that he was a man of faith but did everything he could to say the city simply could not discriminate. He openly and amazingly berated an unnamed “member of Council” who engaged in crass political attacks against other members of the Council regarding this issue. Referring to the behavior as “despicable” he couldn’t contain his open disgust. It was surreal.

DiCiccio was later deemed “out of order” after sputtering that it was now time for “the public to take this into its own hands,” whatever that means.

Council member Laura Pastor was reduced to tears at seeing the Council so angrily divided — and at the dawning realization that The Satanic Temple might give an invocation after all.

Councilman Michael Nowakowski further slandered us as a “hate group” and made some mention about TST creating a “book of rape.” Which I’ve never seen before. Who knows what he was referencing? Was this in regards to modeling photos again, the materials of some other self-identified Satanist group, or something entirely invented?

Ultimately, the motion to instate a moment of silence passed on a 5-4 vote. According to DiCicco, it was a “big win” for Satanists.

Thank you, Sal. We’ll take it.

February 3, 2016
Please Support the Work I Do Through This Site
Next Post