After Pastor Creflo Dollar begged his congregation for money so he could buy a $65 million plane, it’s worth asking: why do some Christian preachers need private jets?

Kenneth Copeland and Jesse Duplantis answered that question on the Believers Voice of Victory show Tuesday.

It started with Duplantis talking about how God spoke to him during a private flight and said he was letting his faith stagnate. Duplantis, shocked at the charge, said he unbuckled his belt and stood up to talk to God about this.

But before he could tell the rest of that story, Copeland chimed in: 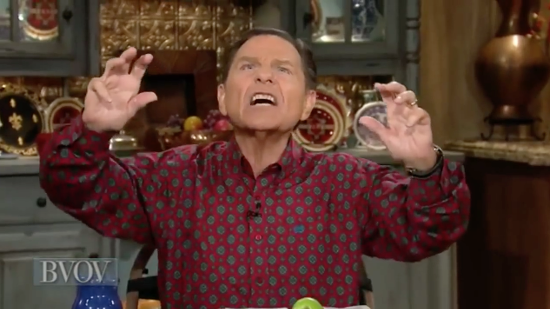 May I interrupt you there for a sec? You couldn’t have done that on an airliner. Stand up and say “What’d you say, Lord? Okay? No? Yeah?” And the guy sitting over there, saying, “What the hell does he think he’s doing?” You can’t do that! No, no…

This is so important!

And those of you that are just now coming into these things, in the first place — Jesse and I and others, Keith Moore, and Creflo, and all of them — the world is in such a shape, we can’t get there without this. We’ve got to have this. We would have–

The mess that the airlines are in today, I would have to stop — I’m being very conservative — at least 75 to 80, more like 90% of what we’re doing ’cause you can’t get there from here.

That’s why we’re on that airplane. We can talk to God. When I was flying for Oral Roberts, Brother [unintelligible], my boss, on the airplane, he said, “Now Kenneth, this is sanctuary. It protects the anointing on Brother Roberts.” And he said, “You keep your mouth shut. Don’t talk to him unless he talks, because when he’s on a meeting, he doesn’t talk to anybody but God.”

Now Oral used to fly airlines. But, even back then, it got to the place where it was agitating his spiritual, people coming up to him, he had become famous… you can’t manage that today, this dope-filled world, and get in a long tube with a bunch of demons, and it’s deadly…

Yeah! Gotta avoid those unsaved demons when you’re flying to a place to save people from demons!…

Duplantis agreed, of course, saying that his schedule was so hectic that it necessitated a personal plane.

Here’s an idea: If you’re so famous that you can’t fly everywhere without people stopping you, wear a disguise. Or fly First Class if you must. Or don’t stand up to talk to God like a crazy person when I’m sure God can read your mind just fine even if you’re seated and silent.

And if you have too many places to go in too little time, maybe flying isn’t the solution. Just pool your money together with all the other rich pastors and invest in a scheduler who can find the closest Man of God for a particular event. Not all of you have to be criss-crossing the world every day. Just hire a few guys in Africa and save yourselves the trouble.

But that’s a logical approach to an illogical problem. These guys get off on money. Don’t you dare tell them to use their millions to buy food, clothing, or shelter for those less fortunate. They think they’re helping by buying a plane, flying to wherever the poor are, and telling them about Jesus.

(via Pulpit & Pen and Museum of Idolatry)

December 31, 2015
"Axial Tilt is the Reason for the Season" Billboard Generates (Fake) Controversy in Colorado
Next Post

December 31, 2015 Christian Bakers Who Raised $515,000 Online Are Somehow Broke After Paying $137,000 Fine
Browse Our Archives
What Are Your Thoughts?leave a comment