A Former Christian Covers the Messed Up Song “I Wish We’d All Been Ready” October 24, 2015 Hemant Mehta

In 1969, one of the original Christian rock musicians, Larry Norman, released a song all about the upcoming rapture called “I Wish We’d All Been Ready.” While many artists have covered the song, few people have really dissected the incredibly messed up lyrics and ideas contained in it. 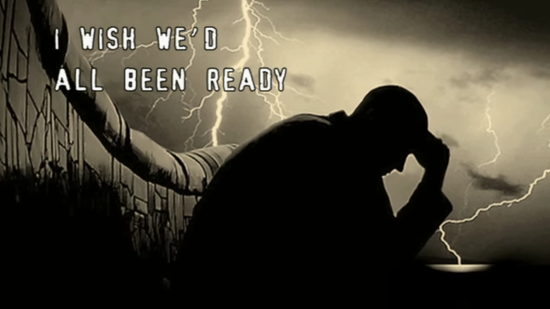 In 1979, he saw the Christian film A Thief in the Night, which featured the song. He told me it “lodged itself in my brain and haunted me for years.”

Growing up as a kid raised in a Baptist church, there were so many things that were off limits: No rock music; no movies with swears, or violence, or any hint of sex; no TV shows that exhibited ‘worldly’ behavior. But at church, it was perfectly normal and acceptable for End Times scare films like A Thief in the Night and If Footmen Tire You, What Will Horses Do? to be screened for congregations of all ages, movies where children were gruesomely tortured and beheadings were commonplace. It was confusing and frightening, and created a huge cognitive disconnect for me.

So he decided to create a band of his own — the Christian Nightmares Tribulation Band — for the sole purpose of covering that single song. He also made a music video showing just how horrifying the lyrics really are.

It’s NSFW because the original song is just that fucked up.

Jesus… I knew the recent Left Behind film was bad, but I didn’t realize it was the sanitized version of what Christians were singing about decades ago.