Sometimes, Estimating is Better Than Getting the Exact Answer October 22, 2015 Hemant Mehta

Sometimes, Estimating is Better Than Getting the Exact Answer

People ask me why I keep writing posts about math. Mainly, it’s because I care about critical thinking, and I want students to learn how to think logically. That’s a skill most of us didn’t learn how to do at a young age. And that’s why, when it comes to math, so many people flip out when they see a problem done “the wrong way.” They just assume they know better. Any deviation from traditional methods is heresy.

It’s frustrating for me because I know what the teachers are trying to do, but it’s not always obvious to the parents whose first reaction is to complain on Facebook.

Take this problem that has been shared more than 20,000 times on Facebook since last week: 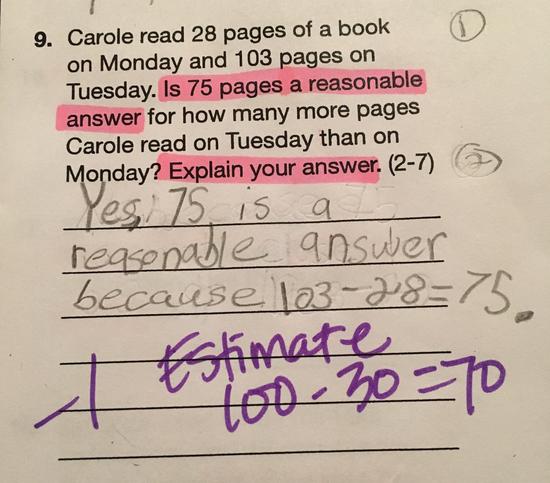 The setup basically says: A girl read 28 pages one day and 103 the next. Is it reasonable to think she read 75 more pages the second day?

That made no sense to the parent who posted about it:

I’m back. Because I just CAN’T. I can’t not say anything. I can’t not call out the complete insanity of this Common Core Math. Please explain to me in what CRAZY, BACKWARDS, MAKE BELIEVE WORLD this makes sense??

In this scary world of FAKE MATH, 75 is not the correct answer?! In order for the answer to be REASONABLE, my daughter needs to estimate and come up with the WRONG answer?!?!

Yes! That’s exactly what she needs to do. It’s more important that the girl estimates and gets close than it is for her to do the problem and get it right.

Because estimation is an important skill to learn. (Maybe not in this exact situation, but in general.)

If all you have is $20 in your wallet, is that enough to pay for the items?

It would take you at least a little bit of time to add up those numbers individually and get an exact number. Would it answer your question? Absolutely. But you don’t need an exact answer.

Why is that better? Because the exact amount doesn’t really make a difference. You just need to be close enough.

Going back to the problem on Facebook, look at what the question says: “Is 75 pages a reasonable answer for how many more pages Carole read on Tuesday than on Monday?”

“Reasonable” is the key word there. The question implies: Don’t actually do this problem. Just get in the ballpark.

So when the student solved it, she essentially told the teacher that she doesn’t understand the skill she’s being tested on. The teacher was right to take a point off.

To be fair, I don’t really like this question. These are small enough numbers that most people would do what the student did and get an exact answer. If I were writing it, I wouldn’t have made the pages exactly 75 apart.

But here’s the point: We teach estimation with small numbers so that students can eventually use the skill with bigger numbers.

The parent doesn’t understand that. She blames the teacher and “Common Core” and “Fake Math”… and never once thinks, “Maybe my child did something wrong here.” That’s what’s really bothers me. Her child may know how to subtract, which is great, but she might not be able to estimate. And shouldn’t kids be able to do both, depending on the situation?

You can complain about the problem all you want, but the teacher was asking a different question than the one the student answered.

Going back to the parent’s complaint:

This math belongs in the world of unicorns and leprechauns. Not in the real world…where numbers matter!

Home school is NOT the answer for me. But a change in our education system is absolutely necessary. We cannot build a future on this kind of thinking. Please share this post if you agree!

Doctors giving medication will need accurate information, no doubt, but doctors estimate things all the time. Hell, my wife’s doctor estimated our baby’s due date and told us “it should be born around then.” They also estimate how long procedures will take or how much equipment they’ll need. Then they adjust those answers based on new information.

You can get plenty of traction out of imperfect data.

Once again, this parent and all the people who are sharing the image online have no clue what they’re whining about. But instead of getting all the information, they revel in their ignorance. They just assume the problem lies beyond them.

If that parent is listening, here’s a piece of advice: Talk to the teacher before posting images like this on the Internet. When you don’t, you end up looking foolish.