***Update***: The news clip was staged. Bowser “edited himself into the real newscast.” Still funny, though! Just a little too funny to be true. — Hemant

Last month, during the Satanic Temple’s unveiling of a Baphomet statue in Detroit, local news station WDIV interviewed Andrew Bowser, a man who is indisputably Satan’s most enthusiastic worshipper.

The interviewer must have been holding the microphone at a safe distance while Andrew shifted through the dark and poetic testament of his dedication. The theatrical tangent that began as a tribute to Baphomet soon turned into an indirect confession of stealing his neighbor’s lingerie catalog for, shall we say, secret personal uses. 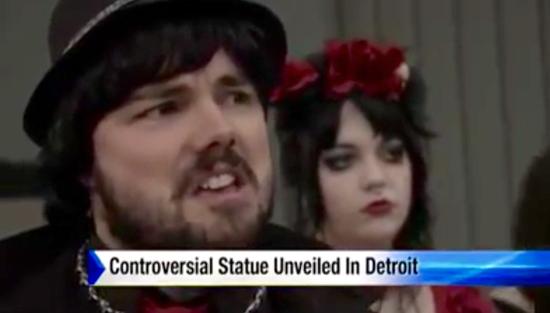 I’m just excited to see my Lord and Savior, Baphomet, represented in such glorious Italian stone. I do hope his eyes gaze upon me and that my allegiance is recognized.

Notice me, Senpai, notice me.

[After the interviewer describes a statue of an angel crushing the devil, which was brought by religious protesters:]

Part of me wishes that angel statue would come to life, and King Baphomet would rise, and two eternal juggernauts would do battle right here in the middle of the city. But for what is this battle raging, you ask? I dunno. What stands at the center? To that I say: My soul is at the center, offered up to the ageless ones, only to be torn in twain.

It’s like you can’t have one without the other, ya know? Like I’m equal parts God and the devil. A cloak of shame covers this man, and only supreme light will wash my body clean. But how could that light possibly reach me with the thick clouds of indecency that surround my poor soul? So I carry my wrongdoings on my back like some kind of tormented hiker lost in the hills of misfortune, looking desperately for that peak to rescue him from the valley of depraved habitual self-pleasuring.

But again, I find nothing, except for sweaty devastated loneliness, and a thousand judging eyes staring back at me from the cover of a stolen Victoria’s Secret catalog: “I didn’t take your mail, Mrs. Pemberton. Stop asking me that. Leave me alone!”

I’m not sure if it brings me comfort or disappointment to discover that Bowser is an actor who is well known in nerd culture for an interview he did with a similar demeanor for GameSmash.com several years ago.

According to his Wikipedia page, Bowser has a pretty extensive history as an actor, writer, and director.

The best part, especially since it was a joke, is that a lot of aging Detroit conservatives watching the local news that night felt a haunting chill, finally receiving the confirmation they were looking for in the days of Satanic Panic, that exuberant lovers of Satan live among them.

August 28, 2015
Christian Pastor: A Woman Gave Me Money and Her Baby's Brain Tumors Disappeared
Next Post

August 28, 2015 A Substitute Teacher in West Virginia Wants to Wear Priestly Garments in the Classroom
Browse Our Archives
What Are Your Thoughts?leave a comment