After a multi-year hiatus, Macklemore & Ryan Lewis just released a new track: “Growing Up (Sloane’s Song).” Macklemore says the lyrics function as advice to his newborn daughter as well as himself. 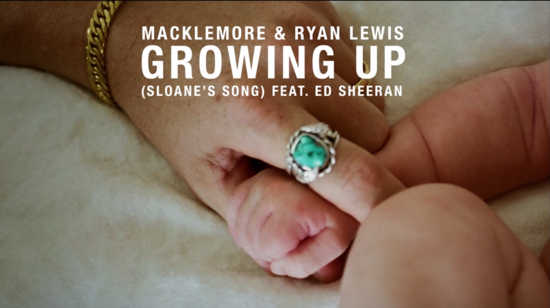 The song includes lines such as: “I recommend that you read The Alchemist, listen to your teachers, but cheat in calculus / Tell the truth regardless of the consequence, and every day give your mama a compliment.” Cute, clever, honest, nice. (Except for the cheating in calculus. Never do that. #FormerMathTeacher)

But then there’s this:

Do yoga, learn about karma / Find God, but leave the dogma

At first, that threw me off. The last thing I want to hear is a popular artist telling people to put their faith in something that doesn’t exist. But, honestly, if leaving the dogma means saying goodbye to organized religion, more power to him.

It’s not the first time he’s referenced faith in his music, and every time, he’s tempered his praise of God with a slam on God’s followers.

This is the same rapper, after all, who said in “Same Love” (a song addressing homosexuality):

Playing God, aw nah here we go
America the brave still fears what we don’t know
And “God loves all his children” is somehow forgotten
But we paraphrase a book written thirty-five-hundred years ago

If they included him in those demographic surveys, based solely on what he’s said through his music, Macklemore would be a “None.” He’s spiritual but not religious. He believes in a higher power but harbors disdain for churches.

It’s the sort of belief that atheists almost have to support, not because it’s based on evidence, but because the alternative is so much worse. And if one of the most popular acts in music can encourage Christians to rethink their faith — it’s happened before — then we have little to complain about.

Keep in mind that, a couple of years ago, Macklemore made a promotional ad in support of church/state separation:

And that’s why I am one of the voices united for separation of church and state.

So we don’t agree on the God bit, but he’s arguably helping atheists by reminding his audience how awful organized religion can be. If his version of faith involves treating others with kindness no matter what, his belief in a Higher Power becomes virtually irrelevant.

August 5, 2015
What the Mormon Church's "Seer Stone" Photos Tell Us About Prophet Joseph Smith
Next Post

August 5, 2015 At Business Conference, Speaker Says "If You're an Atheist, You're Stupid" as Camera Rolls
Browse Our Archives
What Are Your Thoughts?leave a comment