A Jehovah’s Witness named Isaac recently criticized the Church’s teachings — an unforgivable sin — resulting in what’s known as an “Apostasy Trial.” (That’s not the official name of it, but same idea.) He basically had to go in front of a couple of Elders and explain himself. They would ultimately decide whether he gets to remain in the Church or be banished for good.

Isaac managed to secretly videotape the entire proceeding, giving us an inside glimpse into how the religion’s judicial process works.

Keep in mind that, due to “disfellowshipping,” if Isaac is found “guilty” of apostasy by the committee, most of his friends and family members (all of whom are still part of the Church) will never speak to him again.

Isaac understands that. He’s accepted that. And he’s still ready to leave the Church… but not before he goes through the trial just so we can all see what it’s like. 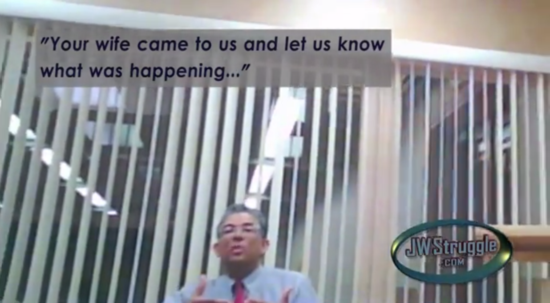 According to the video description:

This two-hour meeting revolves around a man named Isaac. His so-called sin is speaking out about the flaws and contradictions he has discovered through studious research into the religion of his birth. He is summoned to stand before a puritanical committee of three JW clergymen, without representation and without friends or witnesses to speak up in his behalf.

The Watchtower Corporation that controls this pseudo-religion does not want a stenographer, nor a camera, nor any other witnesses to this kangaroo court proceeding. They want no public record of what goes on. These three men act as judge, jury, and executioner and hold his “everlasting life” in their hands. If found guilty, then he will be spiritually executed and stoned for his “disobedient, rebellious acts” against the Watchtower organization’s strict dogma.

Here’s just one example of the airing of grievances: Around 14:15, Isaac brings up the scientist who was misquoted in a recent JW publication as an example of a typical problem he’s seeing with the Church. Leaders spread lies with no attempt at correcting them even when the truth is staring them right in the face.

There’s no response to that from the Elders.

This is only part 1 of the video. There’s more coming. But the way the Church leaders rationalize Isaac’s very legitimate concerns is disturbing — and all the more reason for others to stop following JW teachings and leave this religion altogether.

I’ve often linked to John Cedars, who writes about Jehovah’s Witnesses on his website. He, too, faced an Apostasy Trial in 2013, was found guilty, and then got disfellowshipped. He wrote about it here and made a video before and after his “hearing.”