Earlier this month, I posted a video of Christian Pastor Perry Noble seemingly saying the word “Nigga” during a Christmas Eve sermon: 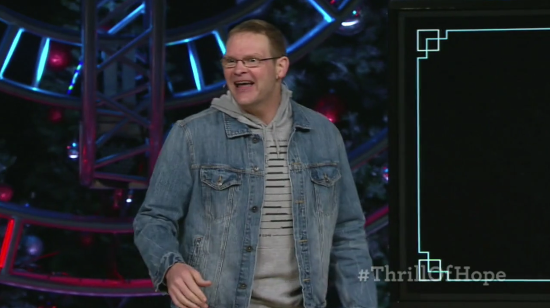 As I wrote at the time, I didn’t think Noble was being intentionally racist, but I know what I heard. The church denied that he said it, saying he just got his words jumbled… even though I have no clue what he *meant* to say.

It turns out he “apologized” during a recent sermon. Why do I put that word in quotation marks? Because he doesn’t acknowledge doing anything wrong.

After blaming people online for pointing out what he said, he tried to explain what happened:

Yes, he’s the real victim in all this…

And notice he never addresses whether or not he said that word. It may not have been what he *meant* to say, but the video’s right there. He said it. He didn’t apologize for saying it. He apologized for saying something we interpreted that way. Not the same thing.

I thought Andy Gill, a student at Princeton Theological, put it well (emphasis his):

Asking Noble to apologize, without passively blaming the victim or misinterpreters, for seemingly saying the “n-word” is a completely rational, and even biblical, move. He’s a public leader that is human and makes mistakes. Nobody is questioning his motive [at least I’m not]. I, personally, don’t think he should be fired but I do think he should be humble; a pastor who lacks humility and believes that because they are now an evangelical “celebrity” they’re some how exempt from reproach, in my opinion, should in fact temporarily step down — John Piper did this, and I respect that, I don’t remotely agree with his teachings but I respect his humility in confessing his pride [and because of this I’m willing to listen more often and more closely to him, regardless of my lack of agreeing with him].

I didn’t take Noble seriously before, but I sure as hell have no reason to do so now.

January 16, 2015
Pinellas County Sheriff's Office Will Auction Off "In Dog We Trust" Rugs for Charity
Next Post

January 16, 2015 Franklin County (Indiana) Officials Will Open Courthouse Grounds to Anyone Who Wants to Put Up a Display
Browse Our Archives
What Are Your Thoughts?leave a comment