Kirpan Controversy: Why Jerry Coyne Is Right and Hemant Is Wrong — Sikh Daggers Have No Place in Public Schools October 28, 2014 Terry Firma

Kirpan Controversy: Why Jerry Coyne Is Right and Hemant Is Wrong — Sikh Daggers Have No Place in Public Schools

Hemant wrote an eye-popping post yesterday in response to an article by Jerry Coyne about Sikh pupils habitually carrying ceremonial daggers called kirpans into U.S. public schools. My friend/colleague/boss argued that Coyne was wrong to object. Since kirpans are part of Sikhs’ religious requirements, Hemant thinks that we should accommodate Sikhs and their stabbing implements on religious-freedom grounds.

I respectfully disagree — completely. Below, I explain why in six points of rebuttal.

Hemant: “How quickly religious rights go out the window when we’re talking about people who aren’t in the majority.”

Me: Majority or minority status has nothing to do with it. Why would it? Let’s argue this on the merits, irrespective of whose superstitions are most popular.

So, to battle. Religious rights, you say? I call what you propose religious accommodationism. I’m only in favor of that when whatever is being accommodated extends to all pupils. If a school allows head coverings, the right to wear a hat should shouldn’t only be given to Jews wearing yarmulkes. It should also apply to Muslim students who want to wear the hijab … and to atheist students who feel like showing off their Flying Spaghetti Monster beanies. 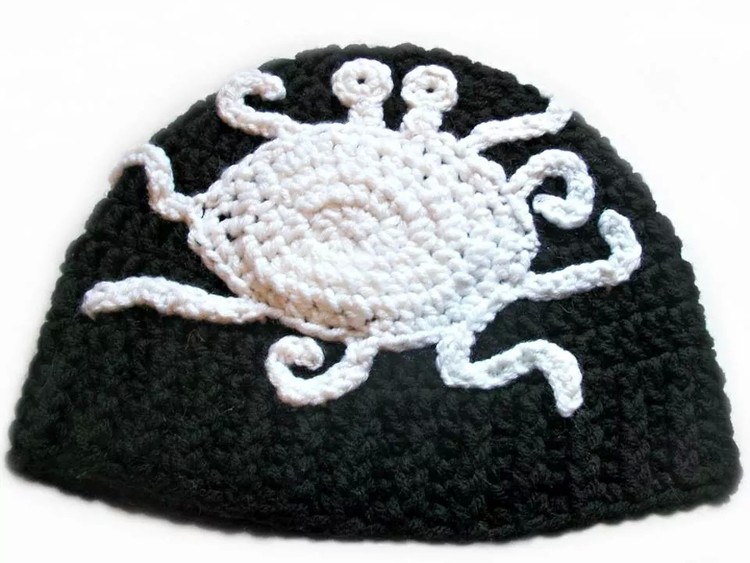 And if the school forbids hats in class, then that should apply across the board too, for everyone. That’s what “equal rights” is all about.

How many times have you written against carving out exceptions for one religious group or another, Hemant? Hundreds, surely. What’s so different about Sikhs?

Hemant: “If [kirpans] were to be banned, that would likely mean an end to all religious symbols (including cross necklaces).”

Me: I don’t see why. The kirpan is much bigger, heavier, and fiercer-looking than a Star of David pendant or a cross necklace. (OK, not this guy‘s cross necklace.) 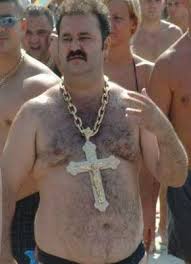 A kirpan also happens to be an actual weapon, unlike those other religious symbols.

For the record, if a Saudi Muslim exchange student wanted to carry a sword to school because it’s a sacred religious symbol depicted on his country’s flag and coat of arms, yeah, I’d have a problem with that, too.

And if, hypothetically, a Thor worshipper wanted to schlep a sledgehammer through his public school the live-long day… same deal.

Hemant: “The Kirpan is never to be used as a weapon. In fact, it’s offensive to Sikhs to refer to it as such… Outsiders see the Kirpan as a weapon while the Sikh faithful see it as a symbol of their faith.”

Me: In that case, I’m happy to be an outsider, because it allows me see things for what they are, rather than what the faithful insist I should see.

You’re one of the most level-headed people I know, Hemant, but I think you slipped up here. Not a weapon? Let’s say you’d never heard of Sikhism and its customs, and you saw this picture of a kirpan: 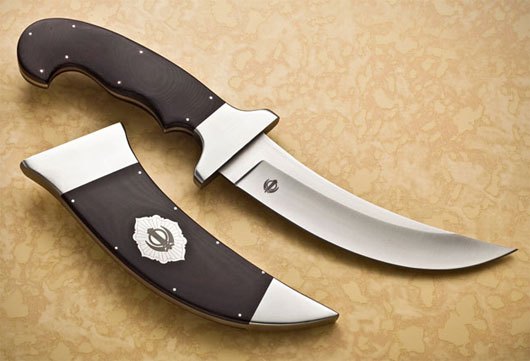 Would you call that a weapon or a mere “symbol”? If the latter, what do you think the outcome would be if you asked 100 reasonable people to answer the same question?

In any case, SikhiWiki, a kind of Wikipedia by and about Sikhs, states unabashedly that

The kirpan has both a physical function, as a defensive weapon, as well as a symbolic function.

That sounds good, but in practice there is nothing that distinguishes a defensive dagger from an offensive one; and were there such a difference, it still shouldn’t matter for purposes of this discussion, which I hope we’re having on the equal-rights principle of the thing.

Hemant: “There are plenty of potential weapons in schools that no one worries about because they expect them to be used properly — compasses, scissors, knives in art classes, etc. I don’t see why this would be any different.”

Me: Yeah, if you jab hard enough, you could even wound somebody with a stubby pencil. But a kirpan is a full-blade dagger with a solid handle. While I know that some are dull (on purpose), the thing is essentially made for stabbing and slashing. The blades have no prescribed length: Kirpans can be just a few inches in length, all the way up to three feet.

I don’t think three-foot kirpans, or even one-foot specimen, are typical, so we’re talking about weapons that are three to (let’s say) ten inches long. You could do far more damage (and far more quickly) with the average kirpan than with a compass or an art-class paper cutter.

If Sikh students would agree to carry miniature kirpans whose blades are no longer than that of an X-acto knife (about half an inch?), that might be OK in my book. But in that case, in the interest of equal treatment, other pupils ought to be permitted to carry similar short blades, too…

Hemant: “There are no instances, as far as I can tell, of school stabbings by Sikhs.”

I yield the floor to another atheist writer, James Kirk Wall:

Should a drunk driver not be arrested if he’s been driving drunk for years without incident?

Hemant: “The problem with… saying the same rule [against knives in school] must apply to everyone is that wearing the Kirpan is an explicit requirement of the Sikh faith (as is the requirement not to use it to hurt people).”

Me: Honestly, I don’t know why religious “requirements” would be a valid argument for anything that gives one group special rights over another. And I must point out that you seem to be a lot more accommodating towards Sikhs than you would be (and typically are) towards Christians who claim special rights.

To some extent, I get that. Western racists and ignoramuses of various stripes have unfairly and violently targeted Sikhs over the mere fact that they wear turbans, often confusing them with Muslims and mistaking them for “terrorists.” It’s kind of you to feel protective toward this group of believers (if that’s what’s going on). But the double standard bugs me.

Look, Sikhs don’t make me nervous in the slightest. They seem to form a generally peace-loving community. I don’t view them with suspicion, and I truly wish them the best. You write that opposition to kirpans in schools is inspired by fear and “incredible ignorance,” but I don’t think that’s fair. Not to me, not to the always thoughtful Jerry Coyne, and not to all the other atheists and agnostics who aren’t motivated by base fears or lack of knowledge, but by the proposition that secular and religious people simply have the exact same rights and obligations.

As for Sikhs not using their sacred blades to inflict violence, I hear you, and I don’t foresee (m)any problems in that regard. Then again, someone forget to tell these Sikhs in Queens, NY, about their holy duty. And also, these Sikhs at the Golden Temple in India, who are seen furiously hacking and slashing at each other in yet another fine display of superior religious morality. 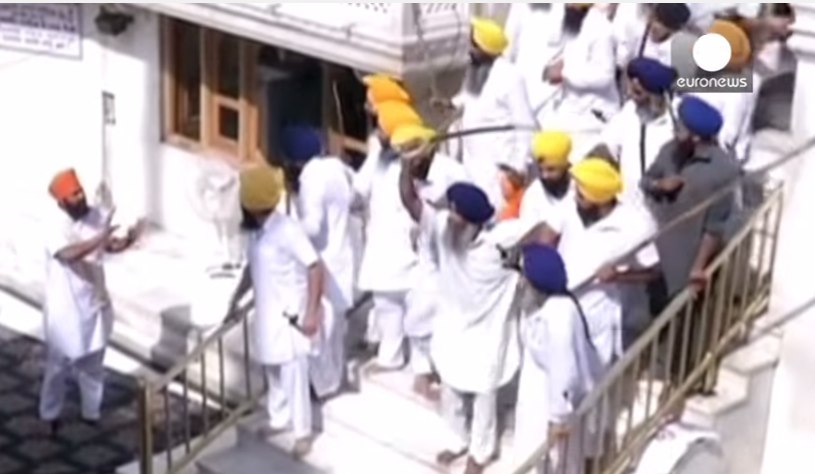 Now, given your accommodating stance, shall we also allow Sikhs, and only Sikhs, to carry daggers into courtrooms? Canada began allowing just that last year. And how about airport security? Do we permit passengers of the correct god persuasion to carry daggers or swords on board? Or is that the point where 300,000 U.S. Sikhs’ “deeply held beliefs” should yield to rules and regulations that truly apply to all of us?

Like you, I remain in favor of religious rights … but not religious privilege. To me, that means that if Sikh parents want their children to carry daggers in class, I’m all for it — as long as they do it in their own (private) schools. In public schools, and in places like airports and courtrooms, Sikhs will, I hope, continue to be 100% welcome … provided that they follow the same rules that others are required to. If they can learn to compromise (for instance, they could carry a blunt wooden kirpan, or an inch-long sealed kirpan worn as a pendant), so much the better.

U.S. Sikhs should seriously ponder leaving their sacred silverware at home when appropriate. With any luck, they’ll eventually come to appreciate the luxury of having a government that — what a concept! — is constitutionally obliged to decline playing favorites.

(Top image via Absence of Clothing)

October 28, 2014 Apparently, No One Understands That Catholics Are Generally Accepting of Evolution...
Browse Our Archives
What Are Your Thoughts?leave a comment