Six Reasons the PhotoMath App Isn’t As Cool As You Think It Is October 23, 2014 Hemant Mehta

By now, you’ve probably seen the amazing video about an app called PhotoMath. Once you download it, you can take a picture of a math problem with your phone… and the app not only solves the problem, it shows you how to do it step-by-step. Everyone seems to be talking about it. 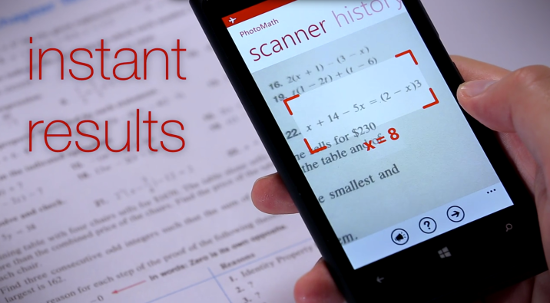 How cool is that?!

Not very, actually… and here’s why:

Take a look at the reviews for the app and you’ll find a lot of five-star reviews… by people who haven’t actually used the app but simply love the concept: 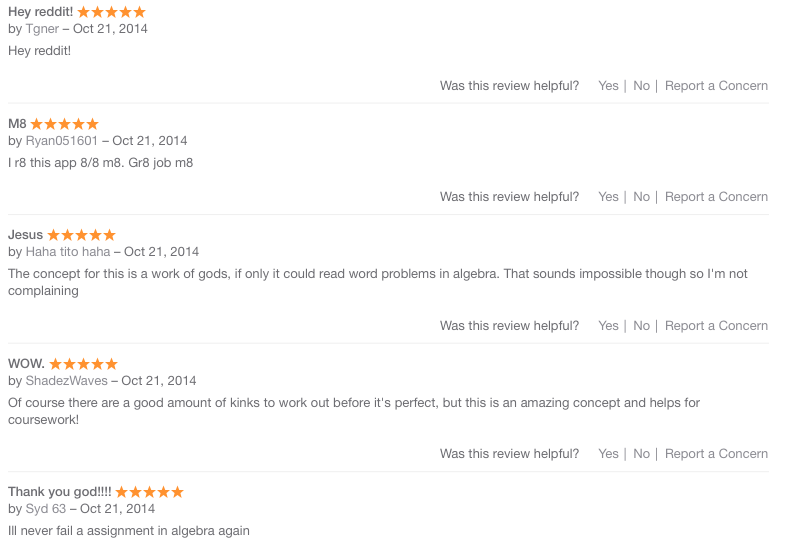 And what about the people who have used it? They say it doesn’t work like it’s supposed to: 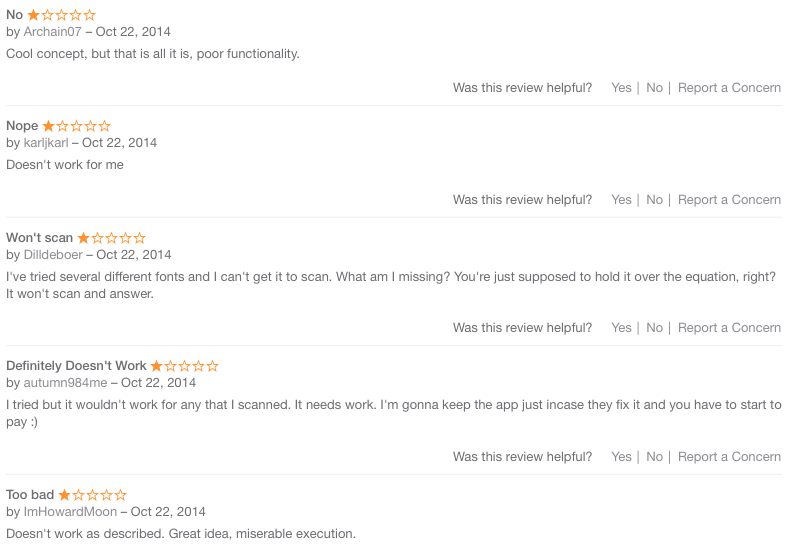 Math education blogger Dan Meyer points out that one of the “correct” sample problems used in Yahoo Tech’s review of the app is totally wrong.

The picture below is supposed to show a problem that works with the app (on the left) and one that doesn’t (on the right): 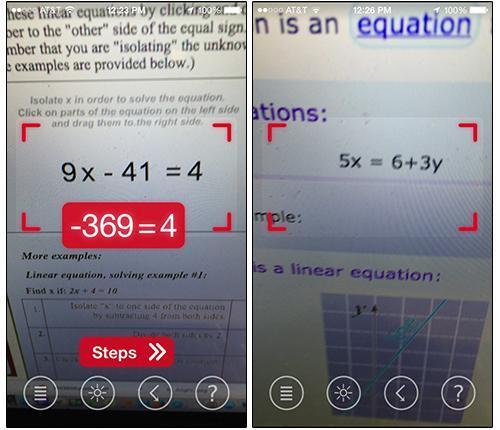 The “answer” on the left makes no sense. If you solve for the variable like you’re supposed to, then x equals 5. (Just ask an algebra student.) The app didn’t recognize what the question was asking.

But even if the app confused the variable for a multiplication symbol — which is a pretty big problem, don’t you think? — the solution is still wrong since, mathematically speaking, -369 and 4 are not equal to each other.

So even when the app “solves” a problem, it doesn’t necessarily mean that solution is perfect.

When I was teaching this material, there’s no way I would even allow students to use a calculator on problems this basic. Does anyone think teachers will let students use a phone? Forget it. Cheating is rampant enough as is.

Plus, I want students to show me they understand the math skills. I don’t care if they can just spit back an answer.

But maybe that doesn’t matter, you say. It’s still a helpful teaching tool!… which leads to my next point:

The best thing the app has going for it is that it looks awesome. But math classes are not going to change as a result of this app.

If you want straight-up answers, most textbooks already give them to you in the back of the book.

If you want step-by-step directions on how to solve the problems, just flip back a few pages and find the nearly-identical sample problems earlier in the chapter.

The only thing this app can do — if everything is working perfectly — is give you step-by-step directions for a specific problem or an answer that’s not in the back of the book. That’s very nice… but at best, that’ll help you with about a couple days’ worth of material.

Good luck the rest of the semester.

I typed the problem we just saw in the Yahoo Tech review into Wolfram Alpha. Not only did the software solve it, it gave me *way* more information than I requested. And if I upgrade to the premium version, it’ll give me the step-by-step directions, too. 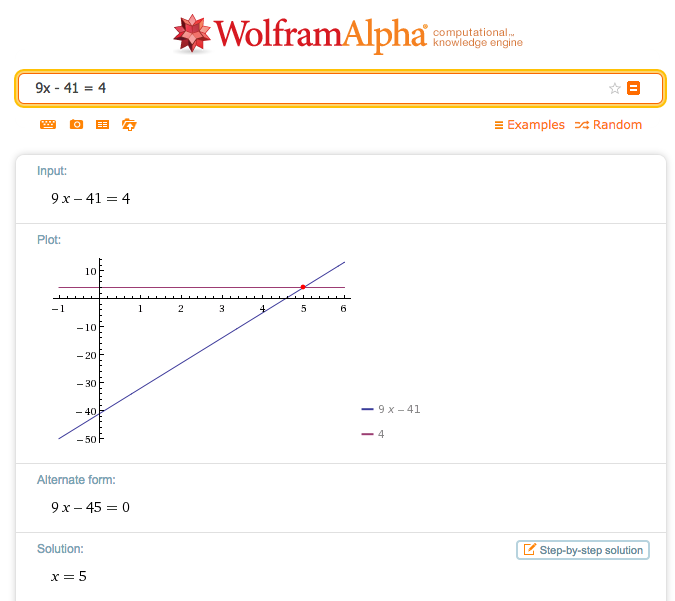 I also typed in the problem that Yahoo Tech’s writer said the PhotoMath app could not solve: 5x = 6 + 3y.

Wolfram Alpha had no problem with it whatsoever: 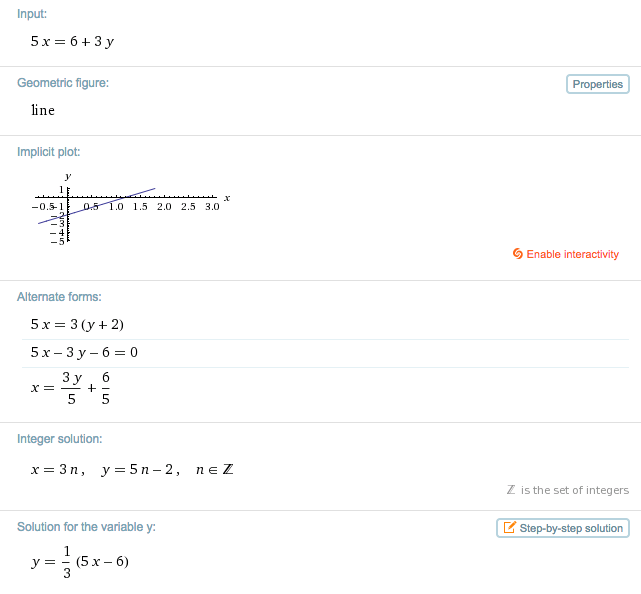 This is really the biggest problem with the app. It only solves basic problems, not any of the interesting ones you want students to spend their time on.

Dan Meyer actually welcomes that aspect of the app:

… the only problems PhotoMath could conceivably solve are the ones that are boring and over-represented in our math textbooks.

It’s conceivable PhotoMath could be great for problems with verbs like “compute,” “solve,” and “evaluate.” In some alternate universe where technology didn’t disappoint and PhotoMath worked perfectly, all the most fun verbs would then be left behind: “justify,” “argue,” “model,” “generalize,” “estimate,” “construct,” etc. In that alternate universe, we could quickly evaluate the value of our assignments:

“Could PhotoMath solve this? Then why are we wasting our time?”

Ultimately, I’m sure students will rush to download PhotoMath the moment they hear about it, but that excitement will fade away a few minutes later, once they realize it only solves the problems they already knew how to do.

October 23, 2014
Researchers Find That No Facts Whatsoever Will Change Anti-Vaxxers' Minds. The Same May Be True For You and Me
Next Post

October 23, 2014 Middle School Survey on Character Strength Includes Questions About How Much Religious Faith Students Have
Browse Our Archives
What Are Your Thoughts?leave a comment