If This Guy’s the Poster Boy for Golden State Baptist College, I’d Hate to Find Out Who the School is Ashamed Of… September 22, 2014 Hemant Mehta

If This Guy’s the Poster Boy for Golden State Baptist College, I’d Hate to Find Out Who the School is Ashamed Of… 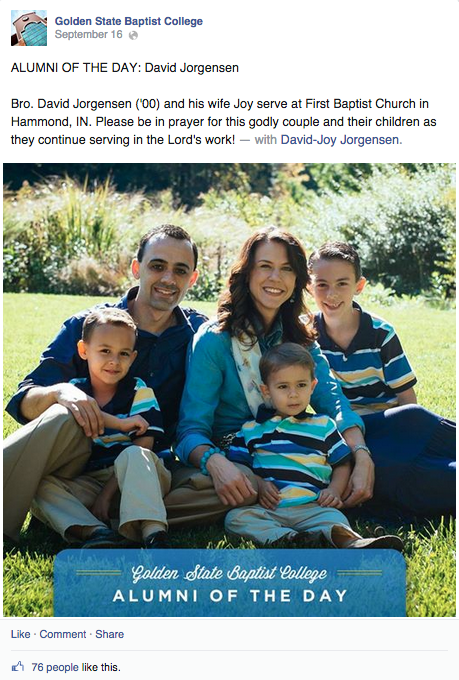 … maybe you should make sure he didn’t commit “lewd acts” on a 14-year-old girl when he was just starting out as a pastor:

The church is also being sued in local court for a 2002 incident where then-teacher and associate pastor David Joseph Jorgensen committed lewd acts on a female student when she was 14.

According to the anonymous plaintiff’s complaint, Jorgensen initiated inappropriate contact on her 14th birthday in April 2002. She claims he exploited her immaturity and abused his position of authority at the church to take advantage of her.

Jorgensen pleaded no contest in May 2003 to two felony counts of committing lewd acts upon a child, according to online court records. After he completed probation, he sought to have the crimes reduced to misdemeanors and had his record expunged in September 2006.

The victim is suing the church and [senior pastor] Tim Ruhl for being negligent in hiring and supervising Jorgensen. She also claims that Ruhl failed to report Jorgensen’s actions when she told him about it. The woman also alleges that Ruhl retaliated against her by expelling her six months before graduating high school and later claiming she was having a child out of wedlock.

According to Baumbach, when the allegations first came to light, the woman was forced to repeat her claims in a meeting with Ruhl and Jorgensen. Jorgensen denied the claims and accused her of lying.

Eventually, the woman’s mother had her take a polygraph, which she reportedly passed.

According to a deposition of Ruhl, Ruhl said he confronted Jorgensen after the mother reported the results. Jorgensen admitted to the allegations and was terminated.

David Jorgensen: “Alumni of the day.” Doing the Lord’s work. A graduate of Golden State Baptist College. And a despicable human being.

September 22, 2014
After 16 Years and 7 Kids, This Quiverfull Mother Got a Divorce from Her Abusive Husband (and Left Jesus, Too)
Next Post