Seven Tips for Coming Out as an Atheist June 28, 2014 Hemant Mehta

Seven Tips for Coming Out as an Atheist

This is a guest post written by David G. McAfee. 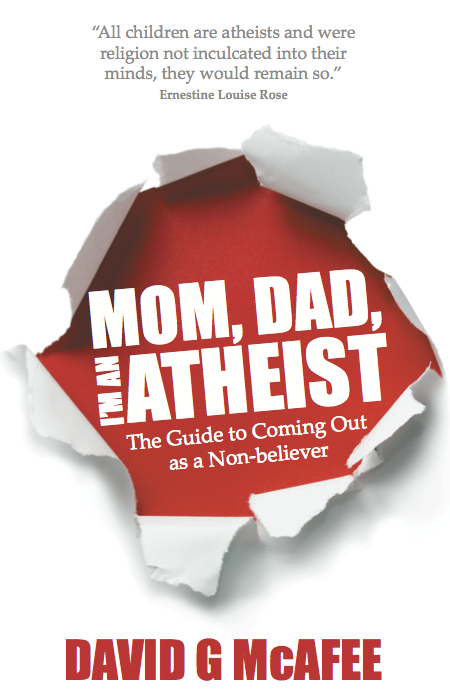 Coming out as an atheist doesn’t only apply to those who are new to non-belief, and it’s not just a one-off personal event only involving close family. Public non-belief means many different things to many people but, in a society that’s largely intolerant of faithlessness, it’s always an ongoing process that arises again each time an atheist is asked about his or her beliefs — or lack thereof.

While some consider coming out as an atheist to be about familial honesty, still others are more concerned with publicly rejecting dogma around friends, classmates, or colleagues. But regardless of the situation, coming out as an atheist makes it a bit easier for the next person who has to by working to change the (very false) perception of atheism as something that is anti-god or even pro-evil. Perhaps more than anything else, it gives the opportunity to educate believers — to show them that it is entirely possible to be morally good without believing that we are being policed by an all-knowing deity.

It’s important to note, especially for young non-believers growing up in religious homes, that if you’re comfortable with your current living situation, it might not be necessary to “rock the boat” until you’re older. That being said, if it’s possible to be honest with family without serious repercussions, I wouldn’t discourage it. In all cases, the decision to come out is completely dependent on an individual’s circumstances.

Here’s a list of seven tips for coming out as an atheist, inspired and excerpted from my book Mom, Dad, I’m an Atheist: The Guide to Coming Out as a Non-believer.

In many cases, the first step to coming out is to determine exactly what you hope to gain from being open about your lack of belief. Do you care about convincing your family that you can be happy without religion? Are you interested in being able to speak openly with friends and acquaintances about religion without hiding your opinions? While it is often considered general etiquette to not discuss politics or religion in order to preserve personal and professional relationships, that doesn’t mean that the topic never arises. It’s always best to look at each of your relationships and weigh the benefits and consequences of coming out individually to see what your best option is.

Negative stereotypes about atheism reinforce the negative stigma associated with non-belief, so demolishing those assumptions is key. Helping to dispel the myths of non-belief among many religious communities is an important task, and with more people deciding to take the crucial step of declaring their disbelief than ever, believers are likely to see that “atheist” is not synonymous with “Satanist,” and that non-believers are not “god-hating sinners.” People will start to see that their neighbors or children or dentists don’t see evidence for belief in archaic superstitions, so maybe it is not that bad after all.

Coming out as an atheist means more than simply telling religious family members about a lack of faith or a loss of faith; in many cases, even people who come from non-religious upbringings have to confront the issue with friends, colleagues, acquaintances, and, in some cases, all of the above. As such, coming out is not necessarily a one-time event, but should instead be considered an ongoing process throughout one’s lifetime. As is the case with “coming out” in the LGBT (Lesbian, Gay, Bisexual, Transgender) community, it is never enough to simply come out once to your family. If you truly want to be an out-of-the-closet non-believer and, perhaps, in the process help other closeted atheists who may be afraid to voice their skepticism, it is sometimes necessary to confront those in day-to-day life who may assume your religiosity or project their religious ideologies onto you.

Some relatives and close friends might be more understanding than others; it is advisable to seek these people out for starters. You may want to “test the waters” in this regard by casually bringing up the topic of God and/or religion to those people closest to you whose religious preferences are unknown to you or you imagine might be sympathetic to your cause. It is not the case that all believers will condemn you; there are many open-minded believers who will not see your atheism as inherently bad or offensive. Sometimes, you will be surprised to find that people you have known your entire life and assumed to be religious are, in fact, skeptics or unconcerned with “divine” matters altogether; this can be a welcoming initial interaction for those who might be scared of judgmental reactions and stressed personal relationships with fundamentalists in the family.

Religious family members may be upset to hear about your lack of faith in the tradition that they practice, but time will always help those who truly love you understand and accept that their religion simply doesn’t reach the burden of proof necessary to warrant lifelong dedication — in the opinions of you and countless others. The time it often takes family members to understand this change is exactly why planning to express your doubts in religious institutions as early as you begin having them is such an important element in any transition to becoming openly non-religious — and making sure that your doubts are not misunderstood.

From weekly church services and gatherings to summer camps and holiday events, a religion often fosters a sense of community for its followers. Many people who transition out of a religion and were previously involved in the social aspects of their religious traditions find this to be one of the most difficult parts about leaving the faith. Having likeminded friends and social acquaintances is important, especially when a non-believer’s current friends and family are not supportive of his or her religious stance. As is the case in all instances of discrimination or social tension, talking and sharing ideas with people who face similar issues is a helpful therapeutic tool. Talking openly about your non-belief with nonjudgmental people you already know is obviously ideal, but there are also a number of local and online groups created specifically for this purpose.

Confrontation is a natural part of any interaction involving a member of a family dissenting from the others, especially when it comes to the topic of religion or politics. But, on a more fundamental level, confrontation results from these religious discussions for one simple reason: You’re telling them that their most fundamental beliefs are wrong. If there is a familial confrontation as a result of your coming out, it may help to make it known that you aren’t seeking to change the way they think, but instead that you should have the same freedom from religion that most modern governments guarantee their citizens. The fact that, as an open atheist, you are telling believers they’re wrong does not necessarily mean that it is a bad thing. In a modern context, being able to voice your opinions and challenge those of the majority is critical. If a situation arises in which the conflict is out of control, it is always best to seek professional guidance in the form of therapy and/or counseling.

David G. McAfee is a journalist and author of Mom, Dad, I’m an Atheist: The Guide to Coming Out as a Non-believer. He is a columnist for Canadian Freethinker Magazine and a contributor to American Atheist Magazine. Mr. McAfee attended University of California, Santa Barbara, and graduated with bachelor’s degrees in English and Religious Studies with an emphasis on Christianity and Mediterranean religions. After experiencing discrimination within the American public education system as a result of his secular activism, David G. McAfee sought to publish Mom, Dad, I’m an Atheist to help those who fear similar professional or familial consequences to their public non-belief.