Why Brandeis University Is Comically Wrong On All Counts in the Ayaan Hirsi Ali ‘Hate Speech’ Flap April 9, 2014 Hemant Mehta

This is a guest post written by Rogier van Bakel.

Last night, this blog published a post about Brandeis University’s decision to revoke Ayaan Hirsi Ali‘s honorary doctorate in Social Justice. The university had belatedly decided that Hirsi Ali, a hard-bitten critic of Islam, does not represent the values Brandeis supposedly holds dear (more on that in a minute).

I play a minor role in this fiasco.

The successful student petition that preceded the snub contained some quotes from a Reason interview I did with Hirsi Ali in Washington back in 2007. Those quotes, without their context, sounded harsh, although they might have made some people blanch even within their context. 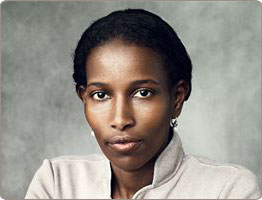 Having read her books, I met Hirsi Ali for lunch expecting to find mostly common ground, but our interview soon became a bit uncomfortable, even contentious. She was an impressive interviewee, who rattled off, in perfect English (not her first language), various precise, well-thought-out reasons why Muslim immigration in Europe is entirely different from Muslim immigration in North America.

At other times, such precision succumbed to broad-brush pronouncements that soon had me, a fellow atheist and longtime critic of Islam, pushing back a bit. Hirsi Ali claimed that the West is at war with Islam — not with extremist Islam, but with all of it. She said it must be crushed and left the door wide open to military options. A little while later, she added that, were it in her power, she would close down Islamic schools in the West, to thwart the spread of radical ideas.

I also understand that Hirsi Ali sees herself as a polemicist, someone who seeks the knife’s edge of her own argument and isn’t shy about advancing it. Courting controversy that way — as Christopher Hitchens habitually did, as Sam Harris sometimes does — is not a bad way to get people to pay attention to an important discussion, although the approach runs the perennial, calculated risk of alienating some and infuriating others.

For the record, yesterday’s Brandeis decision to deny her a promised honorary doctorate rubs me the wrong way. It’s galling that the university administration caved so readily and spinelessly to the self-appointed troopers of political orthodoxy.

But I also find the whole thing comical on several levels — all of which, despite the mirth, are damaging to Brandeis. The honor of bestowing the doctorate would have been the university’s as much as Hirsi Ali’s, if not more so. Brandeis just shot itself in the left foot over that aspect — after having already fired a bullet through the other, as no one at the school apparently knows how to use Google. It would be different if the withdrawal of the offer had been the result of some secret document or some just-surfaced e-mail exchange; but of course Hirsi Ali’s opinions are the farthest thing from a secret and our interview has been on the Reason website continuously for well over six years. Sounds like somebody didn’t do his or her homework. What’s the punishment for that at Brandeis? A lot of raw egg, I suppose, all over the institution’s face.

It’s also entertaining how much Brandeis wants to have its cake and eat it too. Here’s a statement from 2006, made by the then-president of the university:

Brandeis bestows honorary degrees as a means of acknowledging the outstanding accomplishments or contributions of individual men and women in any of a number of fields of human endeavor. Just as Brandeis does not inquire into the political opinions and beliefs of faculty or staff before appointing them, or students before offering admission, so too the University does not select honorary degree recipients on the basis of their political beliefs or opinions.

That was in response to the brouhaha over Brandeis offering an honorary doctorate to the playwright Tony Kushner, an aggressive foe of Israel. As David Bernstein observes in the Washington Post,

[J]uxtaposing the Kushner and Ali situations, it turns out that the university does award honorary degrees based on the potential honoree’s opinions.

Apart from the hypocrisy of Brandeis saying one thing and doing another, it’s deplorable that free inquiry and free expression take such a backseat to ingrained political doctrine here — at a school that sees itself as one of the top universities the country.

Hirsi Ali sounded a similar note today when she responded with shock and ire to the Brandeis disinvitation:

What was initially intended as an honor has now devolved into a moment of shaming. Yet the slur on my reputation is not the worst aspect of this episode. More deplorable is that an institution set up on the basis of religious freedom should today so deeply betray its own founding principles. The “spirit of free expression” referred to in the Brandeis statement has been stifled here, as my critics have achieved their objective of preventing me from addressing the graduating Class of 2014. Neither Brandeis nor my critics knew or even inquired as to what I might say. They simply wanted me to be silenced.

Or, at least, disparaged and marginalized. I agree fully with Hemant on this score:

It takes a very uncharitable interpretation of Hirsi Ali’s words to think her goal of “defeating Islam” means we should commit violence against peaceful law-abiding Muslims or descends into hate speech. Her goal is full-scale reform of Islam, not genocide against all Muslims.

One more thing: What do you think would have happened if Ayaan Hirsi Ali had been a harsh and implacable critic of Christianity, rather than Islam? My guess is that hardly anyone at Brandeis would’ve batted an eyelash. I’m not exactly a fan of Christianity myself, but if you’re going to shrug over unkind invective against one religion, why draw the line at another? If anything, Islam, overwhelmingly stuck in the dark Middle Ages with a mentality hostile to the Enlightenment, deserves a much more vigorous response from secular humanists and atheists than Christianity does. And that’s precisely where Hirsi Ali has directed her barbs.

If the academic left wants to be free from the stain of the double standard, it should stop reflexively “protecting” Islam, and start giving serious consideration to the perspective of social activists like Hirsi Ali, who have experienced Islamist ideology from within and aren’t afraid to tell us about it.

April 9, 2014 A Podcast Interview with Skeptic Money On Air
Browse Our Archives
What Are Your Thoughts?leave a comment