An Underage Bride… in the Bible

There’s a wonderful, hilarious book called Illustrated Stories from the Bible (that they won’t tell you in Sunday School) by Paul Farrell, published by American Atheists Press, that’s pretty self-explanatory. 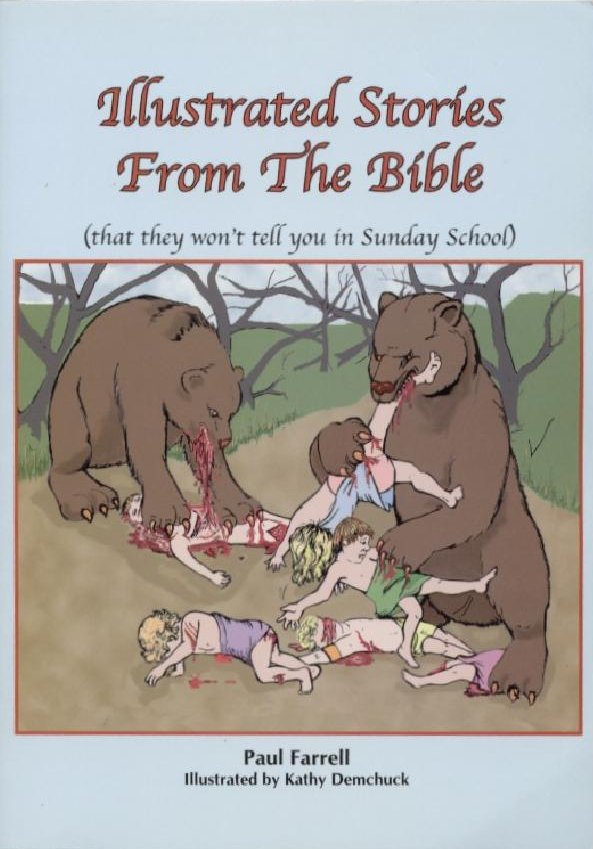 The book tells all those gruesome, despicable, disturbing stories that pastors love to gloss over lest people think the Bible isn’t really a Good Book.

Of course, that book is geared toward adults. Just as it should be.

But what if it was aimed at children? What if those horrific stories were sugar-coated and taught to kids?

That’s the gist behind Kind Little Rivka, a “beautifully illustrated account of how Abraham’s trusted servant Eliezer chose Rivka to be Isaac’s wife — all because of her kindness.”

Just one thing: When Rivka (a.k.a. Rebekah) was chosen to be Isaac’s wife, she was only three-years-old.

It turns out this book was glorifying an underage marriage — and I was shocked by its content and images.

The book begins innocuously enough. “One day, when Rivka was three years old, she decided to go down to the well ….”

Next, it takes a creepy turn:

That very same day … a man named Eliezer began walking with ten camels … The camels were loaded with bags full of presents; shiny golden bracelets … and just about anything a little girl could want… Eliezer was looking for a kind and special girl to be a wife for Yitzchak… ‘When I find the right girl, she will get all of these wonderful presents,’ thought Eliezer.

When Eliezer gets to the well there is a disturbing illustration of a grown man stroking his beard glaring at several small children at the well.

He wonders, according to the dialogue, “Which one will be the right wife for Yitzchak?”

If my daughter sees a grown man with “shiny golden bracelets” staring at her by a well, she should run and scream. This is a scenario we teach our children to avoid, not one we highlight as acceptable.

Federman spoke with the book’s author, who doesn’t really see the problem with any of this:

[Dina] Rosenfeld said in an email interview that the question of age-appropriateness had never come up before — and claimed that the child was only selected for marriage at age three, and is not actually wed at that young age.

That’s… umm… not any better. We would easily demonize any old man who selected a three-year-old child for marriage… but, in the context of the Bible, it’s seen as perfectly normal.

This is just another example of how the Bible distorts the idea of morality. We shouldn’t look to it as any sort of ultimate authority on virtue because it fails at it time and time again.