Jesse Ventura: ‘I’m An Atheist. And I’m Proud To Say It.’

Alright, this isn’t really “news” since we already knew former Minnesota Governor Jesse Ventura was an atheist, but he talks about it in some depth in an interview with Highbrow Magazine. He was promoting his awkwardly-titled new book DemoCRIPS and ReBLOODlicans: No More Gangs in Government. 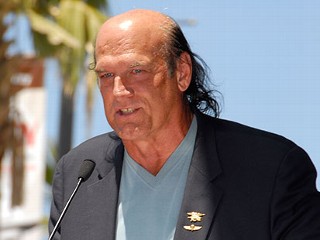 When you were governor, you refused to declare a National Prayer Day. I bet the right-wing fundamentalists were furious.

Absolutely. The Minnesota media just grilled me. They went, “How come every other governor is declaring National Prayer Day and not you?” And that’s when I said, “What do you need me to tell you to pray for?” I’ve come out of the closet now: I’m an atheist. And I’m proud to say it. I’m a follower of George Carlin.

We lost a great voice when we lost George, but here’s what George believed in: George worshipped the sun. And I do too. Because the sun, and I’m paraphrasing George, gives me heat, the sun gives me food, the sun makes me warm, the sun does everything I want. It’s a wonderful thing, and most of all, every morning I can get up and see it come up, which gives it great credibility — knowing the sun exists.

Don’t get me wrong: Other people are free to believe in God; they’re free to practice their religion; I don’t begrudge them that. That’s the one thing I give kudos to President Obama for. When he took office and he did his state address, he listed Christians, Muslims, Jewish [believers] — he went down the line, and the last thing he said was “and non-believers.” I jumped out of my chair, I said, “My God, we’re legal now.” The president has finally acknowledged that there are people who don’t believe in a supreme being.

I’m interested in conversion stories. Was there a defining moment when you became an atheist, or was it a gradual progression toward that perspective?

It was a gradual progression, but the defining moment was when I saw Christopher Hitchens on Bill Maher’s [show], and he was wearing a funny T-shirt that said “I’M AFRICAN-AMERICAN.” Because if you go back, and if you believe in evolution, the first known man came out of Africa. And if you trace us back that far, aren’t we all African-Americans? He had that T-shirt on and Christopher said, “It’s time for us atheists to come out of the closet.” It is time for us to stand up and proudly say that we are atheists. So I said, you know what? He’s right.

Anyway, Hitchens was right: Say you’re an atheist and be proud of it!